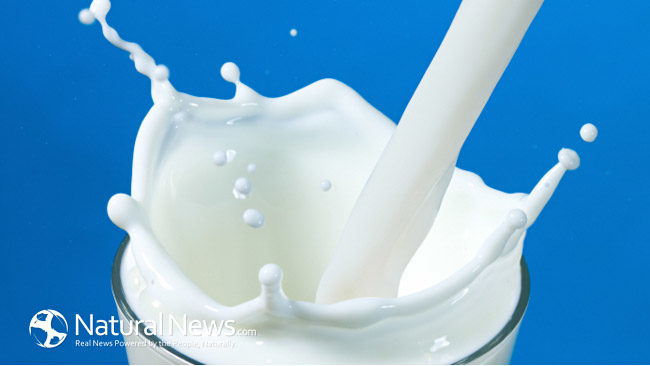 Until the early part of the 20th century, raw milk – natural, untreated milk straight from the cow – was considered a medicine for a plethora of chronic diseases. Even in the tropics, long before refrigeration was invented, raw milk was an essential and safe food source for many cultures. It was regarded as “white blood,” a kind of “stem cell” of foods, and people understood that in trying circumstances, you could live on it exclusively and remain perfectly healthy. After all, just as eggs contain all the nutrients needed to nourish a growing chick, raw milk contains all the nutrients needed to nourish a growing calf; it needs to be a near-perfect food.

Below is a list of reasons why raw cow’s milk enjoys such a positive, time-honored reputation. Throughout the list, comparisons will also be made with processed (i.e. pasteurized and homogenized) milk.

A complete protein – Raw milk contains all 22 amino acids, including the eight essential amino acids needed for the complete metabolism and function of protein. This makes raw milk a perfect protein source, and especially good for growing children and bodybuilders. The proteins in processed milk, however, don’t fare as well. The milk’s biological value is reduced by 17 percent because the heating process damages at least two of these amino acids (lysine and histidine). Moreover, this damage to the amino acids’ identity negatively affects their absorption rate in the body.

Rich in vitamins – Raw milk is rich in fat-soluble vitamins A, B, C, D, E, K – the entire vitamin spectrum. It is a particularly potent B vitamin complex, with all the major B vitamins, from biotin to B12, represented. In treated milk, though, vitamins A and C are completely destroyed (infants fed pasteurized milk exclusively actually develop scurvy), while pasteurization destroys approximately 38 percent of the milk’s all-important B vitamins. Vitamins D, E, and K appear to survive the heating process.

Healthy fats – Raw milk contains all 18 fatty acids (saturated and unsaturated) that are metabolically available to us, including conjugated linoleic acid, a much-needed omega-6 fatty acid. These fats – which our bodies cannot make themselves – aid cellular metabolism, the formation of healthy cell membranes, brain and endocrine system function, and much more. Processed milk, on the other hand, is a different story. While pasteurization is bad enough (it compromises the milk’s fat content), homogenization – a truly unnatural process that presses milk fats into smaller globules – actually oxidizes these fats, making them carcinogenic and toxic to the body.

Bursting with enzymes – Raw milk contains over 60 known enzymes that perform a multitude of tasks in our bodies. Some of these enzymes, such as lipase, are native to milk and help us digest it properly. Other enzymes, such as catalase, lysozyme, and lactoperoxidase, help protect the milk from bacterial infections. In treated milk, many of these enzymes are completely destroyed, including lipase – the very enzyme needed to digest milk properly.

Rich in minerals – Raw milk contains a large number of metabolically-available minerals. Some of these are well-known macro-minerals such as calcium, magnesium, and phosphorus, whereas others are important trace minerals such as iodine. Since minerals work in tandem rather than in isolation, disrupting the mineral compositions of whole foods such as milk can lead to numerous problems. And can you guess what happens to treated milk? Yes; having had its precious minerals compromised by aggressive heating and pressing treatments, the milk becomes toxic. Its total amount of soluble calcium is especially affected, and since phosphorus and magnesium need calcium to function properly (and vice versa), you can see how this nutritional instability can cause a chain reaction of problems in our bodies.

High in beneficial cholesterol and carbohydrates – Raw milk contains about 3 milligrams of cholesterol (an important repair substance) per gram, as well as decent amounts of soluble carbohydrates. The primary carbohydrate in cow’s milk is lactose, which makes up approximately 2-8 percent of milk by weight. Individuals with lactose tolerance cannot make this enzyme, and thus cannot digest milk sugar. However, since raw milk (unlike treated milk) retains its lactose-digesting Lactobacilli bacteria, people with lactose intolerance often have no problems drinking it.

The best sources of raw milk are local organic farmers. Many organic farms have stores on their websites through which you can purchase raw milk online and have it delivered to your door (raw milk freezes well, so bulk orders aren’t a problem). If you simply cannot access raw milk, or if it’s illegal in your country/state, consider organic almond or coconut milk instead.