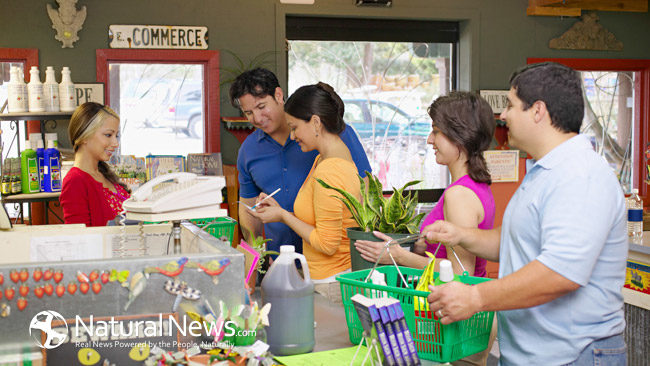 Each year, close to 48 million Americans suffer from food-related illnesses. Most Americans actually eat fake food, according to a variety of health organizations and advocates.

There’s an enormous amount of fraudulence in the food industry, according to author and restaurant columnist, Larry Olmsted. Fake food sold in supermarkets, grocery stores, and restaurants may be considered a valid reason why millions of people get ill after they eat.

In Larry Olmsted’s new book titled, “Real Food/Fake Food: Why You Don’t Know What You’re Eating and What You Can Do about It,” he writes fake food is a massive national problem.  And the more educated consumers are, the more vulnerable they become — being deceived into buying fake food at restaurants and grocery stores.

In 2014, the specialty-foods sector — including oils, cheeses, booze, and gourmet meats — generated over $1 billion in revenue in the United States.  An alarming amount of food most people buy is fake food — masqueraded — and containing hidden ingredients harmful to our health.

One of the fastest-growing and most popular foods in the U.S. is olive oil.  Italian olive oil is a multi-billion-dollar global industry.  The U.S. is its third-largest market.

Olive oil is hyped up for its ability to prevent practically every ailment, including cancer, heart disease, and wrinkles.  However, the majority of olive oil imports are fake. According to Olmsted, most Americans have never actually tasted real olive oil.

“Once someone tries a real extra-virgin — an adult or child, anybody with taste buds — they’ll never go back to the fake kind.  It’s distinctive, complex, the freshest thing you’ve ever eaten. It makes you realize how rotten the other stuff is — literally rotten.”

Most Americans use extra-virgin olive oil on salads that is probably cut with sunflower or soybean oil — plus a variety of chemicals.

Olive oil’s most common additives are soybean and peanut oils.  These additives can cause adverse health effects to anyone with an allergy.  They can also be fatal.  But those ingredients are not printed on the label. And olive oil labeled “pure” — can mean the oil is the lowest grade possible.

Olmsted notes, “No one is checking.”

The seafood industry has an even greater level of fraud, according to Olmsted.  The author is referring to a 2012 study of New York City seafood done by scientists at the nonprofit advocacy group, Oceana.

An excerpt from Oceana’s report reads as follows:

“Everywhere seafood is tested, fraud has been found. In fact, Oceana and others recently found shocking levels of mislabeling in the Boston (48 percent), Los Angeles (55 percent) and Miami (31 percent) areas. In 2012, Oceana also investigated seafood mislabeling in the New York City area as part of its Campaign to Stop Seafood Fraud. Despite frequent reporting on the issue for more than 20 years, Oceana found that 39 percent of the 142 seafood samples collected and DNA tested from grocery stores, restaurants and sushi venues were mislabeled, according to the United States Food and Drug Administration (FDA)guidelines.”

Seafood fraud puts people at risk — including pregnant women.  High levels of mercury in fish are known to have caused birth defects.  And allergic reactions to shellfish have been known to cause paralysis.

White tuna is probably escolar — also referred to as “the Ex-Lax fish” for the gastrointestinal disorders it creates.  For nearly 40 years, Japan has banned escolar because it’s so toxic.  However, escolar is secretly one of the top-selling fish in America.

Corruption in the seafood industry is so widespread that in 2014, President Obama formed the Presidential Task Force on Illegal, Unreported, and Unregulated Seafood Fraud.

Olmsted is extremely dissatisfied with respect to the lenient labeling standards in the U.S.

Olmsted expressed his concern about this issue.

“The bar is so low.  Congress could not have given them less to do, and they still fail. They’re not clueless. They know. They’re actually deciding not to do it. They say they don’t have the budget.”

“All the gross details you have heard about industrial cattle farming — from the widespread use of antibiotics and chemicals to animals living in their own feces and being fed parts of other animals they don’t normally consume — occurs in the seafood arena as well.  Only it is much better hidden.”

Olmsted claims that the U.S. Department of Agriculture (USDA) is no better when it comes to beef.  Olmsted writes the agency repealed its standards for the “grass-fed” designation in January after getting pressure from the agriculture industry.

But that “grass-fed” label on meat now means that in addition to being grass-fed, the animals “can still be raised in an industrial feed lot and given drugs. It just means the actual diet was grass rather than corn.”   There’s likely no such thing as 100 percent grass-fed beef — it’s very probable that cows are still being pumped full of drugs and raised in a cramped feedlot, according to Olmsted.

Olmsted advises; if you don’t have access to a farmer’s market, look for reliable providers of true grass-fed beef.

“You have access to a lot of specialized gourmet stores, and you can source stuff locally. You can’t do that in most of the country.”

Here’s How to Know What to Look For

How do we find the real thing?  Olmsted says, “The good news is that there is plenty of healthful and delicious real food. You just have to know where to look.”

One of the simplest things you can do is to look for products named after their geographical location.

For example, Grated Parmesan cheese is almost always fake.  In fact, earlier this year, the FDA said they found that some dairy products labeled “100% Parmesan” contained wood pulp and polymers.  Unfortunately, the FDA didn’t go much further after this discovery: You can still buy woody cheese at the grocery store.

On the other hand, Parmigiano-Reggiano derives its name from Parma — an area in Italy that has been producing this cheese for more than 400 years. If you decide to buy the cheese with that label — you’re buying the real thing.

The same goes for San Marzano tomato sauce, Bologna meat and Chianti from Italy — as well as Scotch whisky from Scotland.  And Roquefort cheese and Champagne from France.

Olmsted strongly advises to look for the label PDO — Protected Designation of Origin — the highest guarantee of authenticity there is.

When it comes to red snapper and shrimp, Dr. Mark Stoeckle, a specialist in infectious diseases at Weill Medical College, told Olmsted what he tells consumers.

“Consumers ask me all the time, ‘What can I do?’ and all I can say is, ‘Just don’t ever buy red snapper.’  Red snapper is the big one — when you buy it, you almost never get it.”

What’s more, Olmsted says that shrimp is so bad that he rarely eats it.  Olmsted write, “I won’t buy it, ever, if it is farmed or imported.”

In 2007, the FDA banned five kinds of imported shrimp from China.  But China circumvented the banning by routing the banned shrimp through Indonesia.  They stamped the shrimp as originating from Indonesia, and all of a sudden, it was back in the U.S. food ­supply.

The most trusted logo is “Alaska Seafood: Wild, Natural, Sustainable.” Alaska’s system mandates complete supervision of chain of custody — from catching fish — to placing the product in your grocery store.

For what it’s worth, surprisingly, discount stores like Walmart, BJ’s Wholesale Club, Trader Joe’s, and Costco, are as stringent with their standards as Whole Foods.

No doubt — it takes some time to research where to find real, nutritious food — and distinguish what is fake food — harmful to your health.  But it’s well worth it!

Not only for health reasons, but for the satisfaction of tasting real food — while savoring the flavors — and not looking for something to eat an hour later.

The main objective is to stay healthy and live longer so you can enjoy what life offers.