Sodium, Calories and Fats in Pizza Damaging To Health of American Children 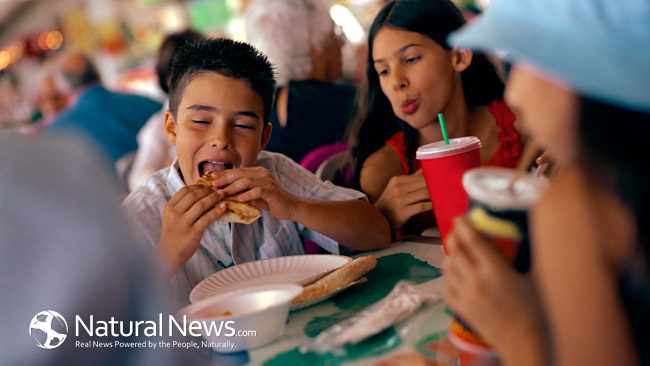 It’s no surprise that pizza, laden with layers of cheese and greasy bowls of pepperoni, is not a healthy food choice.

Sure, it satisfies cravings for carbs and cheese, but according to the Centers for Research in the Public Interest, slices are often drowning in sodium, fat and calories. In fact, they found that compared to Canada’s Pizza Hut, just one large slice of Pizza Hut’s Veggie Lover’s Pan Pizza in the United States has more than 3.5 times as much sodium. In other countries, too, the United States surpassed sodium levels for other types of Pizza Hut pizzas.(1)

Considering that the average person typically indulges in more than one slice, it’s clear that calorie content and high sodium levels aren’t lessening. In fact, the Centers for Disease Control and Prevention (CDC) says that pizza is a top food responsible for sodium in Americans’ diets; over 40 percent of the sodium consumed comes from the ten types of food, pizza being one of them. Soups, cold cuts and cured meats and cheese is also a part of that Top 10 list.(2)

A new study reinforces Americans’ love of pizza, this time honing in children who consume the popular food.

Researchers from the University of Illinois at Chicago have found that when children eat pizza, they’re consuming more calories, sodium and fat on days they don’t. It’s an eye-opening finding considering that the majority of young children eat pizza on a regular basis; about 20 percent of youths are said to ingest the food on any given day. To make matters worse, the experts also found that eating pizza was more likely to occur in between other meals, showing that young people think of the high-fat food as a mere snack.(3)

The study, titled “Energy and Nutrient Intake From Pizza in the United States,” was published in the journal Pediatrics. It appeared online in January 2015 and in the February 2015 print issue. It background and objective is stated as follows:

The adverse dietary effects of pizza consumption found in this study suggest that its consumption should be curbed and its nutrient content improved.(4)

Lisa Powell, associate director of the Health Policy Center at the Institute of Health Research and Policy at the University of Illinois at Chicago says that more attention to unhealthy dietary habits and making improvements in popular foods is important.

“Curbing pizza consumption alone isn’t enough to significantly reduce the adverse dietary effects of pizza,” she says. “It’s a very common and convenient food, so improving the nutritional content of pizza, in addition to reducing the amount of pizza eaten, could help lessen its negative nutritional impact.”(3)

Health Problems From Too Much Sodium in the Diet

Excess sodium in the diet has been linked with detrimental changes in health including high blood pressure, weakened bones and kidney and heart damage.(5)

Weight problems due to consumption of junk foods such as pastries and pizza is a significant health concern. The American Heart Association says that “The prevalence of obesity in children more than tripled from 1971 to 2011.” In addition to health issues, low self-esteem, depression and a bad body image are also likely to develop in overweight children.(6)