How to Choose Cooking Oils that Won’t Damage Your Health 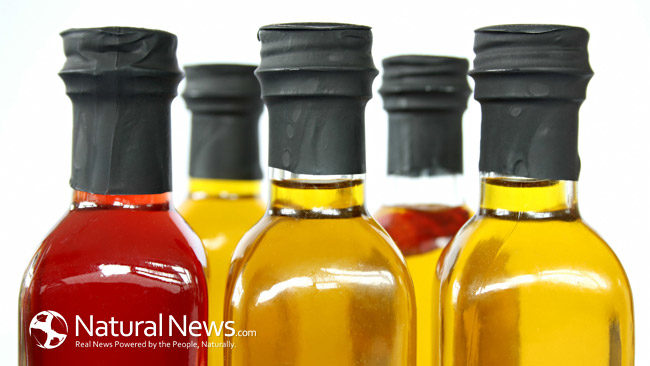 The oil you cook with can have a significant impact on your health over time, due to the way heat affects various oil structures.  The most commonly used oils, vegetables oils, are the most dangerous to use, not only because frying them creates trans-fats, but because high heat oxidizes the oils, destroying any antioxidant content and creating free radicals that prematurely age you and promote disease.  The oxidation results in “cross-linking, cyclization, double-bond shifts, fragmentation, and polymerization of oils that cause far more damage than trans-fat,” according to Dr. Joseph Mercola.

Oils vary in their ability to withstand the damages of heat, so it’s important to have an understanding of which oils are the safest and the most hazardous so you can choose the ones most appropriate for general use and different occasions.

The most stable cooking oils are saturated fats—animal fats and certain non-animal fats, so they should always be used when cooking with high heat.  The most stable cooking oil is coconut oil by far—it has the highest saturated fat content (91.6%) of any animal fat or vegetable oil, and it won’t oxidize at even deep frying temperatures.  If you’re not partial to the taste of coconut, there’s no need to worry—coconut oil tends to lose much of its flavor in cooking.

Coconut oil is followed by palm oil (51.6 % saturated fat) and animal fat (50%) as the safest to use, though the saturated fat in animals can cause other health concerns.

After saturated fat, monounsaturated fat is the second most stable oil under heat, but much less so.  It can oxidize at high temperatures, and so it should only be used on medium-low heat settings or less, especially as the monounsaturated fat content goes down.  The oils with the highest percentage of monounsaturated fat are macadamia nut oil (84%), followed by olive oil (76%), avocado oil (73.8%), almond oil (65%), canola oil (61.6%), and peanut oil (48%).  As an aside though, canola oil is actually one of the worst oils to cook with, because the majority of the crops (called rapeseed) are genetically modified, the oil has a very short shelf-life, and it has a greater tendency to create trans-fats than most any other oil.

The last major category of fat, and the worst to cook with, are polyunsaturated fats.  They’re most sensitive to heat, and are unstable when removed from their source foods, so they create the highest amount of free radicals when heated, even on low setting temperatures.  In order of percentage of polyunsaturated fat, they are the following: safflower oil (78.4%), hemp oil (77.5%), grape seed oil (73.2%), flaxseed (69.1%), sunflower oil (68.7%), soybean oil (62%; majority is GMO), corn oil (57.4%; majority is GMO), and cottonseed oil (54.3%; majority is GMO).

Some of the oils in the polyunsaturated category are healthier when unheated, like flaxseed oil and hemp oil, due to their omega-3 content, but they should be avoided for cooking purposes.