Watermelon: King of the Summer Fruits 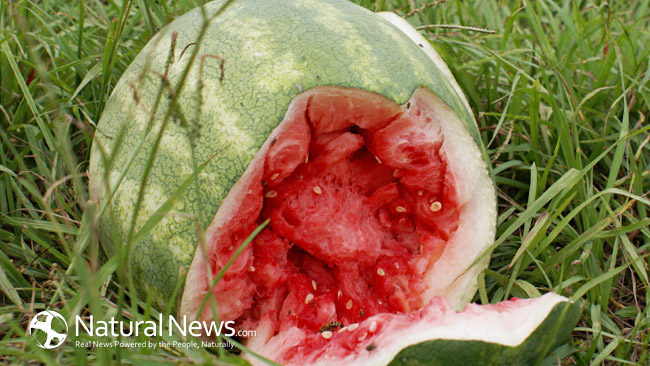 The watermelon is one of the West’s most popular summer fruits. In fact, over four billion pounds of these large, round melons – which originated in Africa – are produced every year in the United States alone.

Since watermelons are comprised of approximately 92 percent water, many people assume that they aren’t as nutritious as heavier, more substantial fruits such as apples, bananas, and pears. While it is true that watermelons do contain fewer essential vitamins and minerals compared to most regular fruits, they happen to be much richer in many important compounds – compounds that are well-known for their considerable health benefits.

Excellent source of lycopene – Of all the compounds found in watermelon, perhaps the most significant is lycopene. This bright red carotene, which was once believed to be exclusive to tomatoes, is well-studied in relation to its cardiovascular benefits. One study published in PLoS One in June 2014, for example, found that lycopene supplements could improve endothelial function in patients suffering from heart disease. Another study, published one year earlier in the European Journal of Cardiovascular Nursing, discovered that a higher intake of dietary lycopene could lower the chances of heart failure. Significantly, the study also found that increased sodium intake could counter the lycopene’s antioxidant benefits, suggesting that lycopene should be obtained from whole foods rather than processed foods.

Rich in citrulline – Another amazing compound found in watermelon is citrulline, an amino acid that converts into arginine. According to research featured in The Journal of Sexual Medicine in October 2013, citrulline supplements can improve erectile function in rats suffering from erectile dysfunction. Arginine, too, supports male fertility and is often promoted as an aphrodisiac for both sexes.

Like lycopene, citrulline and arginine also boost cardiovascular function. For example, a study published in The Journal of Nutrition in 2007 found that arginine could reduce blood sugar, fat, and cholesterol levels in human and animal subjects. Moreover, since citrulline is proven to boost blood circulation, it can also help treat high blood pressure – one of the most common medical conditions in the Western world.

Hydrates the body – Data provided by the Panhandle Health District of Idaho shows that an estimated 75 percent of Americans are chronically dehydrated – a serious state of affairs that has led to widespread fatigue, kidney malfunction, and more. While watermelons should not (and could not) be a substitute for pure drinking water, eating more of these watery fruits can certainly help hydrate our bodies and protect us from the symptoms associated with dehydration.

High in vitamin C – One cup of diced watermelon supplies us with approximately 21 percent of our recommended daily intake of vitamin C. Aside from guarding us from degenerative diseases such as cancer and arthritis, this much-loved antioxidant also aids the production of collagen (the structural foundation of our skin), thus providing anti-aging benefits.

For maximum lycopene and citrulline intake, watermelons are best eaten when ripe and fresh. Try to avoid seedless watermelons if possible; though most of the fruit’s benefits lie in its pulp, watermelon seeds are a surprisingly good source of protein, fat, magnesium, and B vitamins!