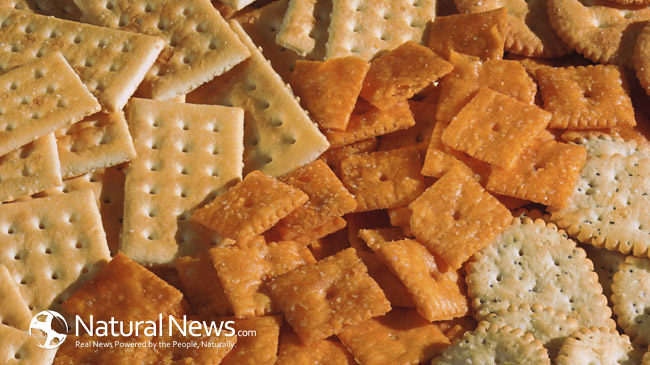 These are just some of the ingredients in Oscar Meyers Ham Lunchables. Because there are 67 of them.

Flour, white flour, wheat flour, plain flour, is the food prepared by grinding and bolting cleaned wheat, other than durum wheat and red durum wheat. To compensate for any natural deficiency of enzymes, malted wheat, malted wheat flour, malted barley flour, or any combination of two or more of these, may be used.

It contains in each pound:

Knowing our nations Agriculture system, these are more thank likely derived from GMOs.

According to the U.S. Department of Agriculture, 1 cup of unbleached, enriched white flour has approximately

In contrast, a cup of whole-grain wheat flour has:

Note the significant differences in fiber and protein contents.

Harmless preparations of α-amylase obtained from Aspergillus oryzae, alone or in a safe and suitable carrier, may be used in addition of the vitamins.

The experience of safe commercial use of A. oryzae is extraordinarily well established. As a “koji” mold it has been used safely in the food industry for several hundred years. Aspergillus oryzae has apparently been an essential part of oriental food production for centuries and is now used in the production of many different oriental foods such as soy sauce, sake and miso.

EPA has reviewed, under TSCA, two genetically modified strains of A. oryzae used for the production of enzymes

On a side note of enriched flour, here are some bleaching agents used for bleached flour:

When it comes to fat, trans fat is considered by some doctors to be the worst type of fat. Unlike other fats, trans fat, also called trans-fatty acids, both raises your “bad” (LDL) cholesterol and lowers your “good” (HDL) cholesterol.

Commercial baked goods, such as crackers, cookies, cakes and many fried foods, such as doughnuts and french fries,  may contain trans fats. Shortenings and some margarines can be high in trans fat.

Civilization survived without partially hydrogenated oils for eons. It was first used commercially about 75 years ago, but its use became far more widespread beginning in the 1950s. Now it is used in many thousands of processed foods.

Scientists aren’t sure exactly why, but the addition of hydrogen to oil increases your cholesterol more than do other types of fats. It’s thought that adding hydrogen to oil makes the oil more difficult to digest, and your body recognizes trans fats as saturated fats.

Sugar/Table Sugar/Sucrose is obtained by crystallization from sugar cane or sugar beet juice that has been extracted by pressing or diffusion, then clarified and evaporated.

Leads to insulin resistance, which is not only an underlying factor of type 2 diabetes and heart disease, but also many cancers.

Tricks your body into gaining weight by fooling your metabolism, as it turns off your body’s appetite-control system. Sucrose does not appropriately stimulate insulin, which in turn does not suppress ghrelin (the “hunger hormone”) and doesn’t stimulate leptin (the “satiety hormone”), which together result in your eating more and developing insulin resistance.

The cells of many human cancers come to depend on insulin to provide the fuel (blood sugar) and materials they need to grow and multiply. Insulin and insulin-like growth factor (and related growth factors) also provide the signal, in effect, to do it.

The more insulin, the better they do.

Many pre-cancerous cells would never acquire the mutations that turn them into malignant tumors if they weren’t being driven by insulin to take up more and more blood sugar and metabolize it.”

It is well established that uncontrolled glucose conc in maternal blood are associated with elevated embryonic and fetal death and increased neonatal morbidity and mortality.

Millions of babies all over the world were eating baby foods containing large amounts of MSG and hydroloyzed vegetable protein (a compound which contains three excitotoxins).

The general population are consuming much more than the current recommendation of sodium for adults, which is 2g sodium/day. Children between ages 1 to 9 are suggested to consume from 1,000mg to 1,500mg of sodium. One Ham Lunchable consists of 580mg of sodium. Depending on age, this meets close to one half to one third of suggested sodium in one day, on top of whatever else you may feed your child that day.

As reliable and trustworthy as they are, according to WHO.

According to U.S. Department of Health and Human Services, no more than 10 percent of your child’s daily calories should come from saturated fat. In a 1,000 – 1,400 calorie diet, varying from ages 1 – 8, that’s 14 or fewer grams of saturated fat. One Lunchable consists of 6g of saturated fat. Just under half of a young childs recomended daily intake. And that is on top of whatever else you may be feeding your child that day.

The American Heart Association recommends the amount of sugar calories you consume should not exceed half of your discretionary calorie intake for the day.

For preschool children eating a 1,200- to 1,400-calorie diet, this translates into about 16.7g of sugar per day. Children ages 4 to 8 should consume less sugar—about 12.5g per day, because they have greater nutritional needs and have fewer discretionary calories in their daily diets

One Ham Lunchable consists of 21g of sugar, which is over the recommended daily intake, on top of any other sugary food you might feed your child that day