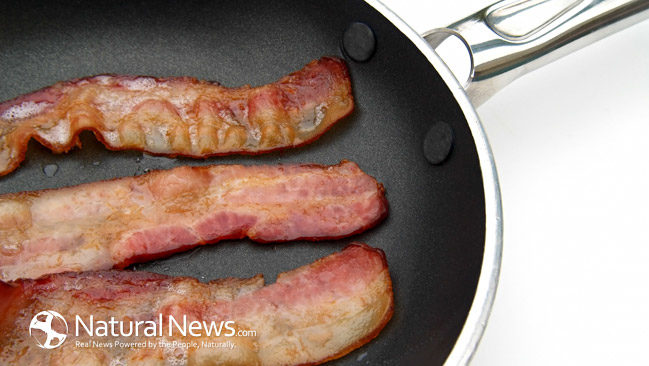 In a new report, the World Health Organization (WHO) has confirmed that bacon, red meat, and processed meats are carcinogenic to varying degrees and urges consumers to cut back. WHO officials stated that consuming just 50 grams of processed pork per day – the equivalent of two slices of bacon or less than one piece of sausage – increases risk for colorectal cancer by nearly 20 percent. The WHO also cited limited evidence that consuming 100g of red meat per day increases risk of cancer by 17%.

These findings place consumption of highly processed bacon, hotdogs, salami, and sausages in the same carcinogen classification rank as arsenic, cigarettes, plutonium, and asbestos. Their findings also classify other forms of red meats such as beef, lamb, and pork in the level 2A classification, meaning that they “probably cause cancer.”

For example, one substance may be classified in group one because it aggressively increases risk for a particular cancer (i.e., consumption of bacon) and another substance in that same group may increase risk for multiple kinds of cancers (i.e., cigarette smoking). While bacon has been placed in the same carcinogen classification as cigarettes and other hardcore carcinogens, the organization is not suggesting that they present the exact same risks. But make no mistake, based on their findings highly processed pork products deserve to be in the category one classification.

Reporters have already started speculating on how this news will effect fast food and factory farming industries, which profit billions of dollars from processed pork and red meats each year. The WHO is expected to receive backlash for being one of the first major mainstream health organizations to confirm what several groups have been reporting for years. Sophie Borland Health Correspondent for the Daily Mail said, “Any advice to cut, or avoid, processed meat will be welcomed by cancer charities. But it could have huge repercussions for the meat industry, which will be mindful that sugar sales fell last year after the WHO issued a warning on overconsumption.”

Kudos to WHO for giving publishing this vital information on a massive scale. This is not their first time releasing lifesaving information against industry preferences. The meat industry is already hard at work to dispel these facts and keep their billion dollar industries thriving. “The $95 billion U.S. beef industry has been preparing for months to mount a response, and some scientists, including some unaffiliated with the meat industry, have questioned whether the evidence is substantial enough to draw the strong conclusions that the WHO panel did,” said Peter Whoriskey of the Washington Post. Let the meat wars begin.