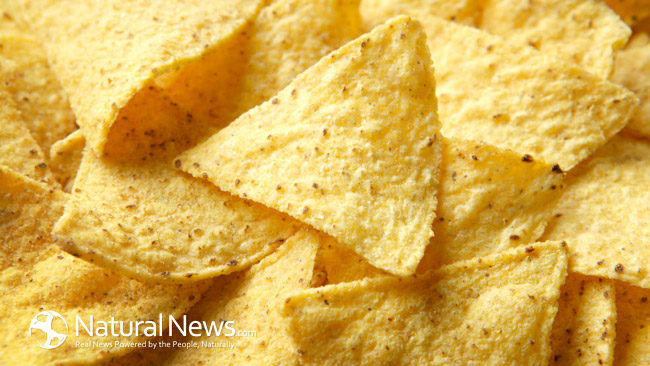 This snack food made from corn tortillas is a favorite crunch for many to consume, especially during football season. These wedges are pretty basic…. corn, vegetable oil, salt, and water, fried or baked. Yellow corn is the popular staple, but they can also be made from white, blue, or red corn. Originally considered only a Hispanic style food, this chip is a main attraction for any party, dip, or occasion. Today, tortilla chips sell at a much higher rate than regular potato chips. In fact, tortillas now out sell hamburger and hot dog buns. Mexican food has practically become as American as apple pie.

In the 1900s, tortilla chips were being sold to Mexican restaurants in southern California. What was once just left-over tortilla dough, became a whole line of distribution. Frito-Lay saw dollar signs written all over this and created the “Dorito”. In Spanish, “dorito” means “little golden things”. The Dorito was the original tortilla chip (hidden under that orange cheese color), to hit shelves in the United States. Then the concept of salsa and guacamole were introduced. Low and behold when the nacho was “invented”, this plate of tortilla chips and cheese, took these wedges to the next level. So think about this…. Frito-Lay owns Fritos, Ruffles, and Lays, and basically the tortilla chip.

The actual history of who invented these chips is debatable. Some say it was Rebecca Webb Carranza, others say it was the Martinez family of the Tamalina Milling Company.

The problem is self-control when it comes to these taste-bud pleasers. Most can say they have eaten so many in one serving they pile up in their teeth or their mouth starts to sting from the salt. A single serving size of these is supposed to be 9 chips. Yes, 9. That is about 150 calories and 20 carbohydrate and about 110 grams of sodium. Tortilla chips pretty much define what empty calories are. There isn’t exactly a nutritional benefit to their consumption. Then we dip each chip in sodium filled salsa and pile on the guacamole (understanding that ¼ of an avocado is one serving), the fat and calories continue.

Football season fans just wouldn’t know what to do without a chip and beverage in hand. Mindless eating and social eating for sure. And well, you can never go wrong with tortilla chips. Have you ever had a bad tortilla chip?? Maybe stale, but most of us polish off the bag before that ever happens. Turning down tortilla chips might a sin but try to reach for the veggie platter instead. Your body will thank you. If you have the will power to just stick to 9 chips, well all the more power to you.