A third of American children eat fast food daily, but wait, there is hope 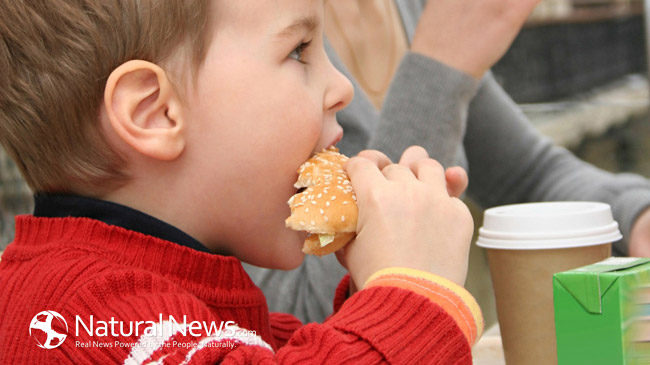 A third of children and adolescents in the United States report eating fast food on any given day, reports a new study by the National Center for Health Statistics. (1)

Fast food is defined as food that can be prepared quickly and easily and is sold for a quick meal outside of the home. Fast food isn’t purchased solely at fast-food restaurants, but also at conventional restaurants (1), convenience stores, supermarkets, and groceries.(2)

What the study found

In 2011-2012, 34.3% of children and adolescents aged 2-19 reported eating fast food on any given day, with an estimated 12% of them getting more than 40% of their daily calories from fast food. There was no significant difference in these rates between boys and girls; there was also no significant difference between children living at just above the poverty level versus more than three times the poverty level.

#1 Fast food is often cited as a source of increasing obesity rates in America, but while this study found higher rates of obesity in the children who ate the most fast food, the difference was not significant (1). Even if fast food is not the leading cause of obesity, there are still many reasons it’s detrimental to health.

#3 Fast food impoverishes healthy gut bacteria. A South African study in 2014 found that rural Africans who switched to a high-fat low-fiber Western diet from their traditional diet, their gut microbiomes produced about half the levels of an inflammation-reducing molecule, butyrate; correspondingly, the microbiomes of Americans doubled their production of this healthful molecule when they switched to a healthier traditional South African diet. (4)

#4 Fast food consumption has been linked to lower test scores in eighth graders in the United States. While the reason wasn’t pinpointed, it was noted that diets high in fat and sugar impede immediate memory and learning processes, and nutrients like iron that help cognitive development are lacking in fast food. (5)

#5 Fast food typically contains high levels of additives, which can damage the operation of the intestines and lead to allergies and autoimmune troubles. (6)

#5 Fast food consumption has even been linked to impatience and inability to delay short-term gain for long-term strategy. (7)

But there’s also some hopeful news

Another study found that even while rates of fast food consumption were on the rise, the percentage of calories from fast food fell.(8) The rates of total calories consumed fell by about 205 calories a day, about half of which was because of decreases in calories from fast food. There are a couple potential reasons for this change: fast food menus are offering more fruits, vegetables, and lower-calorie options; and kids are eating less food when they eat out.(8)(9)

One can only hope that healthy foods and fresh fruits and vegetables will become more and more available from fast, affordable, accessible sources.