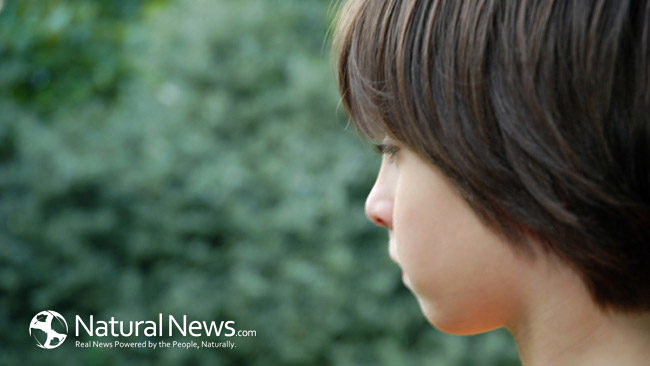 Recently a few people asked me how I would explain the emotional cause of autism when it appears after an immunization shot. I am not an expert in autism and this article is not aimed at covering all aspects of this disease, but I would like to share with you some views to explore through a Biodecoding® and naturopathic approach.

The first observation to be made is that not all children develop autism after receiving a vaccine, and only a very small percentage of them are reported. Another observation to be made by studying official charts is that autism has increased significantly over the past 20 years at almost the same pace as the number of mandatory vaccines imposed on younger children.

The question we can ask ourselves is, “is autism caused by vaccines, toxic substances, genetic predispositions or by emotional traumas?” Let’s explore those interplays through new angles.

Autistic means “who wants to be by himself.” Since there is not just one type of autism, the medical community calls it Autism Spectrum Disorder. It refers to a range of conditions characterized by challenges with social skills, repetitive behaviors, speech and nonverbal communication.  Autism’s most-obvious signs tend to appear between two and three years of age. In some cases, it can be diagnosed as early as 18 months.

Depending on the magnitude of the condition, autism tendency can range from total psychotic withdrawal to “normal” shyness. The medical label for mild autism is Social Anxiety Disorder in which people are usually more sensitive to noise, motion, disorganization and instability.

There are also very productive people showing workaholic behaviors, like Steve Jobs, the co-founder of Apple, to name one of the famous autistic celebrities. Many manifest special skills and talents like Susan Boyle and Mozart.  Some autistic people also display aggressive behaviors towards others and/or themselves as seen in the movie Rain Man, in the character played by Dustin Hoffman. In general, people with autistic dispositions prefer solitude and like to be in their own world, happier by themselves.

As we can see, a great number of the population can fit into this description, which means that many of us have an autistic terrain, although not all of us are diagnosed as such. A pathological label is only given if the symptoms are obvious, out of the ordinary, and significantly affect the person in her/his normal everyday life.

If the emotional distress is low, the person might develop shyness and be slightly introverted. On the other hand, if the person experiences a high level of distress at the time of the emotional shock, she can develop intense psychotic behaviors.

Here is an example of two emotional conflicts that support an autistic tendency: a “fear of the external world” and a “non-acceptance of the external world.” Depending on the person’s gender and whether s/he is right-handed or left-handed, the two emotional feelings underlying an autistic constellation vary. When the two conflicts are active (meaning not resolved), the only solution is to withdraw from the world and remain alone.

Here is a scenario that could trigger autism in a child: while in utero, the mother is attacked in the street by a man with a knife. She is scared to death, and the fetus perceives his mother’s distress and emotion. The fetus will receive his first shock through his mother’s experience. Later on, after he is born, the child gets very sick and receives drastic treatments at the hospital where tubes are forced into his mouth. His perception of the situation can be “I cannot accept what is done to me”; the outside world is then perceived as hostile and dangerous and his solution will be to withdraw.

Usually a child is not aware of his conflicts and emotions and is unable to express them and resolve his traumas. So, the two conflicts may remain active, and at the time of the second shock (at the hospital in this example), an autistic constellation is set up predisposing him for some type of autistic tendency.

If the magnitude of the emotional distress is mild, he might never develop “abnormal” behaviors and may live all his life without any diagnosis of autism. If the magnitude of his emotions is intense, noticeable behavioral challenges may manifest and doctors may diagnose some kind of autistic condition.

As we can see, we may carry the two conflicts in us but never be diagnosed as autistic because the signs are not significant.

As seen in the example above, our emotional shocks may occur any time from conception throughout childhood. That’s a common scenario in autism.

But the parents can also transmit emotional conflicts that occurred during their lifetime long before the child was conceived. One of the parents (sometimes both of them) may have experienced a scare-fright conflict that was never resolved.  As psycho-biogenealogy has demonstrated, those memories of traumas are passed on to the child at the time of conception and therefore the child will carry a trauma that does not belong to him but would have to be dealt with it throughout his life.

That is how we explain the genetic predispositions of autism, the transmission of past traumas from the parents to the child. In the case of autism, the child comes to this world with at least one trauma specific to an autistic constellation and which belongs to one or both parents (scare-fright conflict for example). He then just needs to experience a second emotional shock during his early childhood that triggers the emotional feeling specific to the autistic constellation for the behavior to manifest.

For example: As a young child, a dad experienced a situation that he perceived as “unacceptable, indigestible.” He witnessed his dad beating his mother and never resolved this issue. Later on, he got married and conceived a child. His emotional conflict “this is unacceptable” is unconsciously transmitted to his child. The child is born with a first conflict predisposing for an autistic constellation.

At two years of age, the child is sent to nursery school. The child experiences this noisy environment as threatening and insecure. He gets a second conflict that would start an autistic condition. Depending on the intensity of the traumas, he may show signs of shyness and withdrawal or he may develop significant signs of developmental challenges.

The statement that parents from families with autistic children have higher risks at having autistic children is based on the hypothesis that unresolved traumas from parents and ancestors are passed on to the next generation.

Now let’s explore the autism-vaccine connection. As mentioned in the previous section, a child initially can carry a first conflict that belongs to his parents. He then just needs to experience a second conflict during his early childhood to develop an autistic behavior. This second trauma may occur at the time of vaccination. Indeed, for some children the immunization experience can be perceived as traumatic. The child can experience a scare-fright feeling, can feel threaten in his space of security or feel that what is done to him is unacceptable. All those emotional feelings are common triggers for autism.

Another case scenario is that the child does not carry any conflict specific to autism from his parents but experiences two conflicts simultaneously at the time of immunization: for instance, a scare-fright conflict and an identity conflict. The foundation for autism is set up at this precise moment and within a few days or few weeks some behavioral symptoms may show up.

AUTISM AND THE LEVEL OF TOXICITY IN THE BODY

The last point that needs to be discussed is the level of toxicity in the body. Through empirical observations, we notice that people with low level of toxicity in their bodies tend to have fewer diseases than people who eat processed foods loaded with additives, take drugs and medications, smoke, use chemicals on a regular basis, etc.

As mentioned earlier, we may carry memories of emotional conflicts in our cells, but because the magnitude of the emotional traumas was small, we do not manifest any symptoms. The disease program remains dormant.

But an increase of toxicity in the body is a factor that can awaken some dormant programs and cause a disease to manifest. As most of us agree, vaccines are loaded with highly toxic substances that are directly injected in the blood and tissues, by-passing the natural protective barriers put in place by the body at the skin and digestive levels. This sudden intrusion of toxic substances in the body rapidly increases the level of toxicity in the tissues, creating a shock and therefore awakening dormant disease programs (in this case, autism) that were silent before.

I have witnessed a complete recovery of a nine-year-old severely autistic child through a naturopathic detox program. The mother came to consult for repetitive ear infections in her child.  Less than a year later the child was free of ear infections and his cognitive functions surprisingly improved to the point that he got admitted in a normal school. Within a few years he caught up with all his grades. He later became a CPA, got married and had two children. I don’t know if during the detox process one or both conflicts were unconsciously resolved. They may have stayed in place, but certainly the detoxifying process helped to lower the body’s toxicity to a point that the autistic tendency was no longer exacerbated by the toxins.

Thanks to the work of numerous alternative practitioners and researchers, we now know that autism can be reversed, especially when it is addressed at an early age. As always, combining different therapies that will work at different levels will give better chances of success. Working on the physiological level with a detox program and on the emotional level by resolving past traumas seem to show the most results.

Marie A. Boularand
Marie A. Boularand is a certified Naturopath, Biodecoding® Practitioner and Psycho-bio Therapist. Founder of the Biodecoding® Institute, she has been practicing, teaching and writing about Natural Health, Self-healing, Personal Transformation and Human Consciousness for the past 20 years in France and the USA. Her main focus is on educating and empowering people to help them regain their health sovereignty, get out of the fear of disease, acknowledge and trust their self-healing abilities. Using common sense and searching for the root cause, her method approaches the human being at all levels of consciousness. For more information visit her website www.HEALBEYOND.com