The Amazing Health Benefits of Tomatoes 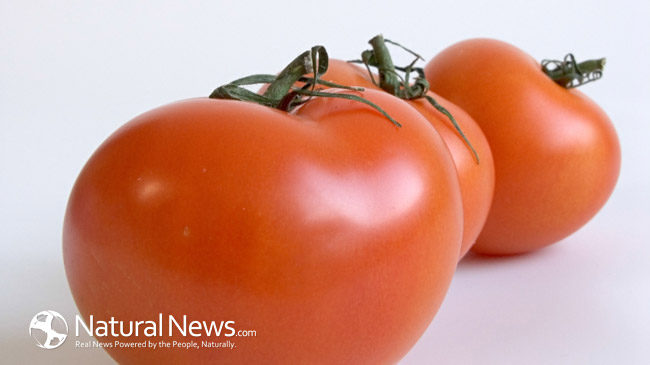 They’re the most widely grown vegetable in the world (1) and the fourth most commonly eaten fresh vegetable in America (2). They’re consumed raw, cooked, as juice, as sauce, as soup, and as one of the world’s most popular condiments. Tomatoes are not only delicious – they also provide a wide array of health benefits thanks to their rich antioxidant and vitamin content.

Raw tomatoes are an excellent source of phytochemicals such as carotenoids and polyphenols (2). A major carotenoid found in tomatoes is lycopene, a powerful antioxidant that has been shown to reduce the risk of prostate cancer.

The Physicians’ Health Study found that men with prostate cancer had significantly lower levels of lycopene in their plasma samples, especially in aggressive cases and for those who were not taking a beta-carotene supplement (2). In the Health Professionals Follow-Up Study, it was discovered that consuming at least two servings of tomato products per week decreased prostate cancer risk (2).

High plasma lycopene levels have been linked to lower risk of cardiovascular disease (CVD) as well. According to the Kuopio Ischemic Heart Disease Risk Factor Study, men who underwent a coronary event had lower levels of plasma lycopene than those who did not (2). Likewise, the European Multicenter Case-Control Study on Antioxidants, Myocardial Infarction and Breast Cancer Study found that lycopene protects against CVD (2).

Lycopene in tomatoes have also been found to reduce the risk of stroke. A Finnish study that followed more than a thousand middle-aged men for 12 years discovered that those with the highest levels of lycopene in their blood had a 55 percent lower chance of having any kind of stroke and a 59 percent lower chance of having a stroke due to blood clots (3). It was suggested that this is due to lycopene’s ability to fight free radicals, boost the immune system, reduce inflammation and cholesterol levels, and prevent blood clots (3).

Dr. Edward Giovannucci of the Harvard School of Public Health recommends a daily lycopene intake of 10,000 micrograms or more from food and not from supplements. “You may be getting the wrong form of lycopene in a supplement. There are also a lot of compounds in food that aren’t lycopene but that are similar, and some of those molecules may be part of what makes lycopene so beneficial (3),” he says.

Aside from lycopene, tomatoes are a great source of folic acid, potassium, and vitamins A, C, and E (2).