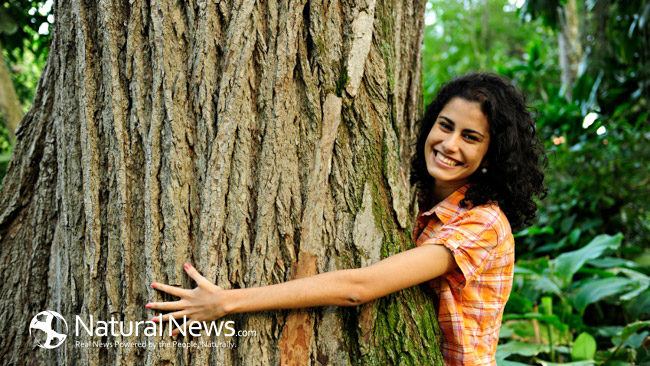 (NaturalNews) Thank goodness carbon dioxide levels are finally rising ever so slightly in our atmosphere, bringing much-needed carbon dioxide to the plants and forests of the world which have been starving for CO2. The lack of CO2 in the atmosphere is one of the most devastating limiting factors for plant growth and reforestation of the planet, and at just 400ppm — that’s just 400 micrograms per kilogram — carbon dioxide is so low that Earth’s plant life can barely breathe.

Editor’s note: I have added substantially to this story since it was first published in order to attempt to educate what appear to be a mass of brainwashed, mathematically illiterate commenters on Facebook who demonstrate a wholesale inability to process information with anything resembling rationality on this subject.

Let me clarify three things before we even get into the story:

#1 – NO, I do not support the coal and oil industry, and in fact I think they are terrible polluters of our planet for lots of reasons that have nothing to do with CO2. As it turns out, all the coal and oil being burned across our world right now only slightly impacts CO2 levels, especially when compared with CO2 emissions by ocean life. So my support of CO2 as an essential plant nutrient in no way is any kind of endorsement of the oil and coal industries. My long track record of activism against corporate monopolists is irrefutably solid.

#2 – YES, CO2 is an essential plant nutrient. Despite all the idiotic beliefs of people who have been brainwashed by Al Gore into believing scientific mythologies, higher CO2 levels support faster plant growth and the re-greening of our planet, period! Anyone who disagrees with this is flatly uninformed, brainwashed or just plain ignorant of plant biology (and that’s a lot of people). Recent science is proving that rising CO2 levels are, in fact, expanding plant growth and reforestation around the world. Read Increase in Carbon Dioxide Levels “Greening” the Deserts at NatureWorldNews.com or read the press release from the original researchers out of Australia who documented this correlation. And everybody needs to read www.PlantsNeedCO2.org

#3 – The current level of CO2 in Earth’s atmosphere is 400ppm. By comparison, Oxygen exists in the atmosphere at 210,000ppm. When you exhale, your own breath contains 40,000ppm of CO2, and if you know anything about emergency first aid, then you know that breathing this 40,000ppm of CO2 into another person’s body (mouth-to-mouth resuscitation) is a lifesaving action. It’s not uncommon for CO2 to reach levels of 3000ppm in homes, schools and offices. OSHA allows workers to work in environments with up to 5000ppm of CO2. (Because, again, oxygen is present at 210,000ppm, vastly out-weighing the CO2.)

So all this talk of carbon dioxide threatening the entire planet at just 400ppm — less than one-half of 1/1000th of the air — is pure nonsense. Total quack science fearmongering.

In fact, most of what we’ve all been told about CO2 over the pat few years is a complete lie. It’s time to stop believing these lies and wake up to reality. Most importantly, stop defending the CO2 / global warming hoax. Yes, CO2 is rising, but it’s mostly from non-human activity, and rising levels actually support forests and plants everywhere.

How did I “wake up” to this information? It’s simple: I used to be a believer in the CO2 hoax until I really began to study plant physiology and aquaponics production. Only then did I discover that CO2 is a vital nutrient for plant growth and that levels of CO2 in the atmosphere were radically deficient for optimal reforestation and plant biology. My awakening to this in no way means I endorse coal or oil industries, both of which are dirty polluters of the planet. But I am no longer allowing myself to be conned by the likes of Al Gore who has successfully convinced far too many people that their own breath is a global pollutant that needs to be regulated and taxed.

The CO2 scam is nothing more than a global tax moneymaking scheme being pushed by people who hope to get rich off our collective guilt for a problem that’s entirely fabricated and fictional.

Throughout the history of our planet, atmospheric CO2 was much, much higher, and it supported eras of lush rainforests, rapid plant growth and far greater biodiversity than what we see today. In fact, 525 million years ago, Earth’s atmospheric CO2 levels were as high at 7,000 ppm — and far from the planet “dying” as global warming hoax pushers try to claim, it was one of the most lush and biodiverse times in our planet’s history.

As the following chart clearly shows, CO2 levels are at one of their lowest levels in the history of our planet: Carbon dioxide is greening the planet

Global warming alarmists and hoaxers, of course, have warned that CO2 levels crossing the threshold of 400ppm will spell certain doom for the human race. What they don’t mention is that rising CO2 levels actually set off a “global greening,” complete with forests re-growing at an accelerated rate, gardens producing more food and arid regions seeing a restoration of green plants.

In fact, a study just published in Geophysical Research Letters has documented that a 14% increase in CO2 levels in the atmosphere gave rise to a 5% – 10% increase in green foliage, with a total increase in plant “cover” of 11%. That study is entitled, CO2 fertilisation has increased maximum foliage cover across the globe’s warm, arid environments.

That study refers to CO2 as a “fertilizer” that causes a “fertilization effect.” As the study authors explain:

Our results confirm that the anticipated CO2 fertilization effect is occurring alongside ongoing anthropogenic perturbations to the carbon cycle and that the fertilisation effect is now a significant land surface process.

By the way, your body is 18% carbon and 65% oxygen. (I’m going to pre-empt some stupid Facebook trolls who will say, “Not true! Your body is 75% water!” by answering in advance that H2O is made of hydrogen and oxygen. Hydrogen has such a low atomic weight, however, that it doesn’t contribute more than about 10% to your total body mass. Then again, trying to teach science to Facebook trolls is a lot like trying to teach pigs to write javascript.)

In total, you are 83% made of the same stuff as CO2, just in a different molecular arrangement. CO2 is, of course, constantly reformed and recycled throughout the planetary ecosystem. Ocean biological activity alone produces 90 billion tons of CO2 each year — many multiples of the far smaller amount produced by human activity (about 6 billion tons). If CO2 alone caused global warming and global death, we’d all be dead by now. It turns out that CO2 actually helps fertilize the growth and restoration of plants and forests!

By the way, it’s not just land plants that are starving for CO2. Marine plants also need more CO2, and most marine biology came into being in a time when CO2 levels were far higher than they are today.

The higher CO2 levels are in the atmosphere, the more CO2 gets absorbed into ocean water, making it available to help marine plants thrive. This CO2, importantly, is also used to build coral reefs.

Wait a second! Haven’t we all been told that CO2 is destroying coral reefs? I used to think so, too, because I hadn’t scrutinized the science closely enough. But if you really dig into this issue, it turns out that coral reefs are largely being destroyed by toxic chemical runoff from human activity, not from CO2.

If you love plants and forests and gardens, you gotta love CO2

The bottom line in all this is that if you love plant life on planet Earth, you’ve gotta love carbon dioxide. CO2 is the key nutrient that’s needed to bolster the rapid growth of nearly all plants, and right now Earth’s atmosphere is in a state of carbon dioxide deficiency.

Rising CO2 levels are a huge benefit to plant life across the planet. Hare-brained plans to “sequester” CO2 will cause an artificial reduction in this crucial plant nutrient, resulting in the mass global die-off of plants and the thinning of forests. Carbon sequestration is, quite literally, plant starvation and an attack against Mother Nature.

So don’t buy into the disinfo hawked by CO2 alarmists like Al Gore. They are pushing an utterly fictional story about how “CO2 will destroy the world” and end human civilization if we don’t stop its rise. I welcome rising CO2 levels and being scientifically trained, I know that carbon dioxide only exists at less than 1/1000th of the atmosphere. In fact, it’s currently at less than half of 1/1000th of the atmosphere. That’s an extremely small amount of CO2 — just 400ppm. And it’s just barely enough to keep Earth’s plants from dying en masse.

• CO2 is an essential plant nutrient that accelerates the growth of plants, gardens and forests.

• Higher CO2 levels means better reforestation and “greening” of the planet. As CO2 levels rise, barren regions are able to “re-green” with trees that couldn’t grow there before.

• CO2 is chronically deficient in the atmosphere today; many plants are “starving” for carbon dioxide.

• NO, I do not support the oil and gas industries. In fact, there is hardly any link between energy usage and the rise of CO2 in the atmosphere. The vast majority of CO2 emissions come from biology, not burning fossil fuels.