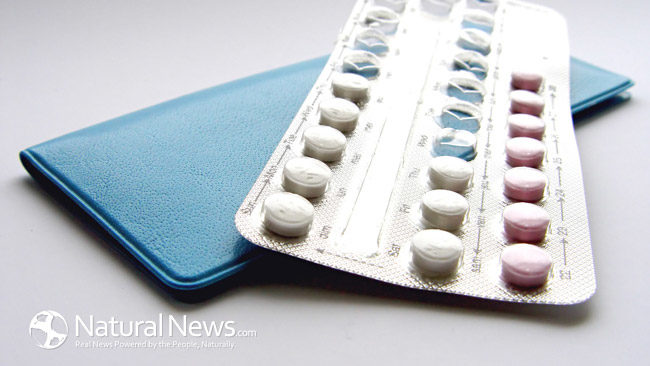 When I was 16 years old, I went on birth control. Not because I was sexually active, but because my periods were irregular and painful. Of course, the first thing my doctor suggested to me, was to go on birth control, and everything would soon regulate. Fast-forward seven years later, once I decided to go off birth control, I realized how incredibly confused I made my hormones (and body).

The first round of birth control, Ortho Tri-Cyclen Lo, made my face burst out into a horrid rash, and my skin splotchy (weird white spots that took a year to go away). After a month of those pills, I was switched to a regular Ortho Tri-Cyclen, which my body better adapted to, for a full seven years.

During some of the most crucial years of a woman’s natural hormone cycle fluctuations, I, like many other girls, was being pumped with synthetic hormones completely un-fit for my body’s needs.

When I first went off the pill, it took 8 months to get my first period. Now that been off the pill for 2 years, my hormones are STILL regulating themselves to get back on track. Not to mention, my hair growth has slowed dramatically (hair growth has A LOT to do with hormone production), and my face is still figuring itself out (I get blemishes in areas influenced by hormone production). Essentially, it just isn’t worth it.

I am thankful for my diet (4 years raw vegan), which has helped immensely with getting my hormones back on track (faster healing time), as well as yoga and dance, which help me centre myself and feel grounded. I have also come to learn my body’s natural cycles, so I now know when I am ovulating, and when I can expect to have a period (who knew that our bodies actually give us physical signs of ovulation, and when we should, and shouldn’t have sex, based on whether or not we want a child?!).

Here are 5 reasons why you should stop taking birth control TODAY!

A new study led by Fred Hutchinson Cancer Research Centre scientists recently found that those using birth control pills could face a 50% or higher increased risk of breast cancer than those not using oral contraceptives.

In addition, previous studies have found links between women taking oral contraceptives and an increased risk of developing breast cancer. I don’t know about you, but I rather not take the chance.

2. You lose your natural ability to read your body.

With birth control pills comes the inability of young women to properly read the signs their bodies are giving them. When I went off the pill, and when my body started to regulate again, I discovered the signs that let me knew when I was ovulating (a crucial thing all women should know, in order to plan or avoid any chance of pregnancy).

I also have come to recognize emotional patterns during different times of the month. During ovulation I become much more excited and feel more attractive, opposed to times just before my period where I feel incredibly inward and peaceful. On the pill, these emotions are almost non-existent, and there is almost a constant sense of confusion or what I like to call, a zombie-like state of mind (completely zoned out).

3. You choose the wrong partners.

I remember one of my psychology professors explaining in my honours class that when on the pill, your sense for picking up the right pheromones in a potential mate is completely off kilter. Major histocompatibility complex (MHC) genes are disguised in a man’s smell, which determines things like how well their immune system is functioning. Females quite literally prefer the scent of men whose MHC genes differ from their own. This likely evolved because it would naturally result in stronger, healthier children (children with MHC profiles that contain a greater mix from either parent will have stronger immune systems).

Many studies have shown that women on the pill prefer men who share similar MHC genes, and when they go off the pill, these men are no longer attractive to them, and they again prefer men with dissimilar MHC genes (as we can see, this can be problematic for women and men who get in relationships while the woman is on the pill, get married, and when they want kids, the woman goes off the pill, and suddenly, she is no longer interested in him – aka. why divorce rates have gone through the roof over the last century).

4. Your libido is reduced.

Just that – take it for what it is, and trust me when I say sex drive goes way, way down.

The pill has a serious impact on your gut flora, and increases your chances of developing Candida. Because of this, your immune system is compromised and your ability to absorb nutrients from food is significantly lowered. Once off the pill, consuming foods that will help nourish your digestive tract is crucial.

Carly Fraser is the owner and founder of Live Love Fruit and holds her BSc. Honours degree in Neuroscience. She currently lives in Winnipeg, Manitoba, with a determined life mission to help inspire and motivate individuals to critically think about what they put in their bodies and to find balance through nutrition and lifestyle. Live Love Fruit has helped hundreds of thousands of individuals to re-connect with their bodies and learn self-love through proper eating habits, natural living and abundant “exer-fun” as Carly likes to call it. Her passions include reading, researching, writing, absorbing herself in anything nature-related, gardening, and practicing yoga and dance.