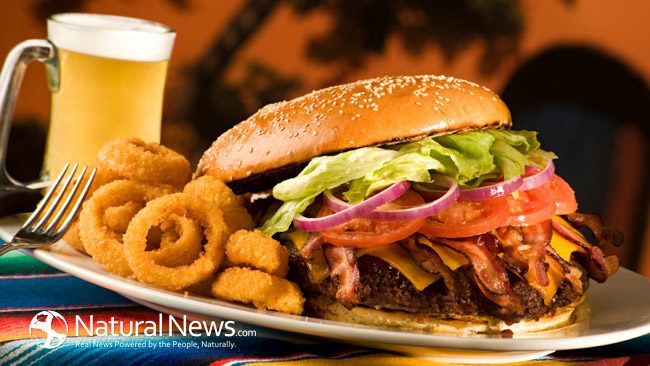 Most people nowadays have heard about the dangers of processed and “fast” foods, including the risks for obesity, heart disease and diabetes. However, even among the world of processed foods, there are some dishes that are so high in fat and calories that they should be specifically avoided. Below are ten examples of these incredibly unhealthy foods.

Burgers
In this category, the Guacamole Bacon Burger wins out, with a total of 1,819 calories and 91g of saturated and trans fat. It also includes a whopping 3,451 mg of sodium. Because of their nutritional content, foods like this have a great potential to clog arteries, raise blood pressure and increase risk for cardiac damage.

Pizzas
The Grill Classic Pizza, with 2,311 calories, 166g of fat and 4,921 mg of sodium won this category easily. The problem is the thick, deep dish crust which add extra carbohydrates and allows for enormous amounts of fatty cheeses and oily toppings that give more than a whole day’s worth of saturated fat.

Foreign Dishes
The calorie and sodium-packed dish of Beef with Rice and Tortillas, Beans and Condiments is one of the worst foreign dishes to consume, coming in at 2,230 calories, 91mg of fat and an over-the-top 6,391mg of sodium. That last number is the equivalent of 195 saltine crackers!

Sandwiches
The Large Tuna Melt, with 1,716 calories, 134mg of fat and 2,121mg of sodium took first place in the sandwich category. While tuna is normally a healthy food, the massive amounts of mayonnaise mixed in with it ruins its nutritional value.

Frozen Meals
The undisputed winner in this competitive category was the White Meat Chicken Pot Pie, with 1,161 calories, 65mg of fat and 1,178mg of sodium. While pot pies are not generally healthy to begin with, this one is made far worse by its large size.

Breakfast Foods
Arby’s Sausage Gravy Biscuit, with 1,041 calories, 61g of fat and 4,700mg of sodium, is probably one of the worst ways to start the day. It is particularly bad because this massive amount of sodium comes with no corresponding potassium to offset it.

Kid’s Lunch
The Turkey and Cheddar Cracker, with 681 calories, 20 g of fat and 1,441 mg of sodium easily took this category. It is made worse by the fact that this meal combo also includes dessert and a highly sugared drink.

Desserts
It would be hard to compete with Caramel Banana Pecan Hotcakes, coming in at 1,542 calories, 78mg of fat and 2,260 mg of sodium. While hotcakes in general are not healthy, these are made worse by containing the sugar equivalent of 8 Twinkies.

Canned Fruits
Peaches themselves, being fruit, should be a healthy dish. However, when the food industry packs and cans them in a sugar-heavy, high-calorie syrup, this nutritional value is greatly diminished and the final product is full of empty and unnecessary calories.

Beverages
The winner for this category was the Chocolate Oreo Shake, with 2,600 calories, 135mg of fat and 1,700mg of sodium. To make those appalling numbers even worse, the shake is packed with a frightening 263g of sugar. There is nothing even remotely healthy about this beverage.

The fact is that better versions of many of the dishes mentioned above can be made at home with healthy ingredients. This can lower the costs of food bills and also ensure that people are eating healthy without have to eliminate good-tasting food.