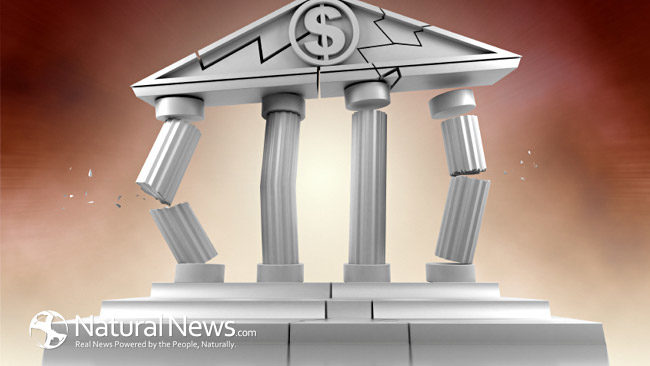 While the mainstream media is distracted by Greece and the European politicking, the real and present weakness of the U.S economy is being largely ignored. What coverage there is, minimilizes and avoids the harsh reality which exists for many Americans. Most financial pundits simply pretend this is a temporary blip on the economic radar and soon things will return to normal through a miracle of sorts. Any potential dissent is minimized to the margins and the status quo can be maintained.

Throughout the alternative media everyone seems to be predicting some kind of economic calamity or collapse, yet if we look closely, the collapse is already under way. Every time the mainstream media comment about the economy it is tinged with excuses for the poor performance of the economy and lousy economic indicators. The weather is to blame, as it is either too hot, too cold, too much snow, or the dollar is to blame. My favourite is, the seasonal fluctuations is the way the data is calculated is depressing the growth forecast. It is all a charade being offered up to provide the illusion everything is under control and not as bad as it seems. Like the citizens of Pompeii who ignored the rumblings of Mount Vesuvius back in 79AD, our current economic woes are, and will, increasingly be felt by the broader more mainstream community as the wheels start to rattle ever more furiously.

The Gradual Decline of U.S Standards of Living

“At this juncture, however, the impact on the broader economy and financial markets of the problems in the subprime market seems likely to be contained. In particular, mortgages to prime borrowers and fixed-rate mortgages to all classes of borrowers continue to perform well, with low rates of delinquency.” Ben Bernanke (March 28, 2007)

Just like the gradual deregulation of the financial services and banking sectors throughout the 80’s, 90’s and 2000’s which eventually led to the GFC, the creeping normalcy and lowering of expectations is currently eroding the national and global psyche. Creeping normalcy is a term which is used to describe how gradual changes can be accepted as the normal situation if these changes happen slowly, or incrementally. The Romans had become accustomed to minor earth tremors in the region and failed to see any imminent danger. By the time the volcano erupted it was too late to take any emergency measures. Jared Diamond made the term creeping normalcy popular in his Pulitzer prize winning book, Collapse – How Societies Choose to Fail or Succeed. The gradual and incremental changes are difficult to see, thus normalcy is difficult to recognise over short periods. It may take a few decades of a long sequence of such slight year-to-year changes before people realise, that conditions used to be much better previously. What is accepted as normal now is a result of gradual changes, or creeping downwards.(1)

The U.S has invented a New Way of Calculating GDP

“We’re certainly in the midst of a once-in-a-lifetime set of economic conditions. The perspective I would bring is not one of recession. Rather, the economy is resetting to lower level of business and consumer spending based largely on the reduced leverage in economy,” Steve Ballmer (CEO Microsoft 2000 to 2014)

An example of this normalcy can be seen throughout various economic indicators and measures. Most of us know that GDP is economic indicator used to value of all goods and services produced within a country in a specific time period, what many don’t know is that in March 2013, the U.S. government invented a new way of calculating GDP. The Financial Times reported, starting from July 2013, U.S. GDP would become 3% bigger due to a change in statistics. GDP now includes R&D spending, art, music, film royalties, books and theatre. This change in GDP statistics has not been initiated elsewhere in the world. The U.S. is the first to accomplish this rewriting of the GDP numbers. Talk about changing the goal posts! So when things don’t pan out like you hope, why not just adjust the way things are calculated, this will make everyone happy and the masses can go on living an illusion everything is alright. (2)

Unemployment Numbers are Being Massaged

The mainstream media promotes gleefully the ‘official’ unemployment rate in the United States decreased to 5.30 percent in June of 2015, a seven year low, from 5.50 percent in May of 2015. This actually meant 375,000 unemployed people disappeared from the Labor Force, as they had resigned to the fact, looking for work was futile. For those who have been following the alternative press this 5.30% is an illusionary number and doesn’t stack up in the real world, where most people live. John Williams, an economic consultant who publishes, ‘Shadow Statistics,’ examines the data many mainstream media outlets fail to update or question. Williams outlined “the numbers are a matter of definition. If you interviewed those who are unemployed you would get a much higher rate than what the government puts out as its definition.”The headline unemployment figure is calculated by examining the civilian labor force and includes only people who are working or have looked for a job in the previous four weeks. “So if you have given up looking for a job because there is no longer any point then you are not included in the headline unemployment figures.

Williams believes given the way the government’s headline unemployment rate is calculated, it can never reach 14%. This is because the when the economy gets really bad (like now), unemployed workers get discouraged and give up looking for jobs. This causes the civilian labor force to decline, faster than total employment.”155 Williams points out, back in 1994 discouraged workers were counted. If you hadn’t looked for work in the last two years but you were still ready and able to take a job the government counted you, it doesn’t now. Williams estimates that if the calculation was the same or similar to what it was back in 1994, the unemployment rate would be more in line with 23%.(3)

The Bureau of Labour Statistics (BLS), in 2014 reported 20 percent of American families do not have a single person whom is working. Michael Snyder, business analyst and author, was quoted in Zero Hedge “so when someone tries to tell you that the unemployment rate in the United States is about 7 percent, you should just laugh. One-fifth of the families in the entire country do not have a single member with a job. A family, as defined by the BLS, is a group of two or more people who live together and who are related by birth, adoption or marriage. In 2013, there were 80 million families in the United States, of which 16 million, or 20 percent, did not have a single family member working. The number of Americans getting money or benefits from the federal government each month exceeds the number of full-time workers in the private sector by more than 60 million.”(4) More recently as reported by CNSNEWS in the number of Americans 16 years and older who did not participate in the labor force–meaning they neither had a job nor actively sought one in the last four weeks–rose from 92,898,000 in February to 93,175,000 in March 2015.(5)

The Way Inflation is Measured is NOT a True Indication of the Real World.

Peter Schiff the American financial commentator, investor and author more recently discussed in detail the inconsistency with the inflationary pressures. Schiff gained notoriety when he successfully predicted the collapse of the U.S. housing market and the global financial crisis which ensued. In a radio presentation Schiff outlined, “the money printing the Federal Reserve has embarked upon over the last few years is inflation. The inflation that the Fed creates as it prints money would result in rising prices, other economists claim that inflation has not risen under this quantitative easing, however fail to recognise that the people have been relying upon government created statistics that purport to measure inflation like the CPI. The problem is the CPI is wrong, the CPI is doing a lousy job of measuring inflation and I think in fact it does so by design. Every time someone alleges that the government has been cooking the books all of a sudden it’s the conspiracy theory. How could the government be conspiring to fudge the numbers? It’s not that they are fudging the numbers it’s there methodology for computing the CPI has been deliberately designed to hide the true effects inflation has on consumer prices.” Schiff conducted his own experiment measuring a standard basket of goods and compared this to the official numbers and found that the true rate of inflation at somewhere between 7 and 10%. (6)

Ron Paul also a vocal critic of the phony inflation numbers being thrown around. He has tried to raise awareness around the inaccurate representation of inflation within the U.S. economy many times. Needless to say his efforts where ignored. “Every single day [the dollar] buys less the next day,” Paul complained to Bernanke. “To me it’s sort of like…a builder had a yardstick that changed its value every single day. I mean, just think of the kind of building we would have.”(7) Jim Rogers also a critic of the false inflation numbers on CNBC discussed the money printing which is creating inflation not just in the U.S, but globally. “Everything is going through the roof, food, education, entertainment, tolls, taxis, everything is going up, the government lies about it.”(8)

So Why is it so Important to Deceive the Public?

Most of these economic measures are in some way tied to the incomes of Americans. Approximately 80 million Americans are either directly or indirectly affected through social security benefits, food stamps, military and federal Civil Service benefits and other welfare programs. The higher the CPI, the more money the government needs to spend on these income payments to keep pace with the cost of living. The lower the cost of living CPI is the less money the government needs to spend on cost of living adjustments. Apart from luring the public into thinking everything is under control and building political kudos, the way in which inflation is measured is of importance as it determines the quality of life of many fixed income families. If you are on a government pension and the price of food, fuel and other day to day items increases and your benefit remains the same then you are worse off. The federal government and the Federal Reserve need to keep the CPI to a minimum as this not only affects how monetary and fiscal policy is implemented but also impacts the deficit. With over $17 trillion is debt, any additional expenditures adjusted for CPI will add billions onto government outlays.

The Solution – Become Self Sufficient

Under the current highly integrated and dependent industrial model many of us live under, it can be difficult to become self-sufficient. Yet there are many things we can do and many resources we can access to shift our reliance. As Mike Adams keeps promoting, growing your own food is one way to help reduce any reliance on the system. Apart from this, do a Google search on self-sufficient living and thousands of options will present themselves…

Article by Andrew Martin, author of  Rethink…Your world, Your future.

Excerpts from Rethink…Your world, Your future.