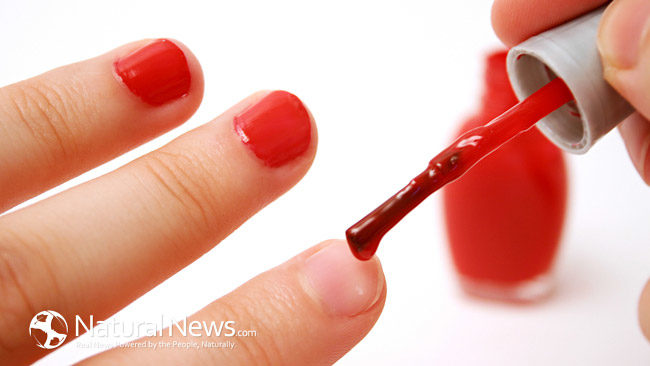 Researchers at Duke University and Environmental Working Group have concluded that an endocrine-disrupting chemical widely used in popular nail polishes is being absorbed into the wearer’s systems. The researchers found TPHP in the bodies of more than two-dozen women who participated in a biomonitoring study.

The study, published in Environment International, found that all women had a metabolite of triphenyl phosphate in their bodies only 10 to 14 hours after painting their nails. Their levels of diphenyl phosphate or DPHP, which forms when the body metabolizes TPHP, had increased by nearly sevenfold.

In a second study these researchers tested 10 different nail polishes for triphenyl phosphate and found it in 8 out of 10. To make matters worse, two of the polishes containing TPHP did not disclose it on their product label.

This is very disconcerting as the age girls begin wearing polish keeps getting younger and younger. Girls who wear nail polish regularly and for years during the years when they are still developing could be putting them at risk for future health issues.

Triphenyl Phosphate has been documented as a:

Formaldehyde is classified as a carcinogen and breathing it in or absorbing it through your skin (or nails) can cause your eyes to water, irritation to the throat and nose, asthma like symptoms and difficulty breathing. Those suffering from respiratory issues or chemical sensitivities should avoid contact with anything containing formaldehyde.

The additive toluene can slow development in infants and young children. It is a skin irritant, can cause headaches, dizziness and fatigue. It is found in gasoline and a toxic ingredient in solvents and paint thinner and certainly not something you should be putting on your fingers or breathing in.

Other companies have swapped out the TPHP for dibutyl phthalate to appear to be healthier. However, this substance is really no better and has many of the exact same health risks as TPHP and so should also be avoided.

Camphor is also found in embalming liquids, insect repellent and fireworks. Can cause skin rashes and in larger doses cause breathing issues, disorientation, vomiting and seizures.

What can you do to avoid these toxins but still have gorgeous nails?

With consumers waking up to these dangers and with great sites like Natural News and EWG.org, companies are stepping up their game and offering us healthy options. Here are a few:

Honeybee Gardens offers a natural nail polish line that is water-based. This makes them much easier to remove so you don’t have to use toxic chemicals to remove it.

Jamberry are nail wraps so the polish is not being absorbed into the skin. They are less expensive than going to the salon and have non toxic ingredients.

Acquarella has a large selection of nail polish colors. These don’t contain any formaldehyde, toluene or dibutyl phthalate.