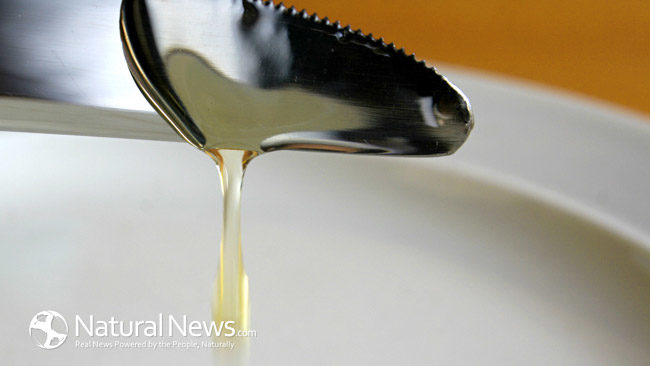 High fructose corn syrup is a man-made product that is produced by using enzymes to extract sugar from stocks of corn. This sweetener should be avoided as it has been linked to a variety of maladies including obesity, cardiovascular disease, blood sugar imbalances, diabetes, fatty liver, liver failure, leaky gut syndrome, decaying teeth, hypertension, elevated LDL / bad cholesterol levels, immune suppression, dementia and cancer. Not to mention it can actually damage DNA.

Big Food loves high fructose corn syrup because it is both cheaper and sweeter than cane sugar. Highly refined cane sugar is bad enough but high fructose corn syrup delivers a fix that rapidly enters the blood stream causing blood sugar spikes and the quick release of insulin. This in turn causes an increase in appetite and a trend toward weight gain and obesity over time.

The common sugar that sits in the pantry at home is sucrose. Sucrose is 50 percent glucose and 50 percent fructose – the molecules are held together by a chemical bond. This bond creates resistance and makes it harder for the human body to metabolize.

High fructose corn syrup is 55 percent fructose and 45 percent glucose. This may seem like a small difference but the there is no chemical bond holding the molecule together making it much easier for the body to metabolize – hence the aforementioned blood sugar spikes.

The easiest way to avoid high fructose corn syrup is to avoid sodas and sugary drinks. (No, this does not mean drinking diet / sugar free sodas as they contain aspartame or other toxic artificial sweeteners.) Normally it is best not ‘drink your calories’ but as an occasional treat there are drinks out there that don’t contain high fructose corn syrup or artificial sweeteners – Pepsi, Mountain Dew and Sierra Mist all offer beverages ‘made with real sugar’. The international section of your local grocery store may also have Mexican Coke. Snapple does not contain high fructose corn syrup and here is an article from The Huffington Post with even more ideas including Hansen’s, Blue Sky and Izze. (Again we’re talking about an occasional splurge, not a regular indulgence.)

As consumers have become more educated to the dangers of high fructose corn syrup some in the food industry have resorted to changing the name that appears on the food label. If you see Fructose or HFCS-90 move on to the next product as these both indicate high fructose corn syrup. The fact that they are in effect hiding this ingredient tells you everything you need to know.

This underscores the importance of reading food labels – know what goes in your body!

Sources used in this article include

Scott A. Keisler is the Editor of TLB.News which covers news, politics and spirituality and also health and wellness. Scott has more than ten years of experience as an independent author, citizen journalist and researcher. His articles and multi-media content have received hundreds of thousands of views in virtually every country around the globe. In 2012 Scott released his debut book 'The Omega Manifesto' which exposes the history and strategies of the New World Order. The two hour info-film Dragon’s Deception was released shortly afterward and is based loosely on the book.

Scott has been a guest on The Hagmann Report and has interviewed knowledgeable and well-known guests such as Ray Comfort, Russ Dizdar, Joe Hagmann, Tom Horn, Gary Kah, Dr. Stanley Monteith, Cris Putnam, Pastor Doug Riggs, Carl Teichrib and others.

Scott's articles and content have been featured on many alternative media and ministry platforms including SteveQuayle.com and SkyWatch TV. His articles have been referenced by All News Pipeline, Phi Beta Iota, Veterans Today, News Target, Natural News and others.

Scott has a B.A. in Journalism from Indiana University and a Master of Theological Studies from Anderson University.