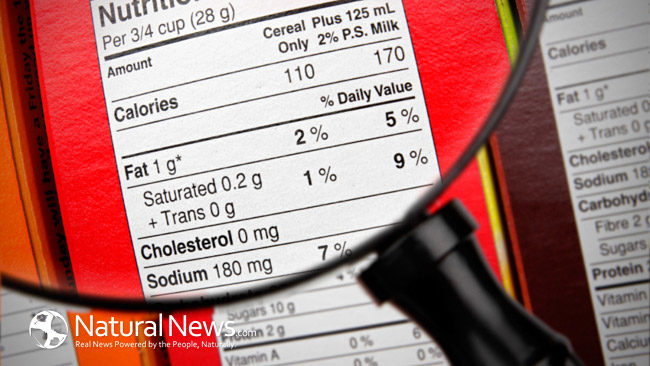 Going to a store to buy a grocery product can be as simple as picking it up and purchasing it, but if you’re concerned about what you’re eating, you might be taken aback by the deluge of ingredients of the food products you buy. A lot of them have nice names like “spices,” that in reality is a broad label for hundreds of chemicals like MSG the food industry has lobbied to allow to be hidden under that innocuous name.

The following is a guide to 14 of the most common ingredient names to watch out for and avoid if possible. At the very least, it’s useful to know exactly what it is you might be putting into your body, so you can assess the potential harms for yourself. It’s an informative guide excerpted from Natural Cures “They” Don’t Want You to Know, a natural healthcare book.

1. Anything You Can’t Pronounce
This is really easy. If you can’t pronounce the word, don’t buy it—it’s a chemical. They can call it anything they want, they can say it’s naturally derived, or that it comes from a plant, or that it’s all-natural. None of this is true. Keep in mind that food manufacturers lobby Congress through virtual payoffs and bribes to get legislation allowing food manufactures to call chemicals “all-natural ingredients.” So the bottom line is, if you can’t pronounce it, don’t buy it.

2. Monosodium Glutamate
Never buy anything with monosodium glutamate in it. If you’re not convinced, read the book Excitotoxins: The Taste That Kills. MSG is an excitotoxin. It is dangerous and deadly; it makes you fat, increases your appetite, and causes all types of physical and medical problems.

3. Aspartame
This is also an excitotoxin. It makes you fat, it makes you hungry, it makes you depressed, and it leads to all types of medical conditions, including PMS and migraines. If you’re not convinced, read the book Aspartame: Is it Safe?

4. High Fructose Corn Syrup
This is highly chemically and physically addicting, and makes you fat.

6. Sugar
The sugar used in processing is the most refined white powder you can imagine. They have take natural sugarcane and turned it into a drug. It’s put into food because of its sweetness, but also for its chemically addicting qualities. It is also laced with the chemicals used in the growing of sugarcane. This should be avoided at all costs.

7. Natural and Artificial Flavors
If it says natural or artificial flavors on the label, know this is where food industry lobbyists have done a magnificent job allowing the food industry to lie and deceive the public. There are thousands of manmade chemicals that are put into foods to make you hungry, to make you physically addicted, and to make you fat. They are also put into foods to make it last for years without spoiling, and make it so incredibly appealing to the taste buds that you can’t stop eating it. Much of the food in today’s high-tech processing loses most of its nutritional value, is energetically altered, and virtually tastes like nothing. Food manufacturers then must add chemicals to make the food taste like it’s supposed to taste. Imagine buying an apple, eating it blindfolded, and not knowing what fruit it is. Imagine food manufacturers having to inject the apple with chemicals so that the apple actually tastes like an apple again. That is actually happening today. The reason the apple doesn’t taste like an apple is because the growers have depleted the soil so much over the years, used so much chemical fertilizers, pesticides, and herbicides, and the food has been irradiated by some of the most powerful electromagnetic energy known to man, that the final product, the apple, no longer has any flavor. Compare this to an organic apple that actually taste like an apple. Just because it says “natural flavors” doesn’t mean it’s natural. The food industry has lobbied Congress to pass legislation allowing chemicals that are not natural at all to be called “natural flavors.” This is fraud. However, this is what’s going on. Artificial flavors are treated the same way. When you see the word “natural flavors” or “artificial flavors,” if you were to ask the food company to individually list the natural and artificial flavors, they would absolutely refuse. If they were to list the natural or artificial flavors used, the list could run to hundreds of chemicals put into that food under term “natural flavors” or “artificial flavors.” The other major problem with chemical additives in the food is a single chemical may not have major immediate negative effects. But when you combine two or three chemicals together, just like in chemistry class, new chemicals are formed. Scientists at the food companies know this. What these new chemicals do is incredibly dangerous and incredibly powerful—so stay away.

8. Spices
This is the other great fraud that the food industry is perpetrating on the American public. Spices sound wonderful and healthy, but they are not. The food industry has lobbied Congress to pass legislation allowing chemicals to be called spices. They are not spices. They are man-made, deadly chemicals, but legally they can be called spices. When you ask what spices they use, they won’t tell you. If it was just organic, all-natural spices, why are they afraid to tell you the two or three different spices they are using? The reason is, they are not using two or three real spices that you may be familiar with. They are using hundreds of chemicals and putting it in the food, but on the label they only have to use the word “spices.” So imagine you buy a can of some product and it says “spices” on there. You think they may have put in some basil, some salt, some pepper, some oregano, or something like that. But in fact they have probably put in one or two hundred different man-made chemicals that have been researched diligently in the secret chemical laboratories that the food industry uses to make this food taste like something, and have other desired benefits for the food company. If they don’t list individual spices, but just use the generic term “spices,” stay away. Also, monosodium glutamate can now be classified as a spice.

9. Artificial Color
Any dyes at all, stay away from. They are simply chemical poisons.

10. Palm Oil
A deadly oil that is incredibly cheap to manufacture, and causes all types of physical problems.

11. Dextrose, Sucrose, Fructose
These are, in fact, chemically made sweeteners. Stay away.

12. Sucrulose-Splenda®
This is one of the newest, hottest man-made chemical sweeteners. In my personal opinion, it is very deadly, poisonous and makes you fat. It was produced so that the food industry could capitalize on the low-carbohydrate craze. Now, products can have “no carbohydrates” or “low carbohydrates” and still taste sweet. The problem is that it’s unnatural, it’s artificial, and these man-made artificial sweeteners do in fact increase your appetite, make you depressed, cause all types of symptoms (including migraine headaches, PMS, depression, fibromyalgia, allergies), and most importantly, make you fat. So stay away.

13. Enriched Bleached Wheat Flour, and Enriched Bleached White Flour
Remember, stripped down white flour or bleached wheat flour has virtually no fiber. It has been totally depleted of all nutritional value and produced in a highly chemical environment, and is actually turned into such a highly refined product that it has many of the same properties as drugs in terms of how the body physically reacts when it is ingested. Really the only kind of flour you want to see is organic wheat flour or organic other types of grain flour, such as rye, millet, etc.

14. Soy Protein Isolate
This is a common ingredient in protein shakes and protein or food bars. Stay away from this. You will virtually never see organic soy protein isolate. The reason is that in the processing of soy protein isolate, hexane is often used, which is a petroleum solvent similar to gasoline. Certainly these chemicals, or residues of these chemicals, remain in the food, but they are never listed on the label.