Sweeteners: The Good, the Bad, the Ugly – 5+ Popular Sugars 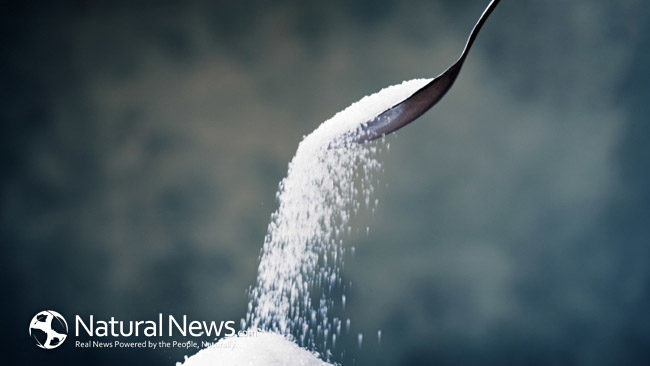 Sweeteners are a hot topic, applauded by many and detested by others. Some artificial ones are enjoyed for their supremely sweet taste (the sucralose Splenda, for example, is 600 times sweeter than sugar), yet others avoid the likes of saccharin, sucralose and aspartame at all costs due to the role they play in causing severe health problems.

“Safer” alternatives exist, yet the value they provide the body still remains questionable. Of course, people also use raw sugar, agave nectar or sweeten foods with cinnamon or honey.

With so many options and so much health news circulating about each, it’s often hard to decide what’s best for us.
To help cut through the clutter, we set out to explain the pros and cons of the most common sweeteners. Hopefully, this information will shed light on sweetener options so you can make the decision that’s best for you.

Bottom line: if you’re interested in staying on top of your physical and mental health, as we assume all Natural News readers are, stay away from artificial sweeteners. Far away.

Our very own Jonathan Cho reported in December 2013 that one such sweetener, aspartame, is made with GMOs. In fact, he mentions that even back in 1999, Monsanto made this admission. We all know that foods made with GMOs have been linked to a range of health problems from skin disorders to cancers.

Besides, just look at the name: artificial sweeteners. Anything that’s artificially made is not natural. It’s highly-processed, lacking quality and stripped of nutrients all in the name of mass marketing and preserving the product (longer shelf life is appealing to many supermarket chains as well as some consumers, but beware).

The three most common types of artificial sweeteners are aspartame (NutraSweet, Equal), sucralose (Sweet ‘N Low, Sugar Twin) and saccharin (Splenda). No doubt, we’ve seen their colorful packets on restaurant tables, in coffee shops and on supermarket shelves. However, while all are approved by the FDA, studies have shown them to have ties to certain cancers, behavioral disorders and headaches, to name just a few. In the 1970s, saccharin was actually banned based on toxicological studies showing it may be riddled with impurities that could cause bladder cancer. Yet, it’s on the market today, used in droves.

Aspartame and sucralose came into existence primarily as a better-tasting alternative to saccharine’s bitter flavor. While they may have a less metallic aftertaste, Equal and Sweet ‘N Low are still not advocated. They too, because they are artificially made and therefore have questionable aspects about the impact they have on our health, should be avoided.

Still, many suggest that they (as well as saccharin) are safe, putting them in the “debatable” category for some. In this manner, there are those who feel that artificial sweeteners would have to be consumed in such unrealistically large quantities in order for a human to face detrimental health consequences. Even the Academy of Nutrition and Dietetics (formerly the American Dietetic Association) mentions that such sweeteners are safe for adults when they are eaten along with a diet that’s in line with established dietary guidelines. Some advocate their use for diabetics or those keeping an eye on their weight, touting their low-calorie benefits. However, not everyone falls for the hype.

Take Jennifer Lilley, who has kept the 70 pounds she lost in 2007 at bay. She admits to finding the low-calorie lure of artificial sweeteners very appealing, using it for years. But as of 2013, she quit the habit altogether. “How could I, after losing 70 pounds and keeping it off for six years, really say I’m adopting a healthier eating lifestyle when I was ingesting brain-tumor causing chemicals?” she writes in her post titled, “Practicing Safe Sugar” on her web site FlabbyRoad.com. She adds that “. . . after aspartame is metabolized, the body produces Diketopiperazine, DKP, which has been said to possibly cause brain tumors.”

Furthermore, much to the disappointment of the weight loss community, recent studies show that artificial sweeteners can actually cause weight gain. Lilley explains that “there’s the argument that the extremely sweet taste signals the body’s cells to store fat and carbs, leading to intense food cravings. Even the American Cancer Society has noted that people consuming the stuff in the pink, yellow and blue packets gain more weight than people who don’t consume these products.”

Enter Stevia, another artificial sweetener, with a twist.

2. Stevia: The Safe Sweetener Alternative. Or is it?

Much to the enjoyment of those frustrated with the possible health consequences of the likes of Equal and Splenda, Stevia appeared on the market.

Stevia, which goes by the names PureVia, Sun Crystals and Truvia, comes from the stevia plant, known to provide sweetness.
Like saccharin, it too was once banned as a food ingredient in the United States. However, in 1994, the Dietary Supplement Health and Education Act deemed it legal to sell Stevia in the United States, so long as it was sold as a dietary supplement only. Flash forward to 2008. The FDA found that the leaves of the stevia plant were suitable for GRAS (Generally Recognized as Safe) status, paving the way for it to be sold not just as a supplement, but as a general-purpose food.

Still, studies exist that make the case for Stevia’s role in possibly leading to cancers, chromosome damage and complications for diabetics. Yet other studies show that stevia may actually be good, in some cases showing no negative outcomes for diabetics. For this reason, stevia remains one of the more debatable sweetener options, touted as healthy, but one that should still be questioned.

Raw sugar, void of the low-calorie promise and the unsettling health consequences so common to artificial sweeteners, seem to be a better option. While there is little processing involved, most raw sugars are significantly safer than Equal or Sweet ‘N Low. Demerara, Turbinado and Sucanat are some common options. Yet for some people, they remain questionable, as any amount of processing no matter how small, is thought to render any product unhealthy. Still, they’re a better option than artificially made sweeteners. Demerara sugar, for example, is not refined and its molasses flavor and crunchy texture is often used to top foods.

Many people shun “typical” sugars like raw or artificial ones in favor of spices like cinnamon. Cinnamon adds an enjoyable sweet flavoring and even better, is known to have a multitude of health benefits from diabetes management and brain function to helping prevent tooth decay. However, some hesitate about having too much. Some information has circulated showing that excess consumption of the spice can irritate the liver and therefore should not be used by those with inflammatory liver diseases. That notion is also debatable, with additional research needed.

This nectar is heralded by many based on the fact that it’s made from real sugars, ranks low on the glycemic index and imparts a rich flavor. Inulin, a form of fructose in agave nectar, is responsible for its sweet taste. Many people gravitate towards this natural sweetener, not only for its delicious taste, but the fact that it extends a sweet flavor minus the unhealthy sugar spike so many other sugars do. Aside from consumption, agave nectar is known to have other health benefits. The Aztecs used it along with salt to create a mixture that helped heal wounds. Even today, a similar combination has been found to have anti-microbial properties, especially when applied to the skin.

Of course, we’re all aware of common table sugar, also known as granulated sugar, which is highly refined. Its process-crystalize-dry process is not heralded by those seeking a pure, healthy diet.

Honey, cocoa powder and coconut oil are also used (all with many health benefits ranging from improved immune systems to better skin) to sweeten drinks and food.

Coconut oil is considered a healthy fat and suggested for use in everything from steaming vegetables, mixing with hot water or adding to hot cereals. Did you know its other benefits also include healing dry skin when applied topically or that it can even be used as a furniture polish? Sweet, indeed!

So clearly the list goes on. Some may prefer spices other than cinnamon. Others find enjoyment in maple syrups.
The best bet is to stay informed of updates regarding all sweeteners and choose options that fit your personal dietary needs and preferred lifestyle. In each case, choosing organic or raw is ideal, not just when it comes to sweeteners, but all products.