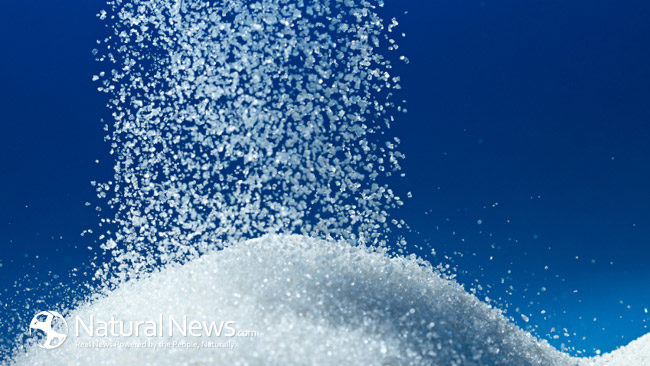 Non-nutritive sweeteners such as Splenda have become an important part of everyday life and are increasingly used nowadays in a variety of dietary and medicinal products. They provide fewer calories and more intense sweetness than sugar-containing products.

Common artificial sweeteners aspartame, saccharine, sucralose, neotame, and acesulfame-K have received a ‘safe status’ from the FDA. However, they are not so safe, and some of them can be very dangerous. If you are still using artificial sweeteners, you may be slowly killing yourself.

You can find Artificial Sweeteners not only in our food and beverages, but in a variety of other products such as toothpastes, mouthwashes, medicines (often in cough syrup and other OTC), children’s chewable vitamins, chewing gums, diet drinks, a variety of sweets, protein drinks, canned food and many more (literally thousands of products). Sadly, some of these sweeteners are now common contaminant in our tap water.

These agents are claimed to promote weight loss and are promoted as a safe alternative for diabetics. However, research data indicates that artificial sweeteners tend to lead to weight gain, and are not suitable for diabetics at all.

There are plenty of natural healthy products you can use in place of sugar and artificial sweeteners.

You probably heard about aspartame dangers, but let’s take a closer look at dangers of Sucralose:

1. WHAT IS IT AND WHERE YOU CAN FIND IT

Sucralose (Marketed under the name Splenda), 600 times sweeter than sugar – a better alternative to NutraSweet? Not so much.
You can find sucralose in yogurts, protein bars and drinks, frozen desserts, syrups, diet beverages, kettle corn, prepared meals and baked goods such as English muffins (this sweetener is one of the few not so sensitive to heat). Please be careful when purchasing ‘natural healthy’ products as well, because some of them may contain sucralose. I have seen it in chewable vitamins for kids, elderberry tablets and so on, always read the ingredient list carefully.

Splenda has been promoted as a better alternative to refined white sugar and advertised for a long time as “made from sugar, so it tastes like sugar.”

Yes, Sucralose is derived from sugar; however, its preparation involves chlorinating sucrose, changing the structure of the sugar molecules. Yes, chlorine, known carcinogen and one of the most toxic chemicals on the planet. This type of sugar molecule does not occur in the nature, and your body cannot properly metabolize it. Also, your body absorbs Sucralose into your fat cells.

”Sucralose (Splenda) bears more chemical similarity to DDT than it does to sugar.” (According to Dr. Mercola)

Splenda has been approved in the United States in 1998. When sucralose was first being considered for approval by the FDA, CSPI objected. The pre-approval test indicated potential toxicity, but again – approved! Pre-approval research in animals showed that sucralose caused shrunken thymus glands (up to 40% shrinkage – important immune system regulator) and enlarged liver and kidneys. Its long-term safety is unknown (but it will NOT be anything good for sure).

In 2013, the Center for Science in the Public Interest (CSPI) placed Splenda in its “caution” category and had formally recommended that consumers should avoid sucralose altogether. A recent update from 2016 – CSPI Downgrades Sucralose from “Caution” to “Avoid”! This action was an answer for the latest 2016 independent Italian laboratory study, which published extensive research on mice. The study found that sucralose caused leukemia and related blood cancers in male mice.

The artificial sweetener sucralose has recently been shown to be a widespread of contaminant of wastewater, surface water, and groundwater. In fact, sucralose has been found in the U.S. drinking water systems. Recent research found that sucralose has a low rate of removal (11%) in drinking water tested that presently serves 28 million people.
The sweetener was found to be present in:

The source water of 15 out of 19 of drinking water treatment plants tested
The finished water of 13 out of 17 plants, and
In 8 out of 12 water distribution systems.

Sucralose is largely resistant to natural breakdown processes and accumulates in the environment with unknown consequences for human and environmental health.

”Though sucralose does not appear toxic to plant growth, the persistent qualities of sucralose may lead to chronic low-dose exposure with largely unknown consequences for human and environmental health.” Sucralose represents an ecotoxicological contaminant that significantly affects the behavior of animals: “Exposed organisms may diverge from normal behavior, which ultimately can have ecological consequences.”

Splenda can promote migraine headaches, and other reported side effects include muscle aches, stomach cramps and nausea, allergic reactions, bladder issues, skin irritation, dizziness, inflammation, vision problems, neurological problems and much more (including Seizures). Sucralose long-term intake can lead to serious chronic conditions and disorders. There are several testimonials by people from all over the world about The Potential Dangers of Sucralose.

Another study found that sucralose significantly reduced healthy intestinal bacteria (up to 50%!). It also alters gut microflora and mess with your enzymes as well, so it essentially wrecks our immune system. In addition, it increases the pH level in the intestines. This could have a range of consequences, including effects on blood sugar, inflammatory bowel disease and more. In fact, a study says that: “Increased sucralose consumption may explain why Canada has the highest incidence of inflammatory bowel disease in the world.”

Unlike aspartame, sucralose does not break down at high temperatures. However, by cooking and baking Splenda a cancer-causing dioxins and dioxin-like compounds are formed.

”It is like putting a pesticide in your body. And this is at levels of intake erroneously approved by the Food and Drug Administration.” (According to James Turner, the chairman of the national consumer education group Citizens for Health.)

Also, sucralose passes into breast milk at levels high enough to make the milk sweeter. Saccharin, sucralose, and acesulfame-potassium were present in 65% of participants’ milk samples, whereas aspartame was not.
Therefore, pregnant and nursing women should make a special effort to avoid aspartame, ace-K, Sucralose and other artificial sweeteners.

Splenda has NEVER been proven safe for human consumption. According to Johnson & Johnson, which markets Splenda, “more than 110 studies conducted over 20 years have proven the safety of sucralose.” You mean the studies which were funded by companies with the sole interest in the product being used and to maximize the profits? Moreover, ”out of these 110 studies, only two were human studies, and the longest one was only four days (and in relation to tooth decay!)” Also, those animal studies reveal plenty of problems such as:

Long-term effects on humans is a severe issue. If something causes cancer and other serious health problems in rodents in the studies, it is undoubtedly a reason for concern!
CSPI recommends that consumers avoid sucralose.

From all these natural alternatives, I always recommend the ‘organic version.’ I use only real manuka honey as a sweetener, and if occasionally baking I use coconut sugar (date sugar is good too!), I eat plenty of organic fruits so no need for more unnecessary sugars.

Sucralose does not seem to be as safe as the FDA is trying to believe us and you should avoid it. Also, keep in mind that Xylitol, Sorbitol, and other sugar alcohols are life-threatening toxins to dogs! Don’t forget that you can find artificial sweeteners not only in our foods and medicine, but in many other products, so switching to ‘raw honey’ alternatives is a critical step, but another major step is to get rid of all the products containing them and look for healthy natural alternatives. With all the toxins, chemicals, and heavy metals everywhere and in almost everything, it is imperative to start slowly eliminating these threats to your health. Also, keep in mind that Splenda is now present in our tap water, so filtering your water with hi-quality filter systems is becoming essential.

I am into natural medicine and healthy lifestyle for more than 12 years. Writing about natural healthy lifestyle, longevity, herbs & supplements, nutrition, mental health, exercise, holistic medicine, healthy home, toxins&chemicals and much more. ''With natural medicine nothing is impossible, all diseases can be cured and prevented, with the right approach and 'open eyes' we can all live healthy and happy to 100+''


SUPPORT ME BY FOLLOWING MY WORK ON FACEBOOK or TWITTER
Thank you, I wish you long, happy and healthy life.
oh and My personal FB - facebook.com/hajekherbalist , feel free to add me if you're into natural health.