What are we really eating on Thanksgiving? 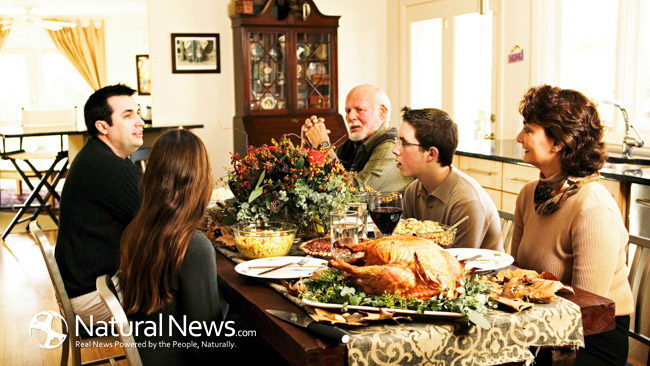 Has it ever crossed your mind about what happened to the turkey before it landed on your table? We all know that having a big, fat, juicy turkey on Thanksgiving is an American staple. There are over 267 million turkeys sold in America for Thanksgiving. That’s a lot of turkey! Over centuries, we’ve been conditioned to eat farm raised turkey that looks perfect, and tastes perfect. What happened to Grandma chasing the turkey around the farm to kill it for the family Thanksgiving feast? The problem is we’re not sure what’s behind all this turkey production. We’re talking 267 million turkeys, how do they keep up with production? Let’s dig deep as to what’s really going on with all those turkeys!

Many of us go to the store, pick out the bird, and maybe even score a $10 off coupon.  We don’t even stop to think how it was conceived, what it ate, or ask if it was inoculated with antibiotics. We’re so consumed with brining, sides, ingredients, decorations, etc…Even though it’s only once a year, we should still question everything that we put into our body.

Why should we care about one turkey?

There are three major companies that produce turkeys for the big day. Those companies are Butterball, Hormel, and Cargill. They all endorse Monsanto. Let me repeat, they ALL endorse Monsanto. What does that mean for you?  You get to digest GMO seed just like the turkeys did. Not only that, they all endorse the medical and pharmaceuticals companies. To top things off, all 3 companies are under scrutiny for animal cruelty.

In February 2012, five Butterball employees and a top level Department of Agriculture official were convicted of animal cruelty and obstruction of justice. An undercover investigation showed employees beating turkeys (yes the ones on your dinner table), throwing them in crates, kicking them, and trying to make them fly when they’re engineered not to fly[1]. See, you can’t produce 267 million turkeys without having a strategic plan. It begins with engineering turkeys that will produce big breasts. Because of this, the bird won’t be able to walk or fly. They can also engineer the size of the bird to make it easier for consumers to pick which size fits their family’s needs.

How turkeys are engineered for your dinner table.

It began with cross breeding genes that makes what we know now as the broad breasted white turkey.  These birds are related to wild turkeys but are very different. Here’s why: “Industry-bred birds have unusually large breasts, so disproportionate with the rest of their bodies that they often have trouble standing, walking and mating — these turkeys rely on artificial insemination for reproduction. They begin life hatched in incubators, have their upper beaks and toenails clipped and spend their days and nights eating fortified corn in a barn full of hundreds of fellow turkeys. Their limited family tree has bred them to be dim-witted and disease-prone; they’re given antibiotics to prevent a variety of ailments. Industry turkeys are abnormally fast growing, and by the time they’re 12 weeks old, they’re shipped off to the slaughterhouse.” [2]  Can you imagine an animal growing to adult size in only 3 months?  That has to make you scratch your head.  They can manipulate genes to grow the birds to the exact size the consumer prefers.  I don’t know about you, but this sounds extremely unnatural to me. The funny part is, these companies advertise their turkey as “all natural”.

As stated above, turkeys are eating corn…genetically modified corn that is. There is more unpleasant news regarding what is being added to their diet that is rather disturbing. Hold on to your pants folks because this one is about to blow you away. Researchers who took samples of US turkeys found traces of Tylenol, arsenic, fluoxetine (active ingredient in Prozac), diphenhydramine (active ingredient in Benadryl) and BEER[3]! For all of you who are gluten free, if the bird drinks beer (GMO of course) the turkey will NOT be considered gluten free. That’s the least of our problems though.  These poor turkeys are getting drunk, with beer oozing out of their beaks, glazed over eyes and necks that can barely lift off the ground. Supposedly, beer gives the turkey better taste and allows the turkey to grow faster. This is in addition to the growth hormones their given.  Are you thinking of returning your turkey now?

As a dietary staple, corn is predominantly the bird’s primary source of nutrition. The problem is corn is not only genetically modified, but its all starch which has no nutrient density what so ever. In the wild, turkey’s live on the land. They eat a great variety of foods, including: insects, spiders, snails, slugs, salamanders, small lizards, small frogs, millipedes, grasshoppers, very small snakes, worms, grasses, vines, flowers, acorns, buds, seeds, fruits, clovers, dogwood, blueberries, cherries, and hickory nuts.[4] Nowhere do they eat corn or soy. It’s just not natural to their diet. Wild turkeys are also beautiful with gorgeous feathers, wings with vibrant colors. White breast commercial turkeys are ugly, and they’re starving for nutrition. They often over eat because they’re bodies are depleted of nutrients. Even though they’re starving, they’re still FAT!

The big breasted white ugly bird is born in an incubator, raised on GMO corn, has 3 months to live, shoved in a barn with no room to roam, and has to fight off other hungry aggressive, agitated turkeys. That’s not a happy bird to say the least. Because the bird’s diets are not naturally conducive to their digestive system, the birds get sick. They are given tons of antibiotics; it’s in their food EVERYDAY. It’s used for growth purposes, somehow, the antibiotics help the bird fatten up. Now big corporations such as Cargill are saying they are stopping antibiotic use for growth purposes. They will, however, continue to use antibiotics for disease and illness prevention.

Another fascinating fact is that all turkeys are given vaccines. They’re given at least 11 vaccines before the ripe old age of 28 weeks.  Which of course, then off to the slaughter house they go. That’s if they get to live to 28 weeks old. According to OEN, more likely than not, a turkey is sent to the slaughter house with, “painful footpad lesions, swelling and dermatitis, deviated toes, arthritis, feathering picking and breast blisters.” The birds are also being slaughtered with Clostridial dermatitis and cellulitis which is a condition of the skin due to poor living environments, a contaminated environment including feed and water, poor hygienic conditions, and contaminated vaccines and vaccine equipment.  The disease is characterized by reddish to dark or greenish discoloration of the skin around the thighs, abdomen, keel, tail region, back, and wings. The lesions can extend into the underlying muscles, and there can be gas bubbles under the skin which result in crepitation[5].

As we conclude, purchasing a turkey without it being organic and humanely raised isn’t conducive for human consumption.  Of course the best way to know where your turkey is coming from is to raise your own, but for those who can’t, buy organic or from a local farmer you trust. Make sure their feed is organic, and they don’t use antibiotics. It’s quite bothersome as well that turkeys are being vaccinated which most likely means they are getting a healthy dose of mercury, liquid nitrogen, penicillin (antibiotic), streptomycin sulfate (another antibiotic), fungus, and other toxic material. Sounds appetizing, doesn’t it? How about skipping the bird and starting a new tradition like running in a Turkey Trot, serving at a local homeless shelter, or just spending time in gratitude. Thanksgiving after all, is about being thankful for all the good in life.