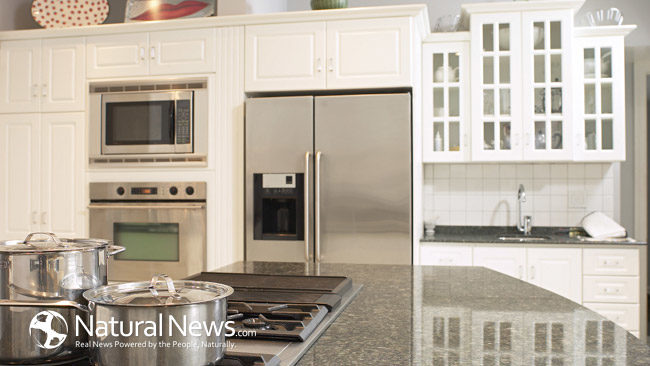 Outdoor Environmental Education classes are at their peak this time of year. While I have been busy teaching outdoors, an indoor concern came up in conversation with other teachers. So since my blogs have been in a lull the past two weeks due to my great outdoor teaching schedule, this blog is about the sometimes not so great indoors.Do you have granite countertops in your kitchen or bathrooms? If yes, then you need to know the truth about granite countertops:

Yes, “some” pieces of granite “may” emit naturally occurring radioactive elements such as radium (radon), uranium and thorium. Some granite contains more of these elements than others and this is just a fact about any igneous rock. The process for granite starts by forming as molten rock, then cooled and solidified over tens of thousands of years. This slow forming granite has beautiful and distinctive patterns in many colors from the various minerals growing into crystals.

Does this mean you should avoid buying or rip out your granite tops?

No, but some people have done so because of reports the Environmental Protection Agency (EPA) has been receiving from Radon Inspectors about granite countertops with radiation measurements well above the normal background levels.

EPA states action should be taken in a home where radon is seeping into a house’s basement from the naturally decaying uranium underground that exceeds a measurement of 4 picocuries per liter of air. Equivalent to smoking half a pack of cigarettes per day. This is found in types of ground that are heavily infused with rock formations. Sandy soil doesn’t have a radon issue.

Most granite tops are safe and have no measurable readings, others are within the range of normal or low readings, but there seems to be a relationship between granite with dark and/or exotic colors to higher radiation measurements. For example, the New York Times reported on a salmon-colored granite that had readings of 100 picocuries per liter while the homeowner’s basement, where radon is expected to be high, was only 6 picocuries per liter. Now does this mean all salmon-colored granite will have these readings? No, each cut of granite will be different in the amount of radon gas being omitted, if any at all.

For the vast majority of humans, we are hit with background radiation constantly from our sun, earth’s crust and man made radioactive items such as luminous watches or X-rays. The average person can receive an annual level of 360 millirem (amount of energy absorbed by the human body). So if you had a granite top giving off 100 picocuries per liter and you were only inches from the granite for one hour, you would absorb a fraction of one millirem. Taking a flight from New York to Europe will give you about 3 to 4 millirem. Yet, if you are cooking in the kitchen every day for two hours a day, thus hovering over a potentially high emitting countertop, the numbers may add up to over 100 millirem in less than the stated one year time period.EPA doesn’t study health risks associated with granite that gives off higher readings due to a “lack of resources,” so I would like to suggest the following for consideration:If you are concerned that radon may be seeping into your basement, get tested. Radon test kits are for sale in most Home Improvement stores if you wish to do this yourself. However, if readings determine action is necessary, have all the cracks in the floor and corners of your basement sealed professionally.

If you are concerned with countertops giving off any level of radiation, look into natural quartz countertops. However, like any natural stone, there may be a trace amount of radon escaping from them. So seek out quartz countertops that are actually made from resins, glass and quartz and are sealed when manufactured. When countertops  are permanently sealed, if any radon was present, none will be released.