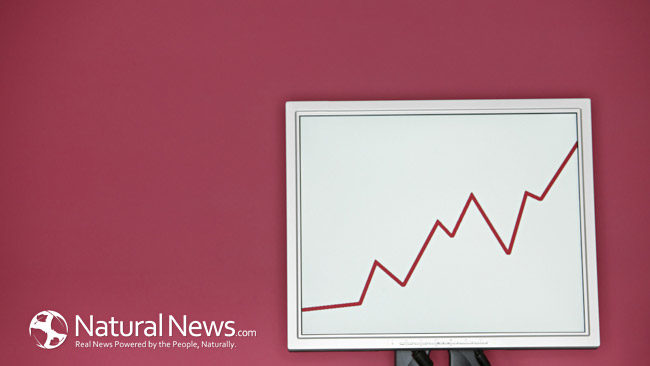 Over 60 countries have placed restrictions on selling GMO foods. However, the U.S. government has yet to impose any federal legislation to label GMOs in America.

Annie’s saw a 24% increase this last year. Earnings per share were up 19.1% and consumption was up 22%. Their last quarter netted $57.9 million in net sales.

Another recent example is the Kellogg Company. Since March 2013, Kellogg’s has hit “resistance.” “Resistance,” in financial speak, is when a stock reaches a plateau. It’s expected to fall before leveling out once it hits this “resistance.”

Since Kellogg’s announcement of “Project K,” the stock has dropped another 3 points in the last 3 weeks.

Project K is an initiative to lay off 7% of Kellogg’s work force. Instead of supporting consumer trends that want non GMO foods, Kellogg’s has been a supporter of the anti GMO labeling bills in Washington and California.

According to InspirationGreen.com, Kellogg’s donated $790,700 to defeat Prop 37 in California. Another $222,000 to defeat Initiative 522 in Washington.

Over a million dollars spent by Kellogg’s to keep GMOs off labels. Now they’re cutting back on their workforce.

What’s odd about Kellogg’s story is that the company was founded on practices followed by the Seventh Day Adventist Church. The SDA church is known for its emphasis on diet and health, and its “holistic” approach.

However, Kellogg’s is the company that makes Frosted Flakes®, Pop Tarts®, and the recently acquired Pringles®. All of these food items are considered junk food with little or no nutritional value by doctors and nutritionists.

A food awakening is happening. Driven largely by the soaring rates of gastrointestinal disorders, obesity, diabetes, and cancer. Especially with the uncertainty happening with our healthcare system, consumers can no longer afford to remain illiterate about what they are putting into their bodies.

Companies that recognize this consumer awareness trend are seeing explosive growth and share prices are skyrocketing.
Kraft is another example of stagnate growth. In March 2013, the price per was roughy $52. Today it’s $53. Kraft foods spent $2 million to defeat the GMO labeling initiative in California.

People are waking to the detrimental effects of artificial dyes, artificial growth hormones and genetically engineered ingredients. People are also becoming wary of the companies using these deadly additives in foods.

These additives that are backed by scientific studies to cause asthma, diabetes, autism, allergies, ADHD or a number of other health conditions affecting our kids today.

Yet these companies continue to use them because “they’re cheaper.” In other words, these companies don’t respect their own consumers, and continue use these poisons despite consumer demands.

The demand for non GMO food is not a fad. The food awakening is on. Families are paying attention to food companies. Non GMO companies are gaining a definite market advantage.

As consumers wake up to the ill effects of many ingredients found in foods, the question is not will GMO foods be labeled…they will. The real question is: “Which bio stock is next to likely drop like a lead balloon? And which non GMO company is the next to take a rocket ride?

Brett Allen is the author of The NO GMO Diet. Brett is absolutely convinced that GMOs cause a host of current health problems that are being denied by by big agribusiness. He appreciates and is thankful for non GMO companies and local food to table movement.