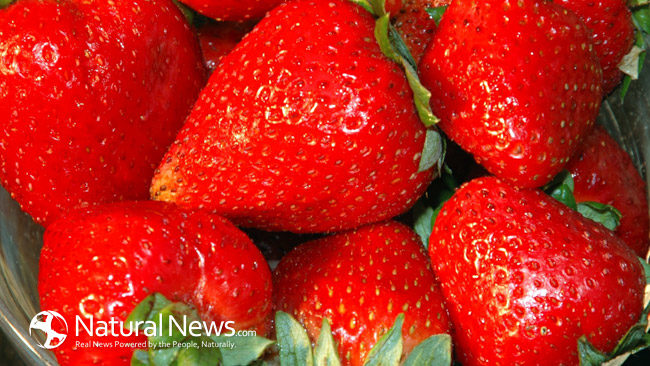 The 2016 “Dirty Dozen” List revealed by the EWG is…not apples. For five years running, conventionally grown apples have garnered the dubious award of first place on the Environmental Working Group’s Dirty Dozen list. The list is published each year by this reputable industry watchdog which releases consumer safety reports on everything from food to personal care products.

And the Winner of the 2016 “Dirty Dozen” List is…STRAWBERRIES!

The group’s goal is to protect consumers from pesticides and other harmful chemicals in everyday products. This year’s 2016 edition of EWG’s Shopper’s Guide to Pesticides in Produce was recently released and the big surprise was strawberries which topped the Dirty Dozen list for the first time. After extensive testing, the USDA has found that strawberries are most commonly contaminated with pesticides, even after washing before eating.

The EWG reports that, “In 2014, USDA scientists tested 176 batches of strawberries – about 85 percent grown in the U.S., with the rest from Mexico. When we added the 2014 test data to results from tests of 703 batches in 2009, strawberries displaced apples at the top of the Dirty Dozen list of U.S.-marketed produce most likely to be contaminated with pesticide residues.”

Here’s what you can expect to ingest along with conventionally grown strawberries:

All in all, the fact is now proven that conventional strawberry growers use over 60 different pesticides in a variety of combinations for their crops.

Apples have traditionally topped the EWG’s Dirty Dozen list because of continued mega use of pesticides in orchards. To discover that strawberries have edged out apples for the number one slot is NOT good news.

Even though this is disturbing, common pesticide applications do not violate weak EPA standards regarding produce.

The EWG reports that, “Today the average American eats almost eight pounds of fresh strawberries a year – nearly four times as much as in 1980.”

How to Avoid Contaminated Produce on the 2016 “Dirty Dozen” List

Guess it’s about time we all started eating organic, huh? Buying organic strawberries is a small price to pay to avoid eating pesticide residues and to protect farm workers from exposure to harmful, even life threatening chemicals.

Even better yet, avoid eating the number 1 fruit on the EWG’s Dirty Dozen list, fresh strawberries, by growing your own organic produce. With very little effort, you can eat healthy and save money at the same time.

12 Most Pesticide Contaminated Fruits And Vegetables