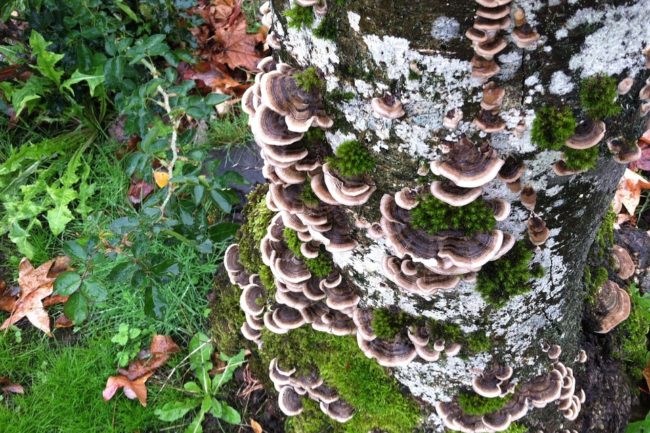 In what may be the most significant health discovery for mycologists and health researchers since the invention of penicillin (which was derived from the fungus Penicillium), research continues to mount as to the amazing healing effects of Turkey Tail mushroom against Breast Cancer.

The news about Turkey Tail made headlines in 2012 when the FDA approved clinical trials to test the cancer-healing properties of Polysaccharide K (PSK), an extract that comes from Trametes versicolor, or Turkey Tail mushroom. Turkey Tail has been used medicinally all over Asia for thousands of years, usually in tea form. As of 2014, the clinical trial, sponsored by Bastyr University and head researchers Cynthia Wenner PhD and Masa Sasagawa, ND, was in Phase I/II with women who have Stage IV breast cancer.

One of the first study reports that Bastyr University researchers published, along with their partners from the University of Minnesota Medical School, showed that the Turkey Tail extract (PSK) was successful at restoring the immune systems and improving the health of women who had undergone traditional cancer therapy (radiation in particular). The study found that Turkey Tail mushroom extract was able to increase the level and activity of Natural Killer Cells as well as “cytotoxic T-cells.”

The job of NK cells in the body is to hunt down harmful pathogens, especially cancer cells, and destroy them. All the women in this part of the trial had raised lymphocyte as well as NK cell counts after a daily dose of 6 and 9 grams over a period of 4 weeks. Those women who were given the higher amounts (9 grams) showed higher levels of T cells. No negative side effects were discovered with any of the women.

Famed mycologist and author Paul Stamets, whose mother healed from breast cancer with the use of Turkey Tail in 2009, has been one of the main providers of Turkey Tail mushrooms and has also served as director of research for many past studies.

“Cancer is notorious for its ability to evade immune detection,” says Stamets. “One theory is that when patients ingest our Turkey Tail mycelium, the immune system’s increased populations of NK cells and their associated CD8 glycoproteins are better able to discover and bind to receptor sites on the stroma of tumors, thus allowing NK invasion.”

Dr. Wenner of Bastyr University recently spoke about their findings to a group of over 100 clinical oncologists in Tokyo.

“The opportunity to present our findings to an international audience is quite important,” Dr. Wenner said in a statement. “Having worked as an investigator on the study since 2004, it felt like a fitting conclusion to bring back these positive findings to a group that has access to this mushroom extract and can apply our findings to treatment options in their oncology practices and in doing further research.”

PSK/ Turkey Tail extract is still not approved for medical use in the U.S. but perhaps the final results of the Bastyr University study, combined with the results of all the other Turkey Tail mushroom studies over the years, will finally push the envelope towards approval soon.

One thing is for sure: the positive evidence demonstrated so far by the Bastyr study as to how Turkey Tail has helped reinvigorate the immune systems of Stage IV Breast Cancer patients proves that with a little help from Nature, the body can– and does– heal from cancer.

Dr. Veronique Desaulniers, better known as Dr. V, is the founder of  The 7 Essentials System ™, a step-by-step guide that teaches you exactly how to prevent and heal Breast Cancer naturally. To get your FREE 7-Day Mini e-Course and to receive her weekly action steps and inspiring articles on the power of Natural Medicine, visit her at BreastCancerConqueror.com