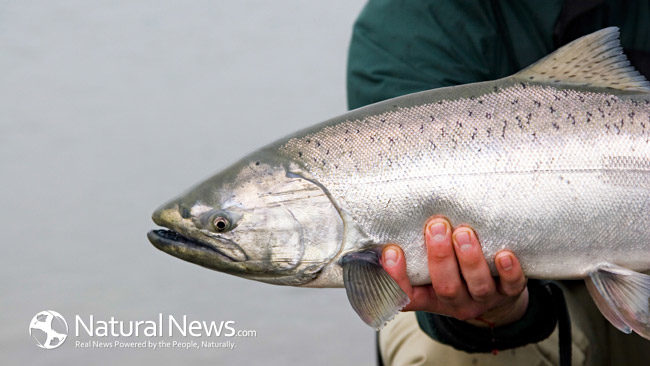 In an attempt to facilitate the growth of Atlantic salmon, the FDA approved genetically re-engineering the endangered species. AquaBounty Technologies, Inc., of Maynard, Massachusetts, is to engineer the genetic modification of the Atlantic salmon — or AquAdvantage salmon.

AquaBounty Technologies is a biotechnology company, which engages in the research and development of products that aim to increase the productivity of aquaculture.  The biotech company plans to genetically modify the Atlantic salmon with DNA from three fish — Atlantic salmon, Pacific king salmon, and Arctic Ocean eelpout.

The genetic modification of the Atlantic salmon is engineered to induce the species to have higher levels of a growth hormone than natural salmon. This genetically engineered species, or AquAdvantage salmon, will be capable of growing to its full size in 18 months, instead of the usual three years it takes non-GMO salmon to grow.

Will not be labeled as a GMO

Consumers will be left in the dark. The genetically modified Atlantic salmon will not be labeled as a GMO food product.

The Center for Food Safety, which is filing a lawsuit against the FDA, had this to say about genetically modifying salmon:

“Imagine a world where GE salmon take over our oceans, rivers, and streams. These fast-growing manufactured fish would outcompete and wipeout our treasured native salmon. Salmon fishing communities would be devastated and our marine environment would be forever altered. With today’s FDA approval, this scenario could soon be a reality.”

Executive director of Center for Food Safety, Andrew Kimbrell said, “The fallout from this decision will have enormous impact on the environment. Center for Food Safety has no choice but to file suit to stop the introduction of this dangerous contaminant. The FDA has neglected its responsibility to protect the public.”

Food & Water Watch is one of the plaintiffs in the coalition suing the FDA. The non-governmental organization and consumer rights group, which focuses on corporate and government accountability relating to food, water, and fishing, said “this marks the first time any government in the world has approved a GE animal for commercial sale and consumption.”

Senior attorney for Center for Food Safety and co-counsel for the plaintiffs, George Kimbrell said the following:

“FDA’s decision is as unlawful as it is irresponsible. This case is about protecting our fisheries and ocean ecosystems from the foreseeable harms of the first-ever GE fish, harms FDA refused to even consider, let alone prevent. But it’s also about the future of our food: FDA should not, and cannot, responsibly regulate this GE animal, nor any future GE animals, by treating them as drugs under a 1938 law.”

The plaintiffs also claim the FDA also failed to consider the risk that genetically engineered Atlantic salmon could escape and threaten the natural salmon population.

Food & Water Watch also refers to AquaBounty’s poor environmental record and concerns that this record “greatly raises the stakes for an environmentally damaging escape of GMO salmon.” GMO salmon have the ability to breed with other types of fish, and Canadian researchers found that they enthusiastically do so. Food & Water Watch claims that the FDA has not taken into consideration what could happen if GMO salmon breed with other salmon or other types of fish.

When genetically engineered salmon escape, or are accidentally released into the environment, the new species could threaten wild populations by mating with endangered salmon species. The GMO salmon can also outcompete the endangered species for scarce resources and habitat, and/or introduce new diseases. Studies have shown that there’s an increased risk for genetically engineered organisms to escape into the natural environment, where GE salmon can crossbreed with native fish.

Transgenic contamination has become quite common in genetically engineered plants. For more than ten years, contamination occurrences have cost U.S. farmers billions of dollars. It could be more damaging in wild organisms like fish.

Food & Water Watch says the world’s preeminent experts on genetically engineered fish and risk assessment — as well as biologists at U.S. wildlife agencies charged with protecting fish and wildlife — heavily criticized the FDA decision for failing to evaluate these impacts.

In the agency’s final approval, the FDA ignored their concerns.

Atlantic salmon is an endangered species

Atlantic salmon were once a luxury food — reserved for special occasions like Christmas and New Year’s Eve. Eventually salmon become available in supermarkets across the country at reasonable prices, and in large quantities, year-round.

However, due to a variety of reasons — including disturbances of migration routes, aquaculture habitat deterioration, pollution, environmental changes, and overfishing — stocks of wild Atlantic salmon have been reduced to extremely low levels.

Currently, U.S. Atlantic salmon — as well as many other populations of Pacific salmon — are protected by the Endangered Species Act. They are in danger of extinction.

In North America, the Baltic, and Europe, the wild Atlantic salmon species has been over-exploited since the 19th century and in many regions, Atlantic salmon have completely disappeared.

Dana Perls, a food and technology campaigner for Friends of the Earth said, “It’s clear that the market has rejected GE salmon despite FDA’s reckless approval. Major retailers including Costco, Safeway, and Kroger won’t sell it and polls show the vast majority of people don’t want to eat it. Yet under this approval it won’t be labeled, violating our fundamental right to know what we are feeding our families.”

For consumers, there are ways to avoid GMO salmon in the grocery store. According to the Campaign for GE Seafood, nearly 60 major food retailers have taken the pledge to avoid selling GMO salmon. They’ve created a handy infographic indicating which ones.

Additionally, Food & Water Watch has a petition to President Obama to stop GMO salmon. The group is asking the president to revoke the FDA’s approval of genetically modified salmon, including the Atlantic salmon.