The arm wrestling monk: A basic introduction to Qi for the acupuncture patient 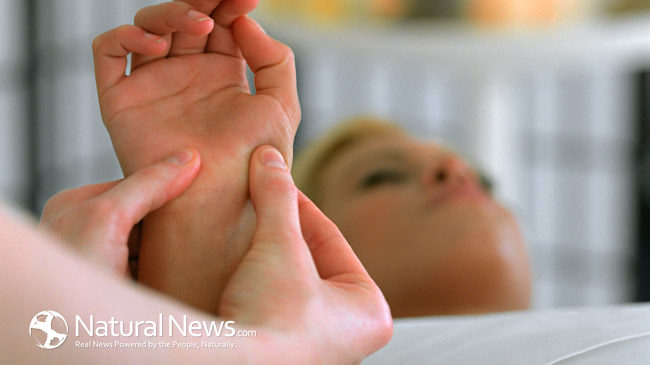 One summer I lived with a Tibetan Lama who beat me at arm wrestling.  While I was living with my friend Ben, training for the upcoming college soccer season, Lama Lobsong was on a teaching trip and also being hosted by my buddy’s mother.  Lama slept in the room at the end of the hall and spent his time meditating and reading sutras at the kitchen table.  I was doing carpentry work during the day, playing soccer, running, and lifting weights.  While I worked on my body, Lama worked on his mind.

One afternoon Ben and I returned to the house after working out and, unsurprisingly, headed straight to the kitchen where Lama was studying.  He asked what we had been up to and we explained that we had been at a gym. We did not share all the same words but apparently flexing your biceps is a universal sign for pumping iron .  He laughed and with a huge grin put his arm up on the table, readying himself for the first challenger.  Lama is a decent sized guy but his arms looked soft and gentle.  He beat Ben quickly, with a laugh and a smile.  I stepped up and was beaten in seconds.  Lama challenged us both to go against him at once; we could not move his arm an inch.  Another of Lama’s feats was his ability to eat tablespoons of hot sauce that would take the skin off your hands, without so much as a bead of sweat on his forehead.  The man was a master of qi.

Lama gave me my first experiential lessons in understanding qi, the basis of Chinese Medicine.  Working with patients, the question “what is qi?” arises continually and, in a way, I think that helping my patients understand qi is one of the most useful things to help them move towards a higher standard of wellness.

One of my teachers, Ken Rose, saw understanding qi as the most essential task of any practitioner of Chinese Medicine and he breaks it into five concepts which help translate the multidimensional character qi.*  Qi is the material that connects all things in the natural world, the catalyst behind all change, the force driving all movement, the language (communication) spoken by all forms of matter and therhythm by which life proceeds. Qi is the substance that enables life.  It flows through our bodies, orchestrating the birth and death of each and every cell, the evolution of every thought, and the eruption of every emotion.  Qi is our connection to one another and to the natural world.  There is only one qi and it is shared by all.  Qi is poetic yet wholly material.

In treatment, qi is the essential ingredient.  Within our bodies there are 14 main channels arranged as a bilaterally symmetric system, each channel associated with an organ or group of body functions.  It is on these meridians that we locate acupuncture points and, by stimulating these points with needles or moxibustion, influence the qi.  For many patients, observing qi sensations during treatments or the changes felt following treatment begins their experiential education in qi.

Mindfulness practices like Qi Gong, yoga or meditation can also offer an experiential knowledge of qi and improve our well being.  Developing awareness of qi and understanding how our bodies collect and use it enables us to shift our perspective on health from a paradigm which attempts to repair illness to one that maintains wellness.  Understanding qi empowers us to influence our own health.

There are three main factors which influence our body’s ability to cultivate and utilize qi: constitution or “pre-heaven essence” (Jing) is like your genetic make-up and is based on the vitality of your parents at the moment of conception.  Diet and respiration (Zong Qi) are two forms of qi derived from the food you eat and the air you breathe. Practice (Qi Gong) is cultivating qi with mindful focus, conscious breathing and awareness of body (posture or movement).  For me, Qi Gong has a broad definition which can include walking in nature, yoga, meditation, martial arts, surfing, running, biking, skiing, cooking, drawing, making music…. Your entire life can become practice if you bring mindful awareness into every moment.  Not an easy task but this is basically what monks like Lama Lobsong strive for: living with awareness.

Importantly, the latter two of these factors are largely within your control.  Qi is all around us but the body needs to transform qi into a form that is usable.  Think of it like digestion; rice does not flow through your veins to feed your cells.  Just as the body must first break food down into its essential nutrients in order to nourish the body, your body must also make qi accessible.

While constitution, diet, respiration, and mindful practice influence your ability to collect and transform qi into a usable material, acupuncture can benefit how your body uses this qi as well as the process of collection and transformation of qi.  By reading the 12 different pulses on each of your wrists a practitioner can assess the way in which qi is moving through your body, how your body is utilizing qi, and even potentially what is disturbing your body’s flow of qi.  By combining a qi-cultivating lifestyle with regular acupuncture treatment, an abundance of qi can flow through the body and enable optimal functioning.

There is a saying, “where the mind goes, qi follows.”  When Lama Lobsong beat me at arm wrestling it was with his mind, a mental focus so strong that he could direct qi.  By living a balanced lifestyle and cultivating your mind-body connection through practice and the support of acupuncture you can begin to take control of your well being.  Turn your mind toward health and qi will follow.

“The Fundamental Question: What is Qi?”, Qi: The Journal of Traditional Eastern Health & Fitness