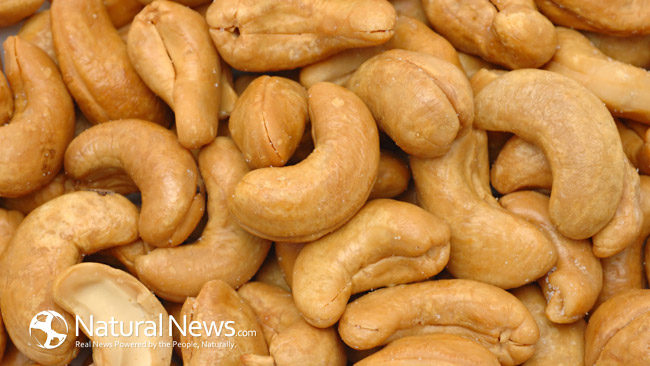 Typically, a jar of mixed nuts contains peanuts, almonds, Brazil nuts and of course, cashews. In stores, they’re often sold nestled next to other nuts. They’re in containers labeled “nuts,” are sold in the nut section of most stores and for crying out loud, are even sold on nuts.com. Yet, (cue up the suspenseful music), they may not really be nuts after all. Well, sort of. Maybe. Or perhaps the “it’s a long story” statement works best in this case. In any event, the cashew takes its place in the “what category do I belong” debate, like many other foods that have been there too (i.e. tomato as a vegetable/fruit/berry).

For those who can’t take the suspense, the cashew that we commonly refer to as a nut and eat, is technically a kernel (seed). Which comes from inside a nut, which is attached to the outside of a fruit. Therefore, the confusion and debates are understandable. It’s a bit reminiscent of those small, painted wooden dolls where smaller and yet even smaller ones are stacked inside each other. Here’s the story, er, in a nutshell.

Cashews are native to Brazil and widely produced in India and parts of Africa. They come from a cashew tree, which is an evergreen. These particular trees produce fruits, called cashew apples. A crescent-shaped protrusion is attached to the outside of the cashew apple, where the nut exists. That nut contains a seed, or kernel, which rests inside a shell. After the kernel is extracted from its shell, voila! The result is the cashew as we know it, the one we commonly eat and refer to as a nut.

Many may say that the cashew is a fruit because it was attached to one, once existing as a single entity. Others hear the “apple” element and understandably, yet incorrectly, make the correlation that the part we commonly eat is actually a fruit, like apples. One popular children’s video:

…is on board with educating others about the cashew conundrum, its catchy, “did you know that cashews come from a fruit” lyrics intriguing people immensely. The song’s statement gets us thinking and sets us on our journey to delve deeper.

It has folks Googling: Are Cashews Nuts or Fruits?

Others say it should be referred to as a nut, if for no other reason than that it is housed inside of one. Others suggest that since the nut is plucked from the fruit, the detachment renders it an entirely new item, a nut.

However, evidence would seem to show that it is indeed simply the edible content of what exists inside the nut that matters. Therefore, what we are eating is a tan-colored, healthy kernel which has been extracted from its shell (which is found inside the nut).

The cashew apple, for those interested, is typically used to make jams.

We turned to The World’s Healthiest Foods web site for some information. It lists top healthiest foods by category including vegetables (no cashews there), fruits (no, not there either) and a nuts/seeds/oils category (yes! cashews are listed in that section). Still, nut or seed?

Many sites point in the “seed,” or kernel, direction. According the well-recognized United States Department of Agriculture (USDA), the cashew is classified in the group, “dicot.” This term means it comes from a flowering plant with two embryonic seed leaves. Without getting into serious botanical lessons, edible dicots, such as cashews, have seeds with two distinct halves.

The bottom line seems to be then, that a cashew nut is just that: a nut. But the part we eat is actually a kernel (hulled) that happened to be housed inside the nut.

Terminology aside, cashews are very healthy for us.

High in dietary fiber and numerous vitamins and minerals, including phyto-chemicals, cashews have been known to offer protection from a range of diseases, including cancers.

Cashews have Selenium, a very important micronutrient that assists other antioxidant enzymes. For example, selenium works with Glutathione peroxidases, known to be one of the body’s most powerful antioxidants.

Although it’s only a small amount, cashews contain zea-xanthin, a flavonoid antioxidant that plays an absorption role in eye function. In particular, a commonly-held belief is that cashews provide helpful filters from harmful rays, healing to prevent age-related macular degeneration in elderly people.