15 Quotes Explaining where the U.S Economy and Markets are Headed 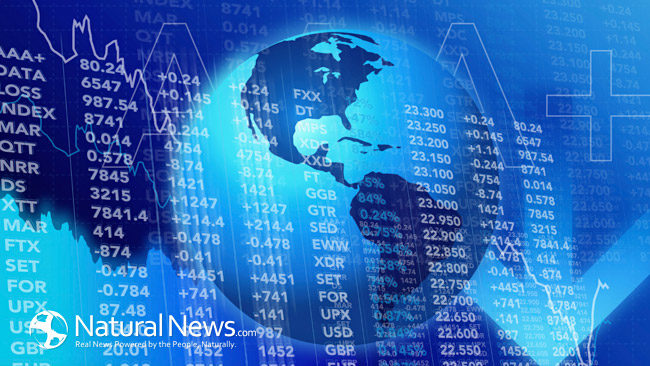 In the light of the current financial rout which has been sweeping equity markets it seems like we may be coming to a new level of awareness and shift in the global economy. Despite White House Press Secretary Josh Earnest defending the U.S economy as strong and resilient after almost almost $2 trillion was wiped from investors, the reality is rooted in a flawed concept and belief that markets can grow forever. The world’s biggest Ponzi scheme which has been artificially inflated for much of the past decade may well be the turning point for Western society. This could be the wake up call that is sorely needed as central banks keep trying to kick the can down the road and keep the overly inflated financial markets and systemic failures of the system going. While the mainstream media pretend this is a “blip” on the economic radar and mainstream ‘financial lap dogs’ continue to  placate the market and investors in the vague hope things will return to normal, there are many who aren’t so optimistic about the future of equity markets and economies.

Peter Schiff  is CEO and chief global strategist for Euro Pacific Capital Inc. and is one of a few which predicted the global financial crisis prior to 2007. Often the mainstream pundits poke fun at Schiff for his views which aren’t inline with the mainstream party line. On the 18th of August 2007 Schiff appeared on Fox business, effectively heckled by various so-called financial ‘experts’ who suggested sub prime wasn’t a problem. Schiff stuck by his research and understanding of the fundamentals.

“This is just getting started, it’s not just sub-prime, this is a problem for the entire mortgage industry. It’s not just people with bad credit, it’s not just people with mortgages they can’t afford, it is not just people who will see their home equity vanish and it’s not limited to mortgage credit. Americans are going to have a difficult time to borrow to buy cars, to buy furniture to buy appliances. Foreigners around the world have been lending us money for years they are now finding we can’t afford to repay, this is going to be an enormous credit crunch , the party is over for the United States, we cannot continue to keep borrowing to live beyond our means and consumer foreign products.”(1)

More recently Schiff has been outspoken regarding many of the policies of the Federal reserve.   His current views give an insight into what is really going on outside the mainstream cheerleaders who promote mantras of corporate and political  interests as well as those of Wall Street.

“We are resuming the financial crisis the Federal Reserve interrupted and were doing it in a deeper hole, because we spent the last seven years digging.  Instead of getting out of it we have dug it deeper, thanks to the Fed but they are never going to admit that.”

“I think the stock market will surrender all of its ill-gotten Fed gains from the lows of 2009, if the Fed were to actually do what it is pretending it can do we will go all the way back down to the lows of Mach 2009. Because none of those gains were real, it wasn’t because the economy improved, it wasn’t because we became more productive, it wasn’t because of a genuine increase in corporate earnings, it was all about ‘Fed engineering’. It was quantitative easing and zero percent interest rates. Those were the two props the Fed used to artificially prop up the market.”

“What the Fed should have done was allowed the markets to solve the problems they caused. The problems that led to the 2008 financial crisis, they didn’t do that, so here we are. We have more debt than ever before, so when you raise interest rates you expose the problem, and now that the problems are much bigger it’s a much smaller rate of increase in interest rates is all it takes to expose those problems. “

On the Fed Raising Interest Rates

Schiff believes that the U.S economy is poor shape and it is unlikely the Fed will increase interest rates. He believes that they will most likely partake in another quantitative easing policy.

“The U.S will have to keep interest rates at zero indefinitely,  QE isn’t over, were just warming up, it is a never-ending program, were going to have more QE’s than Rocky movies and of course those movies got progressively worse as they kept coming out with sequels,  so that QE 4 will do more damage to the underlying economy and more reasons to get out of Dodge.”

Schiff uses an anecdote from one of the Seinfeld episodes where George (who loves to make himself feel important and impress) tells his in-laws that he has a house in the Hamptons. The in laws know that George doesn’t have a house in the Hamptons and can’t bring themselves to mention his is lying, so they play along.  George can’t admit his embellishment so everyone goes along for the ride and continues to tell tales of his make-believe home with horses, solariums etc.

“George Costanza is like Janet Yellen, his in laws in the back seat are the markets. The rate hike is like that Hampton Beach house, and everybody knows that they can’t ever get to that beach house. That’s why the Fed can’t define what the data is that they are depending on. There is no way they can raise rates, just like George doesn’t have that beach house. The Fed can talk about they can pretend to buy gifts, and talk about the horses and all that, but there is nothing there at the end of the journey., there is no beach house. Like the end of this six / seven year journey, there can’t be a rate hike. If the Fed is that dumb to raise rates given the box they are in, it would be idiocy for the Fed to raise rates. Beacuase if they raise rates they look like bigger idiots, then if they never raised them. If they raise rates and then have to cut them back to zero they look like complete fools.” (2)

American businessman, investor and author who co-founded the Quantum fund with George Soros is also sceptical about any recovery in the global equity markets and in particular the U.S.

“Unemployment in America is higher now than is was before 2008. This hasn’t solved any problems, they are printing a lot of money, Obama is spending a lot of money and the people who are getting all this money think this is great, overall the situation is deteriorating more and more and more. ”

“The world is in the process of changing, the financial sector has had it 30 years, now it is going to be people who produce real goods.” (3)

Marc Faber is another critic of the current regime who is publisher of the Gloom Boom & Doom Report newsletter as well as being an being director and investment advisor at Marc Faber Ltd.

“Contrary to what many observers, strategists and economists, I don’t believe the global economy is healing, I believe the global economy is heading into a slump once again. We have a slowdown everywhere and if you take out the fudging of statistics, the economy for the median household everywhere in the world is not doing particularly well. If the global economy was doing so fantastically well, why would it be that commodities have collapsed to the extent they have declined, how would it be that the currencies of emerging markets and some of them have declined by as much as 50% against the U.S dollar in the last three years.”

“Preceeding every bubble you have a huge expansion of credit, that was the case for the period 1997 to 2000, and the period 2003 to 2007 and in previous occasions in economic history. In the case of China credit as a percent of the economy has grown by more than 50% over the last five years which is essentially a world record. In my view the economy is slowing down rapidly. One of my friends has a car dealership, a luxury car dealership in China he said sales have hit a brick wall, not a slowdown, a brick wall. This will spill over into other countries as China is a large buyer of commodities and large trading partner with other countries.”

“Everywhere people are faced with rising costs of living and essentially declining currencies, so purchasing power goes down. “

“There is a coordinated effort by central banks to essentially print money, it is like a relay race the baton is passed form one central bank to another and they all talk to each other every day, one does this for a while, the U.S print money, they go to the ECB they go to the China and so forth. The Whole thing is not going to work.”

“Who knows maybe the Fed was talking to the People’s Bank of China and said, why don’t you ease massively, that gives us a reason to not to increase interest rates.” (4)

Is the publisher of the Trends Journal,  business consultant and author who has been tracking global trends for the better part of thirty odd years.

“This is a global meltdown, commodity prices are crashing, it is not a one off. Currency prices, commodity prices, we are seeing it in the numbers, this is not about China or the markets, it is bigger than that, it is all of this Ponzi scheme to pump up the markets that created trillions, several trillions of dollars worth of merger and acquisition activity and now we are on track up until this happened to beat the high mark of 2007. All of the stock buy backs which are 90% of the cash, went to buy back stocks did nothing to boost economies and now we are seeing the reality of it.” (5)

Whether you are pessimist or an optimist it doesn’t matter. The reality is there is significant debt burdens globally and structural weaknesses prevail throughout the global economy.  As Jim Rogers suggests we need to move the focus from the financial system to producing real goods and services. The financial system has effectively been soaking up resources and capital, adding little or no value to the underlying economy. Maybe it is time to rethink the way we do things, what we value and how we will move forward.

Article by Andrew Martin, author of  Rethink…Your world, Your future. and One ~ A Survival Guide for the Future…

(2) Peter Schiff Radio Show Episode 105, The Fed to the Rescue