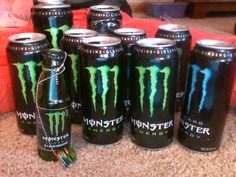 A few ingredients in Monster Energy Drink (This does not include the synthetic manufactured vitamins and caffeine derivatives that are also in it.)

Also, aside from the fact that the slogan is “unleash the beast”, if you haven’t heard this before, look at Hebrew lettering for 6, the logo spells out 666. Coincidence?  Or immoral?

Fructose elevates uric acid, which decreases nitric oxide, raises angiotensin, and causes your smooth muscle cells to contract, thereby raising your blood pressure and potentially damaging your kidneys. Leads to insulin resistance, which is not only an underlying factor of type 2 diabetes and heart disease, but also many cancers.

Refined sugar tricks your body into gaining weight by fooling your metabolism, as it turns off your body’s appetite-control system. It does not appropriately stimulate insulin, which in turn does not suppress ghrelin (the “hunger hormone”) and doesn’t stimulate leptin (the “satiety hormone”), which together result in your eating more and developing insulin resistance.

The cells of many human cancers come to depend on insulin to provide the fuel (blood sugar) and materials they need to grow and multiply. Insulin and insulin-like growth factor (and related growth factors) also provide the signal, in effect, to do it. The more insulin, the better they do.

Some cancers develop mutations that serve the purpose of increasing the influence of insulin on the cell; others take advantage of the elevated insulin levels that are common to metabolic syndrome, obesity and type 2 diabetes Some do both.

Many pre-cancerous cells would never acquire the mutations that turn them into malignant tumors if they weren’t being driven by insulin to take up more and more blood sugar and metabolize it.

Sucrose is reported to be capable of producing dermatoses in bakers, candy makers, and related occupations. It is well established that uncontrolled glucose concentrates in maternal blood are associated with elevated embryonic and fetal death and increased neonatal morbidity and mortality.

Millions of babies all over the world were eating baby foods containing large amounts of MSG and hydroloyzed vegetable protein (a compound which contains three excitotoxins).

Slightly hazardous in case of skin contact (irritant), of ingestion, of inhalation.

May cause adverse reproductive effects and birth defects (teratogenic) based on animal test data. May affect genetic material (mutagenic)

The toxicological properties of this substance have not been fully investigated. (But, still put in food)

Personal Protection: Safety glasses. Lab coat. Dust respirator. Be sure to use an approved/certified respirator or equivalent. Gloves.

Taurine is not listed as a GRAS substance by the FDA. Under the Dietary Supplement Health and Education Act of 1994, the manufacturer is responsible for ensuring that a dietary supplement/ingredient is safe before being placed on the market

The main action of Taurine in the body is to conjugate cholesterol into bile acids so that they can be removed from the body. Several studies in animals and humans have indicated that taurine supplementation can reduce serum LDL (“bad”) cholesterol caused by high-cholesterol diets (Wócjik et al., 334 2010).

While not all energy drinks contain Taurine, it is one of the “central” ingredients in many energy drink products. Taurine is found in high concentrations in 25 animal protein such as seafood, beef, and chicken

Much of the taurine used in food and pharmaceuticals is created by commercial chemical processes and thus is synthetic. Commercially available taurine is produced synthetically by the reaction of Ethylene Oxide with aqueous sodium bisulfate or the reaction of Aziridine with sulfurous acid

Aziridine (also known as ethyleneimine) is flammable and reactive; it may polymerize violently when exposed to high temperatures or sunlight

Taurine can be extracted from animal sources, mainly ox or cattle bile (BBA, 2011; New Zealand Pharmaceuticals, 2007). However, it appears that only small amounts of naturally produced taurine are available.

Acesulfame Potassium may be safely used as a general-purpose sweetener and flavor enhancer in foods generally It is the potassium salt of 6-methyl-1,2,3-oxathiazine-4(3H )-one-2,2-dioxide. Contains Fluoride and Lead.

Acesulfame-K may contribute to hypoglemica. People suffering from diabetes might think this compound is best for their taste buds but excess usage of this compound may stimulate the release of insulin and result in hypoglycemia.

Mental confusion, liver and kidney problems, headaches, depression, nausea, dizziness, visual disturbances, etc. are some of its other side effects.

In the production of Acesulfame K, Methylene Chloride – a carcinogenic compound, is used. Long term exposure to Methylene Chloride: nausea, headaches, mood problems, impairment of the liver and kidneys, problems with eyesight and possibly lung and breast cancer

The 1970s tests of Acesulfame—two tests carried out in rats and one in mice—are inadequate to establish lack of potential carcinogenicity. Here are a few reasons why the tests are inadequate

Ingestion: Prolonged or repeated ingestion may affect the liver (liver degeneration)and kidneys (nephropathy), and may cause weight loss.