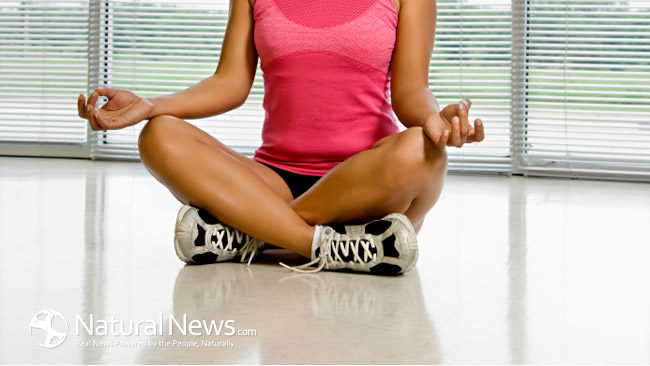 I tossed around the idea of publishing this article for quite some time for fear of judgment from my teachers and fellow yoga school students. Considering that a major principle of yoga is non-judgment, and realizing that I’m part of the most supportive and loving community I know, I’m not too concerned about this anymore. I decided to publish this article so that those struggling with anxiety might be encouraged to try yoga. I have also decided to publish this article in the hopes that students who have experienced this place in their practice would know that they aren’t alone. This is also for those who have been in this place but didn’t know how to define it.

I have been practicing Bikram Yoga for four years. Bikram Yoga is a sequence of 26 postures and 2 breathing exercises, practiced in a 105 degree room and 40 percent humidity for 90 minutes. I began this practice as a depressed 13 year old, and this yoga has changed my life. Because this yoga practice has saved me from depression, I want to sustain it. So, when I reached this place in my life where anxiety became the highlight (which is very new to me) it was terrifying.

The sheer force of that fear made me initially title this article “When the Joy Escapes the Practice,” but like my anxiety, my practice, and my life, this article too has grown and become a homage to a terrible event that gave me back something I thought I’d lost.

On April 23rd, I was in a car accident that changed my world. I totaled my car. The front of my car was completely destroyed. Both airbags inflated (and saved my life), the windshield was smashed, the doors were jammed. This is the car that I used to drive to get to the studio I practice at, to college, to work, to everywhere. I grew attached to this car, so losing it was like losing a part of me – the security and familiarity it represented.

The day after the car accident, I first experienced the shock of simply not having my car. Knowing the healing power of yoga, there was nowhere I wanted to be more than back in the hot room doing whatever my body and mind would allow post accident. I just needed to move. I asked my sister to drive me, and she lovingly did. From there, in class, I experienced the shock of a swollen arm that lacked the mobility it had the day before, and my knees that suddenly lacked the ability to lock out in Standing Head to Knee pose. Physically I was in pain. I thought, “OK, no car, physical pain, I can handle this. Mom can drive me, God willing, and the mobility will come back.” Little did I know the mental battle that would follow.

About a week after my accident I would try to drive. Sweaty palms gripped tightly onto the steering wheel, tears streaming down my face, and not being able to drive more than 50 miles per hour on the freeway would become my private, daily battle for my hour-long drive to the yoga studio. But I had to be there.

Later I would go on a trip to Wyoming to compete at the USA Yoga National Asana Championships. I did not have to drive for the week that I was there. When I returned home to California, I would set my alarm each morning for 7 AM to get up and leave for yoga class. For six days straight, I could not go to yoga. One day I even got up and walked to the car, but I could not get in.

I told myself, my family, my fellow students and teachers that I was taking a break. Being immersed in the yoga for a week in Wyoming was a lot, I said. Training for the competition was a lot. It was physically and mentally draining and I’m feeling burnt out in my yoga, I said. My joy has temporarily escaped my practice, I said.

Day seven came and I forced myself into the car to go to my yoga class. A one hour, sweaty palmed, teary eyed, overly-cautious drive is all it took for me to get to my happy place, my home. I had a fantastic class. It felt so good to be back. The joy was all there. This healing yoga was still healing as it had been when I left for Wyoming, and I smiled from the start to the end of my class.

I resumed my practice, but not daily, as I could not stomach getting into the car. I would go to the studio three to five days a week now. Following my car accident, I was warned by friends who had been in an accident about Post-traumatic Stress Disorder. I brushed it off and told myself I would bounce back quickly, that this couldn’t happen to me.

I was taking a class with one of my favorite teachers, Yasuyo (I just discovered her class and fell in love with her teaching style; her dialogue is like a song and she teaches with such joy). We were in Standing Bow posture and I suddenly got images from my car accident. One after another after another, each one pounding harder than the last. I even smelled the smell of coolant, which had leaked from my car upon impact. My arm felt swollen and my knees weak all over again. It was mentally excruciating. It was physically exhausting. The next posture was Balancing Stick and I told myself I had to keep moving with Yasuyo’s song because it would be more painful to stop than to keep moving.

The dialogue says that Balancing Stick pose is like a human tug-of-war. The idea is that one part of your physical body stretches away from the opposite side of your physical body. But this posture was more than that for me in that moment, and I remember it vividly. It was not just my physical body stretching in opposite directions, it was the part of my mind that wanted to stay present in this posture and the part of my mind that wanted to flashback to the trauma of the car accident. And I would fight it.

After class I spoke with owner of Bikram Yoga San Jose, Michele Vennard about what I experienced in class. I was terribly embarrassed to say anything at all, and I was angry at myself because here I was, bringing another goddamned mental problem into the hot room. But the reality is that there will always be ups and downs, and the hot room is the perfect place to take your problems and learn from them. Michele reminded me of this and that my feelings were valid and normal. This is where I learned that, the joy never left my practice. It was easier for me to tell you that I was feeling burnt out about yoga than to tell you that I’m scared to drive to yoga.

I have decided to start seeing a therapist, which was long overdue. I have learned quite a few truths from this, which I’d like to share. I spoke with my coach and owner of Bikram Yoga Mountain View Cynthia Wehr about my new relationship with driving leading to a new relationship with my yoga. She reminded me that it is OK to take my time, and that I do not need to prove anything to anyone.

I won’t be embarrassed over my mental battles, and I have chosen to be transparent about them. Selfishly, because, when you release your struggles, you release their power over you. And lovingly, because, I hope that my insights might inspire you to understand, accept, embrace, release, and to share your own story. My father, my biggest fan, my greatest hero told me “When the going gets tough, the tough get going.” I can do this, and so can you. We’re fighters.

“Life seems sometimes like nothing more than a series of losses, from beginning to end. That’s the given. How you respond to those losses, what you make of what’s left, that’s the part you have to make up as you go.”
― Katharine Weber, The Music Lesson

Robin Fox is a 17 year psychology major residing in California. She is an active volunteer with the American Foundation for Suicide Prevention and is going to school to become a clinical psychologist. Robin enjoys Bikram Yoga, which she began practicing at the age of 13. In her free time she enjoys running, reading, , writing, and all things outdoors. She is an ambassador for One Tribe Apparel. "One Tribe Apparel was created to bring bohemian apparel from around the world back to the west and to capture the serendipitous magic that happens when travelers meet as friends and part ways as family." http://www.onetribeapparel.com/