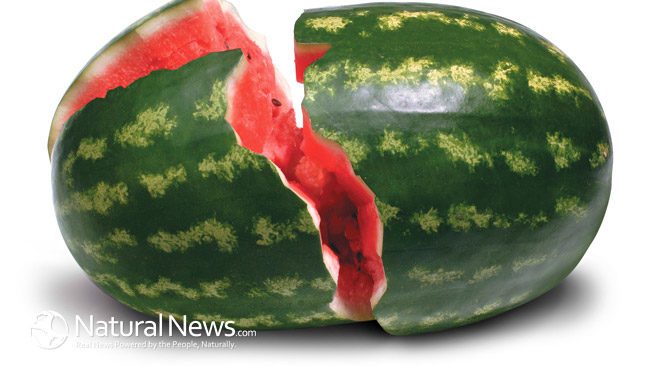 As I stood by an Amish farm stand in Pennsylvania, I found my thoughts going back to when I was a child eating watermelon in my grandparents big city backyard.
“Grandma, what do I do with the pits?” I then presented a fist full of pits in my left hand as I held a slice of watermelon in the other.
“Toss the seeds in the garden on the pile of coffee grinds,” Grandma directed as she pointed to the small compost pile she had that was mostly comprised of egg shells and coffee grinds.

Then some years later the pits magically disappeared from watermelon. I was older then and at first I thought this was fantastic! Today I miss the pits and not because of memories, but because of my need to know why…

Seedless fruit possess no mature seeds and consumption is more enjoyable, thus you have a product that is more commercially valuable than fruit with seeds. Today we have seedless watermelons, tomatoes, grapes, oranges, lemons, limes, and bananas just to sell more of a product and increase profits. Were these steps necessary? I think not, because watermelon is my favorite fruit. I would have purchased no less over the years if the seeds remained.Yet, the situation grows… Just perhaps, because of the success with seedless fruits we now have an onslaught of Genetically Modified (GM) foods. Now this is a concern I have because all the facts are not in and long term research is obscured at best. Also our current government administration has failed us by no longer backing Label laws that would help guide us when purchasing our food. Additionally, reports have been presented showing concerns between GM foods and issues with bees and insects. Bees pollinate and GM seeds with pesticides built in “may” be creating super bugs.

Nevertheless, we must feed the masses and the “only way” we are told (or sold) this can be done is through GM foods. That is why they are working hard in the lab to have corn stalks produce two or three ears of corn per stalk instead of the natural God given one. Only way? Sorry, there is always another way!

How about more people start to have their own gardens. Let them be in an unused field, backyard, rooftop or window sills. What is wrong with people helping to feed themselves and others? Lower profits, that’s what is wrong.

So what do “We the People” receive from companies that put money first and people last?

– To kill insects that consume our crops we have added genetically modified proteins to perforate cell membranes of insects. Can these insect killing proteins harm us when we eat the food? Consequences to these actions are really unknown. The majority of studies are done over 90 days and this short time span can not adequately evaluate chronic toxicity!- Genetically Modified corn and soy has shown serious concerns in some studies for liver and kidney problems after consumption.

– Lacking seeds means there is no capacity to propagate from the fruit, so man has to propagate by “vegetatively” with cuttings or grafting. Bananas are done this way and are genetically identical clones.

There are known disadvantages with seedless crops. A decrease in genetic diversity occurs for the species. So a disease or insect that attacks one version can be capable of affecting each clone of that version. One example now being used is from bananas. A vast majority of commercially produced bananas are from a single source called the Cavendish cultivar. These plants are now being attacked worldwide by a new fungal disease. All the cloned Cavendish cultivar are highly susceptible and mankind doesn’t have anything to stop this attack.

So there I stood by the Amish farm stand looking at watermelons and I asked, “Do your watermelons have the big seeds in them?”
“Yes, they have seeds,” was the answer I received with a smile that seemed to say why won’t they have seeds.
“Can you sell me some of your watermelon seeds?”
The young lady smiled, turned around and looked at her little sister who then reached behind a basket. She came up to me and handed me a fist full of watermelon pits. There was no charge. I smiled and thank them.
I will be growing my own watermelons with seeds in my backyard from now on. My grandma would be proud.