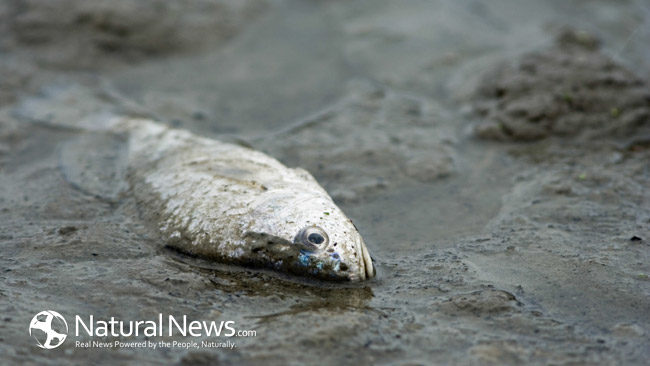 Canadian fishermen off the coast of Langara Island in British Columbia say they are seeing “waist-high” debris from Fukushima, Japan, that goes on for up to 15 miles floating in the Pacific Ocean. They are concerned that some of this detritus may be radioactive or contaminated by toxic waste as a result of the now-infamous meltdown of the Fukushima-Daiichi power plant in 2011.

Piles of debris seen in the Pacific today, it is believed, originated in Fukushima after a 50-foot-high tsunami struck the town and nearby nuclear plant, resulting in massive flooding, destruction and partial meltdowns in three of the plant’s four reactors.

The problem is, no one knows just how much radioactive material has dumped into the sea around Fukushima following the disaster, as the Japanese government and the Tokyo Electric Power Company have been accused of covering up the fallout.

As early as September 2011, the Telegraph newspaper reported that Japanese scientists from the Meteorological Research Institute and the Central Research Institute of the Electric Power Industry claimed that 3,500 terabecquerels of cesium-137 were “released into the sea directly from the plant between March 11, when the earthquake and tsunami struck, and the end of May. Another 10,000 terabecquerels of cesium fell into the ocean after escaping from the reactors in the form of steam.”

A becquerel (Bq) is a standard measurement of radiation. One terabecquerel (TBq) is the equivalent of a trillion Bqs—a huge amount of this toxic waste.

A few years later, in August 2013, Reuters reported that scientists say highly radioactive water has periodically leaked into the sea at rates as high as 300 tons per day.

It is apparent that, already, seafood is being poisoned.

Environmentalists in Japan have tested samples of fish in Japan caught along the east coast and found that just under half of the products they purchased in grocery stores was contaminated with high levels of radioactive cesium-134 and cesium-137.

As for the United States, The San Francisco Chronicle reported on May 29, 2012 that scientists detected radioactivity in blue-fin tuna that have migrated into California waters from Japan.

The Chronicle reported: “The evidence is ‘unequivocal’ that the tuna—caught off San Diego a year ago—were contaminated with radiation from Japan’s nuclear disaster, the researchers said.”

In a recent video posted to Youtube by free-lance photographer Joe Vass, several fishermen were interviewed about the piles of debris that they believe have been coming from Fukushima. They are especially concerned that some of it may be toxic.

In the video, Vass, who conducted the interview with the fishermen, asked them: “I was wondering about Fukushima. You’re seeing that debris?”

One of the fishermen responded: “Oh yeah. Southwest of Langara [Island]—waist high, full of everything. It’s incredible, piles and piles. Drift nets up there with catastrophic death in them, it’s just horrifying. If you want to see incredible stuff, southwest of Langara . . . the drift nets have got everything in it dead . . . it’s bad, real bad—that all comes across from Fukushima. The currents are big, bringing everything in. We’ll see tide lines for 10-15 miles of just rows of [expletive deleted] floating.”

Vass then asked the fishermen, “Were you given any warning by the government that it could be radioactive or dangerous to your health?”

The man just responded somberly: “No.”

Chris DePaulo is a staff writer for Rabble Magazine, focusing on health, nutrition, lifestyles and the environment.