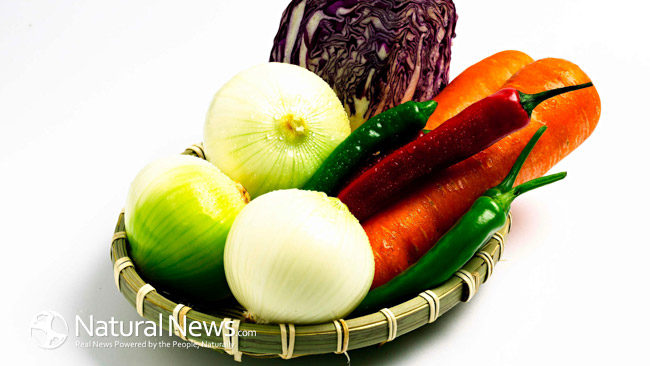 “Can consumption of raw vegetables decrease the count of sister chromatid exchange?”

Sister-chromatid exchanges (SCEs) occur when a chromosome is duplicated for cell replication and the two members of the pair exchange seemingly identical segments. While not necessarily harmful in itself, a high sister-chromatid exchange rate indicates a cell has been exposed to a mutagen. (2) SCE has become widely used to measure the mutagenic and carcinogenic properties of chemicals.

Across the three groups represented in this study – staff, cancer patients, and other patients – an increase in consumption of raw vegetables was associated with a decrease in the measured number of SCEs. The study did not find the same protective effect for cooked vegetables.

The cancer-fighting properties of vegetables are well-known and have been widely studied since the 1970s, when a lab confirmed the protective qualities of sulforaphane glucosinolate, a chemical abundant in broccoli, cabbage, and other members of the Brassicaceae family. (3) Research is ongoing on the “chemoprotection” broccoli and related vegetables offer.

A current study by Roswell Park Cancer Institute and the National Cancer Institute asks whether broccoli sprout extract prevents or slows the growth of breast cancer tumors, (4) and it’s just the latest in a series of studies on the medicinal properties of broccoli. (5)

Even so, “There’s no doubt in my mind that it’s ridiculous to think that one pill could do what a varied diet could do,” says Talalay, the lead researcher of the 1970s broccoli studies. (3) The 2015 study speculated on the identity of the protective chemicals present in consumed raw vegetables, naming vitamin A (carotenoids), vitamin C, and isothiocyanates (e.g. mustard oils), and concludes, “we think that the protective effect of raw vegetables is related to the content of all beneficial dietary nutrients.”

While fresh vegetables protect against cancer, they may also carry harmful chemicals. In particular, biphenyl, which is used to prevent the growth of mold and particularly used on citrus fruits during transportation, (6) has been found to significantly increase the frequency of SCEs. (7) Always remember to rinse fresh vegetables and fruits with clean water.