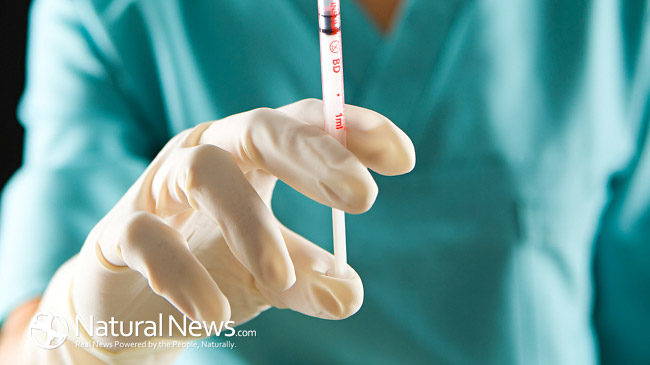 By “Greeners” I mean those who talk of “greening” vaccines by removing the overtly and obvious toxic preservatives and adjuncts from them. That’s their way of being politically correct or safe by not condemning all vaccinations, in my opinion.

Those epidemiological studies (widespread statistical surveys) have shown that bad health is more common among the vaccinated, who manage to survive without immediate serious vaccine injuries, than children not vaccinated.

But how and why has not come under controlled animal lab studies until Japan’s Kobe University animal lab study of 2009. And although those toxic additives are harmful, especially when injected to bypass a large part of our immune systems, it appears that totally green vaccinations will have a negative impact on health as well.

This study was reported and peer reviewed in the PLOS One Open Journal at the end of 2009. As expected, it has not received much if any public attention. It was brought to my attention in 2012 by homoeopathist and health writer Heidi Stevenson’s article on her Gaia Health blog. (Source linked below)

The Kobe  findings were echoed by one of my favorite doctors, retired neurosurgeon and author Dr. Russell Blaylock, an established campaigner against heavy metal and food additive neurological toxicity.

He expressed concern over the over-stimulation of young people’s immune systems with repeated antigen vaccinations, even without toxic additives. That video interview is also available in the sources below.

“Systemic autoimmunity appears to be the inevitable consequence of over-stimulating the host’s immune ‘system’ by repeated immunization with antigen, to the levels that surpass system’s self-organize criticality.” (Emphasis added.)

The initial purpose of this independently funded study was to understand how autoimmune diseases develop. It was not an effort to prove vaccination safety or danger.

The researchers used mice that were bred to avoid autoimmune diseases, in other words, tough mice. They were injected with solutions that contained antigens without toxic additives. Antigens generate antibodies to protect against invading disease pathogens.

Antibodies can turn against the host if they become overly and unnecessarily self generated, causing long term autoimmune diseases, such as asthma, food allergies, arthritis, MS, and a host of neurological disorders that plague us more than infectious diseases.

A vaccination injects cultured vaccine antigens of weakened (attenuated) or dead viruses to create an immune response of antibodies to that antigen, supposedly for creating immunity to that particular disease.

It’s not very unusual for cytokine storms (immune system overreactions) to overwhelm one who has been vaccinated. Vaccine adverse reactions have caused injuries of permanent disability, autism spectrum disorders, or death much more often than publicly disclosed.

They injected the mice repeatedly with antigens with just enough time between each injection to recover from each antigen reaction to study how an immune system could turn on itself to create autoimmune diseases. They were pushing the mice immune systems to see if and when they would no longer bend, but break. They used Staphylococcus entertoxin B (SEB) as their injected antigens.

Toxic adjuvants to boost antigen responses and preservatives such as mercury, aluminum, or formaldehyde used in vaccines normally were not part of the study. Antigens were used without the toxic additives normally used in vaccinations.

After seven injections the mice recovered each time with their immune systems intact. But after the eighth injection, problems with key immunity cells began arising.

Damaged cells were observed microscopically and showed signs of early autoimmunity. Their immune systems had started to self generate antibodies for autoimmune reactions after repeated antigen inoculations. (Study Source below)

This study should put to rest the notion that “greening” vaccines by removing or withholding vaccines’ normal toxic additives, would make the childhood vaccination schedule of close to 40 vaccinations by 18 months of age more agreeable. It is also a direct challenge to the practice of pushing vaccinations.

The Kobe animal trials demonstrated how autoimmune reactions were created as a consequence of repeated antigen only inoculations with long enough breaks between each injection to allow complete recoveries.

With the CDC’s vaccination schedule, human infants and children are usually not given “recovery time”. But according to the study, that wouldn’t matter long term anyway.

Autoimmune diseases have increased in quantity and variety as childhood vaccination schedules increased and more vaccines were made available for naive recipients.

Even infectious diseases that vaccines are supposed to immunize against have appeared among the vaccinated much more often than publicly admitted.

As a former vaccine developer disclosed to investigative reporter Jon Rappoport, … there is no such thing as a safe vaccine.” The very basis of creating immunity with even “greened” vaccinations is worse than false, it is actually very unhealthy.