The Toxicity Of Aluminum Adjuvant In Vaccines 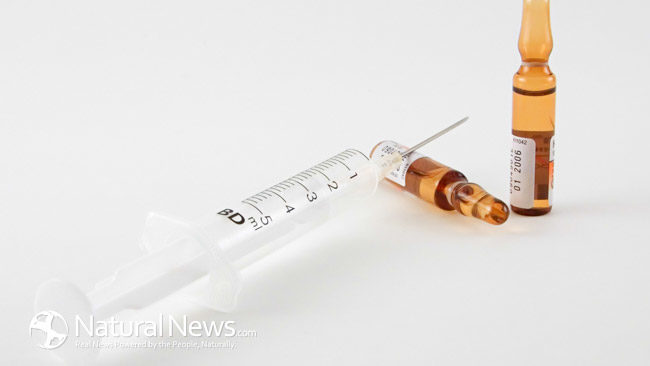 Last week I mentioned how the presumed ‘safe’ ingredient aluminum may be, or is, as toxic as ethylmercury used as a preservative in vaccines. Let’s explore this fascinating topic in a bit more detail shall we?

First of all, I’d like to clear up a few areas of discussion: aluminum is added to vaccines to induce a more robust immune response in the host being vaccinated. Aluminum is referred to as an adjuvant based on it’s immune stimulating properties. In fact, many vaccines need an adjuvant or they simply won’t work. Mercury (Thimerosal), on the other hand, is used to preserve the vaccine from contamination. Many vaccines contain both ingredients.

But here’s the strange part. Mercury (Hg) and aluminum (Al) share many of the same properties. Their toxicity profiles are amazingly similar. In fact, they are so similar that they can act in very small amounts synergistically. That is, they reinforce each others toxicity, at what would normally be considered very low, safe levels if we examined each separately. In this case one plus one might equal ten for example, rather than two on the toxicity Richter Scale. I have a term that I’ve coined, it’s called Dangerous and Deadly Dysergy or DADD for short. I call it dysergy since this ‘synergy’ is unhealthy and toxic.

This dysergy helps to explain why autism, for example, remains a plague in the US in spite of patients receiving less Thimerosal than two decades ago (actually, I’ll be writing an article showing how we are perhaps NOT receiving less Hg than before). But, that’s for another day.

I’ve spoken to the UK’s Dr Exley several times while writing my book. Dr Exley, a PhD chemist, is a world authority on aluminum toxicity. Let’s see what he has to say regarding this material. I’ll paraphrase some of this section for you: If we assume that we are exposed to a mere 1/10% of the global Al burden, then our exposure equates to thirty milligrams per DAY! Now, compare that to the 1950s when our exposure was a mere one milligram. It’s predicted to be 100 milligrams per day by 2050.[2]

Should we be concerned? You bet, according to numerous authorities. We know that vaccines are a source for Al but did you ever think that soy was a huge source for Al? Soy, a supposed health food is a big Al accumulator. Soy is also surprisingly high in several other dangerous materials:

“Soy naturally has very high aluminum levels, along with high levels of the excitotoxin glutamate. Not only that, but soy is also high in manganese and fluoride, both known neurotoxins.”[1]

Dr. Exley explains the five toxic attributes of Aluminum. From his publication, aluminum is a:

Pro-oxidant. Despite Al being described as ‘redox [oxidation/reduction chemistry] inactive,’ Al is a potent pro-oxidant through the formation of an aluminum superoxide radical AlO2²+

Excitotoxin. Evidence of excitotoxic damage is common in animal models and has been implicated in human neurodegenerative disease.

Inflammagen. Human exposure to Al has been heavily linked to inflammatory cascades in a wide range of diseases.

Immunogen. The immunopotency of Al has been known for 100 years and still forms the basis for using Al as an adjuvant in vaccines. Yet, the mechanism of action is still uncertain. Compelling evidence is mounting on the toxicity of Al adjuvants in potentially susceptible patients.

Mutagen. Aluminium has been recognized as a mutagen for many years. Yet, research on mutagenicity, carcinogenicity, and teratogenicity in humans is extremely scarce.[3]

Next week, dear reader, we’ll examine other accumulators (this one will shock you, I promise), and we’ll also look into the toxic, fractal nature of this very interesting element.