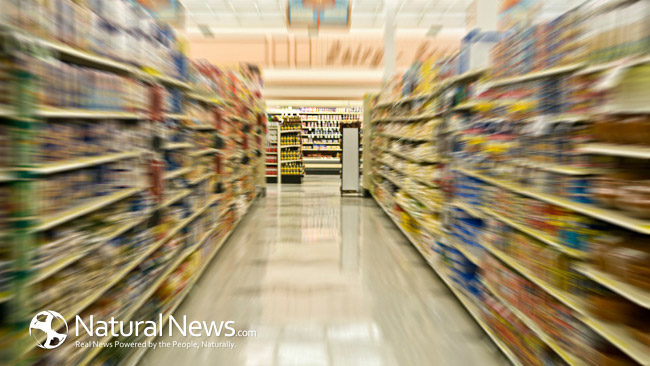 Toxic BPA is found in the lining of the majority of cans on the shelves of grocery stores. Researchers analyzed the interior linings of 192 food cans containing vegetables, fruits, soups, broth, gravy, milks, and beans. They found 129 of the cans — or 67 percent — contained BPA-based epoxy in the lid and/or body of the cans.

The findings of this recent report are quite alarming. In recent years, there’s been an enormous demand by consumers to eliminate toxic BPA packaging. However, in spite of consumer demand, major canned food manufacturers, like Campbell’s, Del Monte, General Mills, McCormick, and Nestlé still use toxic BPA in food packaging.

Toxic BPA is still in many popular brands of canned food

BPA is short for Bisphenol A — an industrial chemical that has been used to make certain plastics and resins since the 1960s. Epoxy resins are used to coat the inside of metal products — like water supply lines, bottle tops, and food cans.

Bisphenol A, or BPA, is an endocrine-disrupting chemical that affects our hormonal systems and may contribute to a number of harmful health effects — including breast and prostate cancer, obesity, asthma, attention deficit disorder, infertility, and type-2 diabetes.

Research shows that BPA can seep into beverages of food from containers made with BPA. According to the Mayo Clinic, “exposure to BPA is a concern because of possible health effects of BPA on the brain, behavior, and prostate gland of fetuses, infants and children. Additional research suggests a possible link between BPA and increased blood pressure.”

Researchers of this latest report on BPA noted the following:

“The continued presence of BPA — and potentially unsafe alternatives — in the lining of canned foods has resulted in ongoing hazardous exposures to workers, low-income populations, pregnant women, children and other vulnerable populations.”

Study of Bisphenol A in lining of canned food

A team of researchers set out to analyze the interior lids and coatings of close to 200 canned foods collected in 19 states in the U.S. and one Canadian province. Their goal was to find out whether bisphenol A (BPA) is still being used by retailers and major national brands of canned foods.

In addition, the researchers wanted to determine what materials manufacturers and retailers were using as replacements for BPA-based epoxy.

The alarming and disturbing findings of this latest study were noted as follows:

“This report validates our concerns that, despite consumer demand for BPA-free cans, 67 percent (129 of 192) of the cans we tested contained BPA-based epoxy in the body and/or the lid. Our investigation also found, for the first time, that some retailers and brands have replaced BPA with PVC, made from vinyl chloride, a carcinogen.”

Researchers of this latest report went about surveying leading national brands and retailers of canned food to find out what policies they enacted to eliminate the use of toxic BPA and avoid using inadequate and poor substitutions for this hormonally active chemical.

As far as national brands like Campbell’s and Del Monte are concered — it appears as though they are doing very little.

For example, Campbell Soup Company — a leader in the canned food industry — is grossing more than $2.4 billion in sales annually. In 2012, they promised its shareholders that the company would eliminate the use of BPA in can linings. However, according to Campbell’s estimates, the company “is still one to two years away from full-scale conversion,” according to this new report on BPA in canned foods.

Though the company claims to be making considerable progress in its shift away from BPA, product testing showed 15 out of 15 Campbell’s products analyzed tested positive for BPA-based epoxy resins.

Concerning Del Monte Foods, the company has not provided the researchers of this report a timeline when they plan to move away from using BPA. Del Monte Foods — one of the country’s largest producers, distributors, and marketers of canned foods in the United States — generates nearly $1.8 billion in annual sales. The testing results of their products showed 10 out of the 14 Del Monte cans analyzed tested positive for BPA-based epoxy resins.

Here is a short list of more findings in the BPA report:

BPA, or bisphenol A, is a synthetic estrogen. Health experts recognize BPA as an endocrine-disrupting chemical because of its effects on hormone systems. Studies show that exposure to even low doses of the chemical may increase the risk of breast and prostate cancer, type-2 diabetes, infertility, obesity and attention deficit hyperactivity disorder.

According to the U.S. Centers for Disease Control and Prevention (CDC) 93 percent of Americans tested have detectable levels of BPA in their urine. This suggests that people are consistently exposed and re-exposed to BPA because of the chemical’s presence in foods and from other sources.

BPA has also been detected in breast milk, amniotic fluid, and umbilical cord blood, suggesting that babies are exposed to BPA as newborns and even before birth.

Consuming multiple servings of canned food — especially cans with higher levels of BPA — have been shown to result in poor, most unpleasant, and sometimes deadly health effects.

These include the following:

The team of researchers of the BPA report suggests that companies should investigate the safety of BPA alternatives they are considering or already using for canned food lining. Using a can-lining material that is found to cause deadly human health and environmental outcomes may put the public’s health at risk and ruin a company’s reputation.

A screening method now being used by leading companies around the world called GreenScreen® for Safer Chemicals provides information about chemical hazards.

There is a need for complete and understandable chemical information — this is one reason why regulators and companies are progressively using GreenScreen® for Safer Chemicals. This chemical hazard assessment tool evaluates environmental and human health information about BPA hazards; and it identifies where important information is missing, as well.

Consumers will have to wait until, either manufacturers voluntarily remove harmful chemicals like toxic BPA and other hazardous alternatives from food packaging, or federal policy mandates the removal of these harmful chemicals. Until then, health experts from this latest study suggest that consumers take their own initiative to protect themselves and their families the following ways:

One final consideration. Discount dollar stores continue to grow across the United States. For the most part, dollar stores are in rural or low-income communities. People who live in these areas often have limited access to quality medical care, healthy and fresh food, and public services that are critical to overall health.

Moreover, dollar stores are often the only store in these areas selling necessary household goods, including food. More often than not, fresh produce is not available or affordable for these families, so they regularly buy canned food from their local dollar stores.

The findings of this BPA study show that “almost all dollar stores stock their shelves with canned food containing BPA-based can linings.”

The researchers note the following:

“More than 140 diverse environmental justice, medical, public health, community, women’s and other organizations have joined the campaign’s call on dollar store chains (including Family Dollar, Dollar Tree, Dollar General, and 99 Cents Only) to adopt chemical management policies to phase out harmful chemicals from their products, including hazardous linings in canned foods.”

Nevertheless, safer packaging is currently available for many types of foods — including glass containers and paperboard-based packaging. Manufacturers should make a commitment to shift their packaging to safer forms until safe and effective replacements for toxic BPA in cans are developed.

In the meantime, perhaps it’s wise for consumers to consider being more frugal in their quest for better, safer, and healthier food alternatives — by avoiding products packaged with BPA.