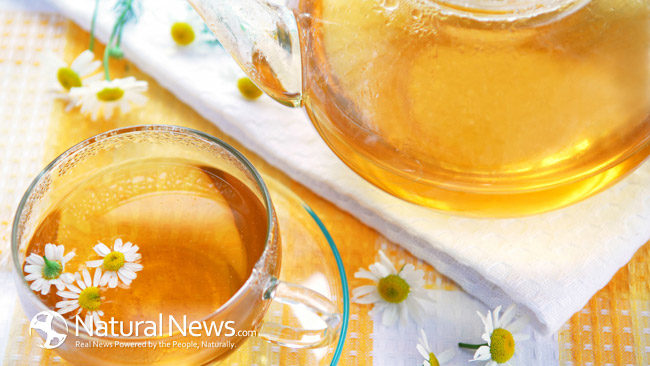 Especially since the 1990’s, consumption of herbals teas in the United States has grown dramatically. For many people, this is because they want to avoid caffeine or simply because they like the taste. Because of this, a wider variety of herbals teas than ever is now readily available to American consumers. However, apart from their delicious flavor, there are other benefits to be had from drinking herbal teas. Some of these teas, in fact, contain potent plant compounds which are biologically active and which can help treat a variety of ailments from the mild to the severe. Read on to find out more about the top healing herbals teas – as well as what they can do for the body.

While it is best-known for its ability to relax the mind and to promote restful sleep, chamomile has other uses as well. Tea made from this delicate, daisy-like flower can reduce inflammation and is excellent for a number of digestive problems. (1)

Ginger has long been used to treat nausea, morning sickness in pregnant women and poor digestion in general. It is botanically related to turmeric and shares many of turmeric’s most valuable properties: it is a strong anti-inflammatory and anti-oxidant. (2)

Rooibos tea, prepared from a cultivated, South African shrubs, is valued not only for its robust taste but for its medicinal properties. It, too, contains powerful antioxidants that have been known to improve heart health and also ward off cancer development. (3)

Tea made from valerian root is one of the best known natural sedatives and when taken before bedtime, can help someone achieve a good night’s sleep. It can also be used for digestive complaints, a variety of neurological issues such as ADD and seizures. (4)

Echinacea, or purple coneflower, was long used by the Native Americans and later by European settlers and was highly valued as a tonic. It is known today that Echinacea is able to boost the immune system and make it easier for the body to fight off illness and infection. (5)

Peppermint is also best known for its ability to improve digestion and ease down heartburn or an upset stomach. It is also useful for promoting oral health and fresh breath, which is why it is used in products like mouthwash. One of its active ingredients, menthol, is also a natural pain killer. (6)

Dandelion tea has been used for centuries and is considered to be one of the most effective tonics for both the kidneys and the liver. It increases urination to cleanse the kidneys and also boosts the detoxification process of the liver to improve the health of the entire body. (7)

Thus, from easing stress to improving digestion to help promote the health of the liver, these powerful healing teas are not only delicious, they can have a real and positive impact on a person’s long-term health.