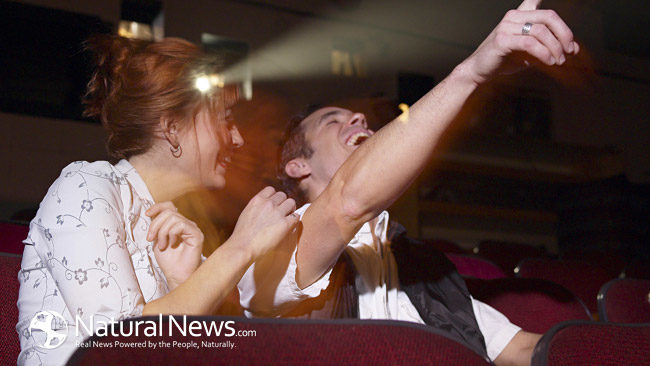 Of any other genre, the romantic comedy is one of the loosest in terms of its definition. Most comedies released have a romantic thread to their story (what is a better character motivation than love?), but the romantic comedy is a breed of its own. This list compiled here specifically adheres to the “rom-com” qualifications, which is to say that it builds the arc of the romance through a series of comedic incidents, usually utilizing a highly conceptual driving force.

Knocked Up ≠ Romantic Comedy. While the script is well written and hilarious, the relationship built between Ben and Alison isn’t built through comedy. When the story is boiled down to its core, it is about Ben coming to terms with adulthood, or perhaps two people accepting a life they hadn’t planned on. The comedy enhances the drama, not the romance. It is closer to a dramatic comedy than it is a romantic comedy.

13 Going on 30 = Romantic Comedy. Here the romantic arc is evolved though Jenna constantly dealing with fish-out-of-water situations that either result in her looking like a buffoon or her saving the day with some over-the-top situation. Plus, it is driven forward by the fantastical concept that she is a 13 year-old girl trapped in a 30 year-old’s body. Perhaps not really original, but it epitomizes the genre.

Before the countless scandals that surrounded star Mel Gibson, he was still riding a career of charm and success without controversy. The epitome of his appeal can be found in this guiltless pleasure that also marked the directorial debut of screenwriter Nancy Meyers. After hitting his head, a male chauvinist marketing executive suddenly finds he has the ability to hear the inner most thoughts of women. A big concept with an amazing supporting cast of talented women make this a top notch Rom-Com.

A priest and a rabbit walk into a bar… It is an odd premise for a romantic comedy to follow two men of religion, but this is hardly a film infused with a religious slant. Edward Norton directs Ben Stiller, Jenna Elfman, and himself in this love triangle between three best friends that shows the importance of friendship, love, and faith in mankind. It is as endearing as it is hilarious.

I Have Found It is a 2000 indian Tamil movie based on Jane Austen’s novel Sense and Sensibility. In this Bollywood rendition of Jane Austen’s “Sense and Sensibility,” a single mother and her daughters lose their country estate. Two of the girls — Sowmya (Tabu) and Meenakshi (Aishwarya Rai) — are of marriageable age, but Sowmya is branded “unlucky” after her fiancé decides to commit suicide. Meenakshi, however, appears to find love in the form of a poetry-loving businessman. Still, many hurdles remain as both girls struggle to find the right man and keep the family’s finances in order.

It may be the height of schmaltz, but this film embraces and uses the schmaltz as an asset. After meeting by chance in a New York department store, Jonathan and Sarah bond over their happy accident, but leave it up to fate to bring them back together. Serendipity‘s awareness of the fantastical conventions usually found in the genre make this film a lot of fun. All-stars of appeal John Cusack, Kate Beckinsale, Jeremy Piven, and Eugene Levy head up this irresistible love story.

Unexplainably, this romantic comedy became one of the highest grossing independent films of all time. Audiences were drawn to Nia Vardalos’s comedy about the pressure to get married as one ages. She charmed audiences with an alternative option to the glamorized leading ladies that usually dominate the genre, and the talented actors that make up her outrageous family are absolutely unforgettable. Uses for Windex haven’t been the same since.

Reteamed for the first time since the wonderful film The Wedding Singer, Adam Sandler and Drew Barrymore charm their way to fans hearts once again. Barrymore plays a girl who suffers from a form of memory loss that resets when she falls asleep, forcing Sandler’s character to constantly pursue her until she remembers him. It is cute beyond belief, and actually wraps up somewhat unconventionally.

The “here’s what you gotta do” film has become a subgenre of romantic comedies, stemming from the conventions set up by the Cyrano de Bergerac tale. Hitch is the pinnacle of these films, finding the hysterical Kevin James as the apprentice to Will Smith‘s ‘love doctor’. Smith guides James through the obstacles that most men face when trying to ask out a woman they are interested in, while Smith himself faces the inexplicable foolishness that comes with falling in love. It is a glossy Hollywood production, but deeply entertaining.

As Neil Sedaka once said, “Breaking up is hard to do.” This Apatow produced film finds Jason Segel in his first leading role as the heartbroken Peter, who flees to Hawaii to get his mind off his ex, only to wind up in the hotel room next to her and her new lover. This is a romantic comedy that really puts an emphasis on the latter part of the category. In a genre dominated by films targeted at femailes, Forgetting Sarah Marshall provides a really funny alternative for both her and him.

Love stories aren’t usually for the aging. Most characters over the age of forty tend to only exist to give the younger characters guidance and advice, but here Emma Thompson and Dustin Hoffman find that love awaits them as they enter the twilight of their lives. They play two strangers who meet at an airport bar in London, and just as a virile young man would, he pursues her until she lowers her defenses and lets him into her world. It is a delectable and quirky little film played winningly by its leads.

The term “bromance” came about in the later part of the decade and is exemplified by this title, the best the subgenre has to offer. Paul Rudd and Jason Segel star as two men who meet and slowly build a friendship with one another. It may be seen as more of a straight-up comedy than a RomCom, but it uses the conventions of a romantic comedy to bring the two men together. While they might not be pursing a romantic relationship, there is no doubt that this is a story about falling in love. Plus, it is quite funny.

This entry was written by Time sandle. he blog at Movieclickz  blog, an interactive media website which discusses hot Kollywood news.