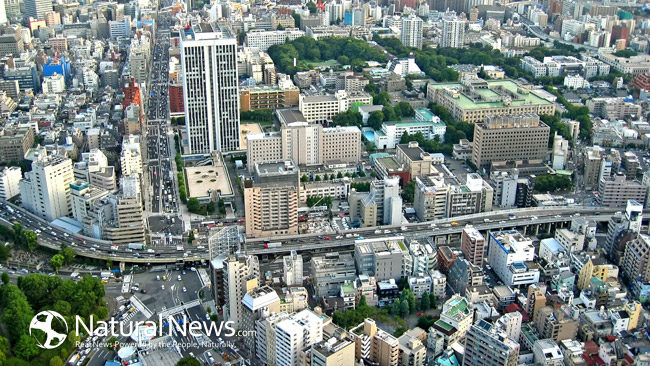 The Japanese Government has announced that TEPCO ( Tokyo Electric Power Company ) will be the Main Sponsor for the Tokyo 2020 Olympics. Truth is stranger than fiction, you just can’t make this stuff up.

TEPCO, thats right, the same company behind the biggest Nuclear Disaster Cover-up in human history. TEPCO’s slogan for the Games is ” Giving Our Olympic Athletes The Energy They Need “. A barrage of sarcastic jokes could be employed here if it wasn’t for the seriousness and urgency of the situation. How the Japanese Government in conjunction with the Japanese Olympic Committee  ‘( JOC ) and the International Olympic Committee  ( IOC ) can endorse TEPCO as the main sponsor is beyond me. I can only imagine how the people affected by the disaster must feel.

Lets consider this for a moment, coming up on the 4 year anniversary of the disaster, there are still 140,000 people still ‘ officially displaced ‘. The Central Government has divided the land into three zones, ‘ never to return ‘ and  ‘return for short periods ‘ and ‘ in preparation for return ‘. If your house happened to fall into the ‘ never to return ‘ category, you had well and truly lucked out. Some of those families have been shuffled in and out, of as many as 10 shelters since the disaster.

As the Japanese Government spends billions of dollars on the new Olympic Stadium and $385 Million on Hydrogen Fuel Cell Technology for the 2020 games, there are still 1000s of families uncertain about their future. Is it too much to ask that those people who have been displaced by the disaster should receive traditional Japanese hospitality, such as new homes and the rebuilding of communities. The government along with TEPCO should work to speed up the process of compensation. If you consider that 90% of those people who have died after the initial disaster were over the age of 65, the Government needs to be doing more to help the elderly.

The Tokyo 2020 Organizers have stated that their goal for the games is ‘ to achieve a warm n cuddly Games ‘ and statements like “Hug Fest’s between athletes like those seen in the Women’s Snowboard Competitions at Sochi – will be mandatory. All athletes regardless of sexual orientation, will hug their teammates before and after each event. For spectators, flash-mob hugging sessions are encouraged “.

I hope I’m not the only one that sees the hypocrisy here. Wouldn’t it be nice if the Japanese Government showed the 140,000 ‘ officially displaced ‘people the same hospitality offered to the visiting Athletes. Prime Minister Shinzo Abe has publicly stated on numerous occasions that the unique Japanese cultural sense of ‘ omotenashi ‘ was a major factor in winning the bid for the 2020 Games. Lets not forget that the 140,000 ‘ officially displaced ‘ are Japanese.

Unfortunately I see this as another sign of the degeneration of society. When you have all charges against TEPCO Officials dropped, when you have the Government spending billions on simulated pre-determined outcome sporting events, when you have the Japanese Mafia in charge of the Fukushima clean up process, when you have homeless Japanese being recruited to work in the clean up of nuclear material, when you have Tokyo officials claiming that ‘ radiation doesn’t affect people who smile ‘ and that ‘ Fukushima residents should be thankful,  because now they are world famous ‘ then we are living in a society that has had our moral compass sucked into a black hole.

I have been based in Japan since 2004 where i worked for 3 years as Head Tennis Coach for Japan Institute of Sports Science in Gifu.
From 2007-2013 i held a teaching position at the University of Asahi. The main part of my job however has been travelling to tournaments for the last 10 years as a coach, where i am on the road about 32 weeks of the year.
I am also currently a member of the Dunlop International Advisory staff and at the moment I am working privately with a womens player Shiho Akita from Japan.