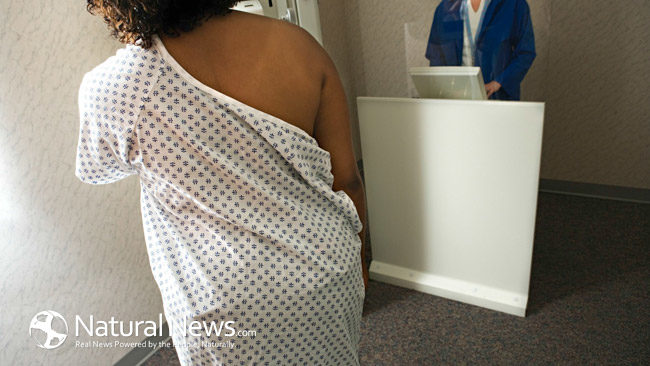 But mammogram testing is not harmless.  In fact, mammograms are considered by some in the medical community to be so dangerous as to even promote the development of cancer, due to the heavy amounts of ionizing radiation mammograms use.  A single test can expose you to the same amount of radiation as 1,000 chest X-rays—that’s nearly the equivalent of three chest X-rays per day for a year, an amount if seen from that perspective certainly gives one pause.

Indeed, according to top cancer expert Dr. Samuel Epstein, “The premenopausal breast is highly sensitive to radiation, each 1 rad exposure increasing breast cancer risk by about 1 percent, with a cumulative 10 percent increased risk for each breast over a decade’s screening.”

More importantly, mammograms an almost negligible ability to prevent cancer deaths, according to the New England Journal of Medicine.  A September 2010 study found that mammograms only reduced cancer death rates by .4 deaths for every 1,000 women who received annual testing for 10 years, which means that only 1 breast cancer death was averted per 2,500 women.

What most doctors won’t tell you, however, is there’s a safer, far more accurate alternative.  The technology, called thermography, does not rely on radiation, but instead scans for heat levels in the body to detect inflammation.  It’s so safe in fact that it poses no risks even to pregnant and nursing women.  Cancerous and pre-cancerous cells are normally characterized with inflammation first before any growth visible on by mammography, and so thermograms are able to detect cancer years earlier than any other method.

A study conducted on women who received regular thermogram screenings over a ten year period found that an abnormal thermogram scan was ten times more reliable as a risk measure for breast cancer than family medical history.  In addition, it also found that thermography was the first detector of potential cancer for 60% of the women who developed it.

According to Dr. Phlip Getson, who has used medical thermography since 1982, “Since thermal imaging detects changes at the cellular level, studies suggest that this test can detect activity 8 to 10 years before any other test.  This makes it unique in that it affords us the opportunity to view changes before the actual formation of the tumor.  Studies have shown that by the time a tumor has grown to sufficient size to be detectable by physical examination or mammography, it has in fact been growing for about seven years achieving more than 25 doublings of the malignant cell colony.  At 90 days there are two cells, at one year there are 16 cells, and at five years there are 1,048,576 cells—an amount that is still undetectable by a mammogram.”

Not only are thermograms better early predictors, they are far less likely to produce false positives, which mammograms are somewhat known for.  The false positive rate for mammograms is 6%, which means it’s a fairly regular occurrence, and is probable to occur at least once for the majority of women who undergo annual or biannual screenings.  The result can be additional mammograms, meaning even more heavy radiation exposure, and worse, needless operations.

Thermography is safe, accurate, and non-invasive.  You can usually find one thermography testing center in most major cities, and while it’s not typically covered by insurance, it’s relatively inexpensive—the average screening costs only $250.  For any woman, or man, at any age, an annual thermography screening is the ultimate check-up tool.