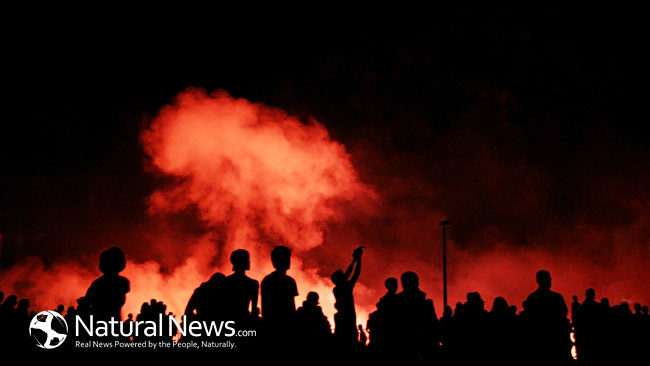 (NaturalNews) America has been wildly manipulated by the government and the mainstream media (which are one and the same, of course) into a devious scheme. The plan is to foment racial hatred and division (already accomplished), ignite violent riots (which you will see in a matter of hours) and then declare martial law in a police state crackdown.

The U.S. Department of Justice has already played a hand in this, spending taxpayer money to further magnify racial divide over the George Zimmerman trial. CNN, CBS and MSNBC have also played key roles in injecting hatred into the minds of whatever mainstream media viewers are stupid enough to still be watching those channels. This is all designed to cause the maximum racial hatred and division possible, as the White House and the mainstream media all gain power from division and chaos.

The media will now help instigate riots and race-based hatred

At this point, then, you should fully expect government and media operatives to begin instigating hate-based race riots over the next few days. This has already begun as an Associated Press reporter named Cristina Silva tweeted, “So we can all kill teenagers now? Just checking.”

This is a blatant attempt by the Associated Press to try to equate a “not guilty” verdict in a self-defense trial with out of control mass murder of children. That’s the way the mainstream media wants you to think about this case, you see, in order to maximize the potential hatred and the violence.

When the riots begin, guess who will be there to cover them? The mainstream media, of course, all while showering you with shameless ads for toxic personal care products, pharmaceuticals and GMOs in between live video showing race riots and cities on fire. As far as the media is concerned, riots are great for business. The only thing better for business is all-out war (which may soon be coming).

Race riots will give the government the justification to do things like declare martial law, immediately suspending the entire Bill of Rights for all Americans and forcing everyone to turn in their guns (which has been the plan from day one). That’s why you can fully expect government operatives to join in the coming race riots and start shooting innocent bystanders in order to escalate the violence, providing cover for Obama to declare martial law.

Note that Obama has not taken to the airwaves and called for peace? That’s because he doesn’t want peace. He wants a divided America that escalates into a race war.

Why both the White House and the media want violence, not peace

What we are witnessing right now in America is an indictment of the White House-run “sellout media” that uses its power to create division, hatred and violence. For this reason alone, every mainstream media outlet that participates in this race baiting should be permanently taken off the air and stripped of all its FCC licenses.

Because there IS a war happening in America right now: a war for control over your mind, and that war is being waged 24/7 by the media and the White House. If anybody needs to be found guilty in America today, it’s the media executives who willfully use their influence to instigate hatred and violence. They are, as the saying goes, shouting “fire!” in a crowded theater.

In the George Zimmerman trial, the media is guilty

If you feel anger over the George Zimmerman trial, you have been wildly manipulated by the media.

The media played the critical role in whipping up racial hatred in the Trayvon Martin shooting, falsely editing the 911 call recording of Zimmerman, falsely depicting Martin as a “baby,” falsely calling Zimmerman “white” when he’s actually Hispanic, publishing the home address of Zimmerman, CNN airing Zimmerman’s social security number on live television and other outrageous actions, all of which were deliberate and malicious.

Regardless of whether you think George Zimmerman is guilty of murder, the media is guilty of selective persecution in order to foment racial hatred across America. The media, in other words, is guilty of committing hate crimes.

And yet the media never covers the media’s crimes. Gee, I wonder why?

But the reality is that if any person dies in the coming race riots, their blood is on the hands of the media.

As the riots spin out of control, the government will clamp down with more police state tactics. Note that if you are a liberal in America today, you are given complete immunity to call for the murder of innocent people, including cops. As an example, check out this story from Breitbart.com:

At a “Justice for Trayvon” rally in Portland, Oregon Saturday evening, several speakers reacted to the acquittal of George Zimmerman by calling for violence, including the specific targeting of police.

According to video of the event provided by the “Laughing at Liberals” channel on YouTube, one demonstrator declared: “In my mind, every f***ing cop is a f***ing target.”

He explained that he personally, as “a person of color in this racist system,” had a long-standing dislike of the police, dating back to a police raid on his family’s home during his childhood. He also singled out Portland police chief Capt. Mark Kruger. The crowd, holding “Justice for Trayvon” signs, applauded his speech.

This person will never be prosecuted for calling for the murder of police officers. He has been granted complete immunity because he’s on “Team Trayvon.”

And so as these protesters murder police, we will see the media whip up even more hatred that results in more killings across America, all while the White House smiles and says, behind closed doors, “It’s all proceeding just as planned!”

You are all being manipulated. America is headed for a contrived, engineered race war that may very well end in a violent civil war. This is exactly what the globalists want to happen — to see America ripped apart from internal strife.

If you do not support mass murder, you are a racist

The situation is so bad now that the mere act of calling for PEACE gets you branded a “racist.” I learned this yesterday when I posted an article calling for peace and non-violence and was immediately called a racist by thousands of people on Facebook. Their position is that if you are not now in favor of killing whites, killing cops and killing Hispanics and jews, you are “racist.”

And they believe that. They will take to the streets with that attitude, and they will engage in mass murder.

I used to wonder how genocide could happen in places like Rwanda, where hoards of machete-wielding gangs would chop up all the women and babies of a competing gang (or religion, or race). Now I know exactly how it happens, because we’re seeing it unfold right here in America.