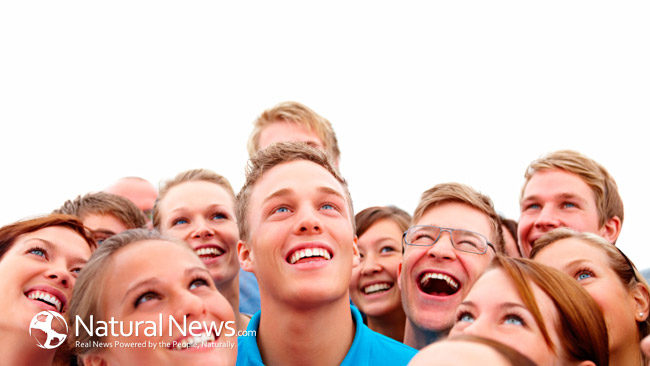 Statistician Nic Marks asks why we measure a nation’s success by its productivity — instead of by the happiness and well-being of its people. He introduces the Happy Planet Index, which tracks national well-being against resource use, because a happy life doesn’t have to cost the earth.

Nic Marks begins by saying that his dream is for us to stop thinking that the future will be a nightmare. If you look at the blockbuster films of recent times, nearly all of their visions for humanity are apocolyptic. The environmental movement has been complicit in creating this vision of the future. We have focused on the worst case scenario, we have focused on the problems, and not enough on solutions. Fear has been used to grab people’s attention, but fear is linked to the flight mechanism. Perhaps people are freezing and running away because we use fear.

It’s time for the environmental movement to grow up and think about what progress is. One of the problems we face is that progress has been based on a financial, or economic, definition – that somehow, if we get the right numbers to go up (e.g. GDP, the stock market), we’re going to be better off. We’ve known for a long time that this isn’t a good measure of the welfare of nations. We have created a national accounting system that is firmly based on production. Indeed, this had it’s time; during the second world war, we needed to emphasize production.

Marks refers to Robert Kennedy’s deconstruction of gross national product – the GNP measures everything except that which makes life worthwhile. How crazy is it that our dominant measure of progress in society is measuring everything except that which makes life worthwhile? We should focus on what makes life worthwhile, we should redesign our national accounting system to based upon such important things as social justice, sustainability and well-being of the people. People all over the world consider happiness, health and love to be more important than money. So why aren’t we thinking of the progress of nations in these terms, instead of merely how much stuff we have?

The New Economics Foundation has created the Happy Planet Index because it believes that people should be happy and the planet should be happy. The ultimate outcome of a nation is how successful it is in creating happy and healthy lives for its citizens. This should be the goal of every nation on the planet. However, we must remember that there is a fundamental input to that, and it’s how many of the planet’s resources we use.

We all have one planet that we must share. It is the ultimate scarce resource. Economics is very interested in scarcity; when it has a scarce resource that it wants to turn into a desirable outcome, it thinks in terms of efficiency, or how much bang we get for our buck. Here we have a measure of how much well-being we get for our planetary resources.

To illustrate, Marks presents a graph that plots ‘Happy Life Years’ (happiness adjusted life expectancy) against ‘Ecological Footprint.’ Western countries tend to have relatively high happiness or well-being, along with a relatively large ecological footprint. Countries like the United States are using a lot of planetary resources to achieve their well-being. On the other hand, many Latin American countries also rank high on well-being, yet their ecological footprint is significantly smaller. Living the good life doesn’t have to come at the expense of our planet.

Costa Rica ranks as the most efficient country on this graph. Life expectancy is higher than in the United States. According to the latest Gallup World Poll, they are the happiest nation on the planet. Moreover, Costa Rica has achieved this with only a quarter of the resources that are typically used in the Western world. So, what’s going on there? 95 percent of their electricity comes from renewable resources. Their government is one of the first to commit to be carbon neutral, planning to achieve this by 2021. Costa Rica abolished its army in 1949, and they invested in social programs – health and education. They have one of the highest literacy rates in Latin America and the world. Additionally, they have that “Latin vibe,” the social connectedness associated with such countries.

Our challenge is to pull the global average up, to achieve greater well-being, while reducing our ecological footprint. If you look at the trend for well-being and ecological footprint of some of the richest countries, over the last 45 years, well-being has just noticeably moved up, while ecological footprint has skyrocketed. Overall, we have become much less efficient at turning our ultimate scarce resource into the desired outcome. In other words, the Happy Planet Index has dropped significantly.

In order to reach our ecological goals for the future, for carbon emission targets to be realistic, we must change how we do things. We must change our socioeconomic structure, our organizations, our government policy, the way we live our lives. Well-being can, and should, continue to increase, while our ecological footprint diminishes. This will improve our efficiency. It will elevate the Happy Planet Index.

In systems theory, feedback loops control the dynamic behavior of a system. To achieve this control, appropriate ‘sensors’ to monitor behavior are required. If we can put the right information at the right point in time, we can effect change. An example relevant to this discussion is an energy monitoring device (smart meter) to help reduce home power consumption. These devices make information about power consumption and cost readily available to the user, thereby encouraging a response to maximize efficiency. Human beigns are very motivated by the ‘now.’ If you put a smart meter in your home and see how much electricity is costing you right now, there is immediate motivation to reduce consumption.

How can this concept be applied to society?

Society could have collective goals to improve efficiency if the proper ‘sensors’ were in place. The energy consumption of an entire nation could be brought to public attention through regular media broadcasting of such information. The achievement of (or failure to achieve) sustainability goals should be common knowledge, and should be used to drive the behavior of society. The key is timely provision of systems information to the people of that system.

On a personal level, what are the five things you should do to be happier? To answer this question, the Foresight program involved over 400 experts and included over 100 commissioned reviews of the state of the science of well-being:

The environmental community, business, government and society need to keep in mind a big-picture view of the future we want to create. We need a vision of the world that we all want. To get there, we need to pave the way with systems for improved well-being. To keep us on track we need a sign post pointing in the right direction. A marker like the Happy Planet Index can serve as this sign post. We can create a world where happiness doesn’t cost the earth.

Find out more about Nic and his work at www.nicmarks.org