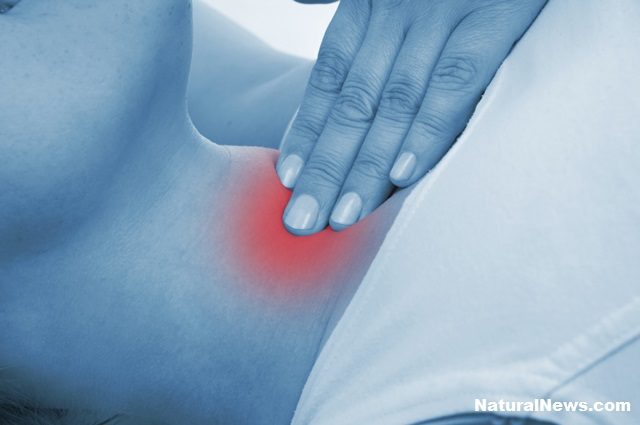 According to the American Thyroid Association, 20 million Americans suffer from some kind of thyroid condition, and close to 60% may not even be aware that they have one. Hashimoto’s, hypothyroidism, hyperthyroidism (also called Grave’s Disease), cancer of the thyroid and many other conditions that target this important gland have all skyrocketed in recent years. The majority of those who are diagnosed with hypothyroidism and Hashimoto’s are prescribed either synthetic thyroid hormone replacement such as Synthroid or Levoxil or they are given a naturally-based alternative such as Nature-Throid.

Short-term thyroid hormone replacement can be a life-saver for some. But are millions more being given the wrong diagnosis altogether, with dire consequences?

The Body’s Need for Iodine

Iodine is an essential mineral for the body. It is also a mineral that, according to some accounts, more than 70% of the world’s population is deficient in. As you may already know, iodine is needed for proper thyroid function, but it is also necessary for the brain, liver, kidneys, skin, and heart.

And research has found that there is a direct link between breast cancer, hypothyroidism and low iodine levels.  The mammary glands have a “trapping mechanism” for iodine as does the thyroid. This means that both areas “compete” for iodine stores. Thus, less iodine in the body equates to less iodine for hormonal distribution overall, both in the breast area and in the thyroid.

A common practice in the US prior to 1960 was supplementing bread dough with iodine. Shortly after this program was discontinued and manufacturers opted to process their products with iodine-blocking bromide instead, rates of hypothyroidism, Hashimoto’s and breast cancer began to increase significantly.

Is this just a coincidence? Many experts say no way.

Besides the toll synthetic thyroid medications can take on a body because of its many side effects, the thyroid hormone–breast cancer connection occurs in large part due to simple negligence on the part of the conventional medical establishment. Instead of getting to the root of the problem, they use a “band-aid remedy” in the form of thyroid replacement hormone, which does not address the real reasons behind the hypothyroidism epidemic.

Hashimoto’s: When the Body Fights What It Needs

Hashimoto’s Thyroiditis accounts for a large percentage of people of both genders who have been diagnosed with “thyroid issues.” Currently, the number is at around 14 million. Hashimoto’s differs from other thyroid-related conditions since it is first and foremost an “autoimmune” condition. This basically means that the immune system is either attacking necessary substances and mechanisms in the body because it is confused or because it is attempting to get at an underlying condition that has buried itself inside body, such as the Epstein-Barr virus.

What science does know for sure about Hashimoto’s is that immune system antibodies wind up attacking key substances which are precursors to the production of the thyroid hormones themselves.

The point is the same, however. Simply subscribing thyroid hormone will not solve the problem. What the body needs, in this case, is full-throttle healing and detoxification in order to turn the autoimmune condition around. Iodine cannot be left out of the Hashimoto’s equation. According to many experts, however, its introduction as a supplement may need to be more gradual as the body heals and autoimmune responses lessen. In addition, it is especially important for Hashimoto’s patients to introduce iodine supplementation along with other key minerals that will help with its absorption, such as selenium.

The First Step: Get the Right Test for Iodine, Bromide, and Fluoride

The first step for you if you have a thyroid condition or if you are concerned about iodine, in general, is to get your iodine, bromide and fluoride levels checked. High levels of bromide and fluoride in the body will block the absorption of iodine. Getting tests done for these three substances as well as consulting with a qualified holistic health professional about the results will help you determine how much iodine you can safely take in as well as what protocols you need to put into place for detoxification.

Unfortunately, conventional blood draws and saliva testing will not do the trick if you want to get a valid reading so make sure you get an “iodine loading” urine test. There are many well-respected labs that can do this test for you rather inexpensively and many of them provide at-home kits.

Thyroid healing can be confusing, especially since even the experts differ in their opinions about key elements like iodine! The fact remains, however, that there is a link between sufficient amounts of iodine, a healthy functioning thyroid, and breast cancer prevention. Whether you are one of the many who has a thyroid condition or not, do not rule out this vital mineral as part of your overall healing toolbox.