Why You Should Add More Purple Cabbage to Your Diet 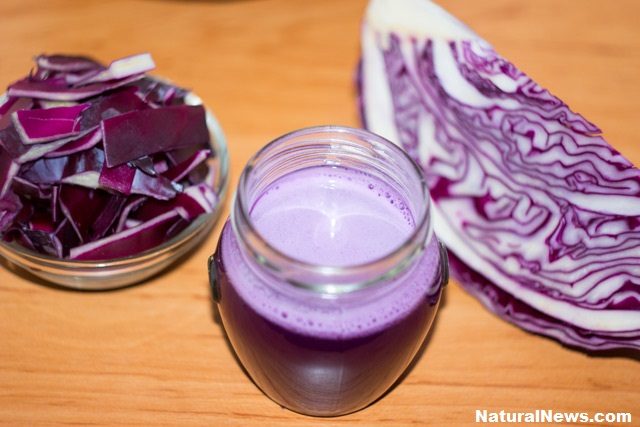 Purple cabbage, commonly known as red cabbage, is a cruciferous vegetable that tastes delicious both raw and cooked. It is eaten as salads, coleslaw, smoothies, braised dishes and pickled treats.

It surpasses green varieties in term of vitamin C and glucosinolates levels. It contains anthocyanins, one of the more than 6,000 members of the bioflavonoid family of polyphenol phytochemicals found in various plant foods, whereas, the green/white cabbage has none.

Some red cabbages are said to contain almost twice the vitamin C as compared to some green cabbages.

Raw purple cabbage offers the highest nutritional values. Conversely, cooked one may leave you with lesser nutrients which dissipate with water vapor or dissolve in the water if you simmer or boil it. On the other hand, cooked purple cabbage can help increase the bioavailability of nutrients including vitamin C, carotenoids, and bioflavonoids.

To retain optimal nutrient values, some experts suggest emulating the Chinese cooking method that is by using less water and less cooking time. If you choose to boil it, the water can be used in stocks, soups or sauces.

In Asia, it is customary to take the water along with boiled vegetables when eating rice. When boiling vegetables, Asian commonly culinary herbs such as onion and garlic, and dried anchovies (Asian anchovies are different from North American ones as they are dried under the sun, on the hand, anchovies in North America are usually preserved in tin can) or dried shrimp and salt, the addition of which produces a delectably flavorful dish.

For the rest of the article, I discuss the various nutrients found in red cabbage along with some interesting facts about nutritional value differences of red cabbage versus white cabbage.

Probably most of you think that navel oranges are the best dietary source of vitamin C. Surprisingly, raw red cabbage provides more vitamin C than fresh oranges (raw, all commercial varieties). One ounce (28 grams) of raw purple cabbage contains 27 percent of the Daily Value (DV) for vitamin C, whereas an equal-size serving of oranges contains 25 percent of the DV for the same vitamin.

When DV for vitamin C of purple and green cabbage varieties are compared, the latter found to contain 17 percents of the DV.

Vitamin C is a vital co-factor to build and maintain collagen, proteins that help keep your skin, bones, and teeth healthy. It is revered as one of the most potent antioxidants, which helps improve the immune system function by supporting and energizing it.

Anthocyanins are considered healthy for humans because they offer a wide range of biological activities, including powerful antioxidant, anti-inflammatory, anti-anxiolytic, antimicrobial, and anticancer. They exert a variety of beneficial effect on blood vessels, platelets, and lipoproteins, all of which are thought to help reduce the risk of coronary heart disease.

Animals and human studies have suggested that in the prevention of  cardiovascular disease (CVD), cognitive decline, and cancer has been linked to their antioxidant properties. However, recent studies suggests that anthocyanins’ health benefits would more likely result from unidentified chemical properties beyond their antioxidant capacity.

Improves memory and cognition and reduces anxiety in dementia

A study has shown that anthocyanins may help improves memory and cognition in older adults with mild-to-moderate dementia. Another study shows that pre-administration of anthocyanin on memory and anxiety prevented the effects caused by streptozotocin-induced sporadic dementia of Alzheimer’s type (SDAT) in rats. The authors of the study in their conclusion statement state that anthocyanin is able to enhance memory and act as an anxiolytic (anti-anxiety) compound in animals with SDAT.

The anthocyanin effects on humans experiencing dementia are not known. Anyway, there is no harm of taking foods rich in anthocyanins regularly including purple cabbage as its antioxidant properties may one day be demonstrated to be beneficial for Alzheimer’s disease and dementia.

Studies have shown anthocyanins exert benefits on the lipid profile in many animal models. A study involved 120 participants (age 40–65 y) with high lipid levels were given 160 mg anthocyanins twice daily or placebo for 12 weeks in a double-blind, randomized, placebo-controlled trial. The supplementation of anthocyanins has shown a decreased LDL cholesterol level and increased HDL-cholesterol levels.

Scientists believe that one of the major mechanism by which HDL protects against atherosclerosis is cholesterol is transferred from atherosclerotic lesions macrophages to the liver, thus decreasing macrophages HDL-cholesteryl ester content and subsequently excreting cholesterol into the bile.

This is what I believe how antioxidants increase HDL and decrease LDL. When you eat foods containing antioxidants, cholesterol whether in lipoproteins or cell membranes are protected against free radical attacks.

There is a hypothesis that believed increased cellular cholesterol could potentially protect plasma membranes, and hence cells, from attack. Many experts believe that low HDL and high LDL reflects that the body is assaulted by free radicals and possibility many cell membrane components are damaged.

It is well known that antioxidants help protect the body by neutralizing free radicals that attack cell components (cell membrane and DNA), enzymes and neurotransmitters. Anthocyanins are one of many bioflavonoids studied by scientists for their protective effects against cancers.

Glucosinolates are precursors to biologically active isothiocyanates which have been shown to be anti-carcinogenic (destroys carcinogenic substances) and may inhibit cancer cell proliferation.

White cabbage was shown to contain high levels of glucosinolates, much higher than many other Brassica vegetables, but red cabbage had even higher levels!