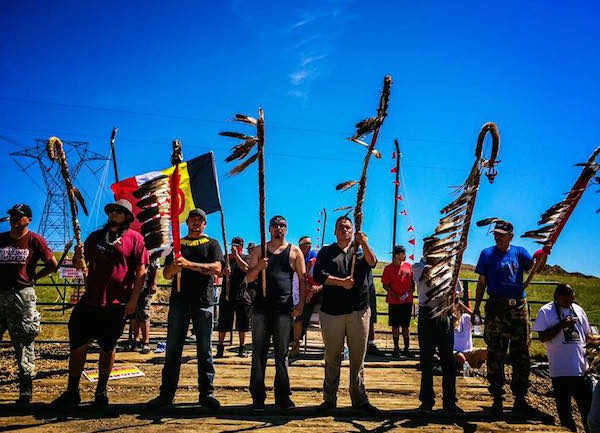 What the world has witnessed at Standing Rock is an unprecedented coming together of Tribal peoples and representatives of indigenous cultures from around the world who understand the urgency of protecting the sacredness of the water and the land.
Standing Rock marked a turning point in our nation’s history as American Veterans came to stand between international corporate mercenaries and the First Americans. Veterans came to stand with their Tribal brothers and sisters in defense of the land, the water and constitutionally guaranteed rights. As they acknowledged the atrocities that separated these great peoples, they also sought forgiveness for the horrors of the past. Standing together to protect that which is sacred, a great healing began. This represents a monumental shift in the consciousness of the people of the United States.
The Spirit of God is in the water, the land, the trees and all of nature. All of nature is sacred and so are we. We are not mere stewards of this planet. We are her children. We are sovereign. The onslaught of violence against our Mother Earth has also been an onslaught against us as her children and against our sovereignty.

The control or confiscation of land and water, the assault on the health and well-being of life, all for the sake of controlling the resources of this planet is the centuries old model for the false paradigm. The Agenda 21 and 2030 models of environmentalism that separates us from our mother and supplants our relationship with layers of bureaucratic jurisdiction is just as false as the model of corporate confiscation that is exemplified by the Black Snake of the DAPL. Both remove the people from the land and give all authority to a few controlling globalists. Both serve to violate the sacred relationship between the Mother and Child. The symbolism in this violence is not lost on us.
The Long Nights Moon of December holds vigil over Standing Rock. The December moon brings a time of introspection and self-examination. Symbolically, it is a time of death and rebirth. It’s a time for casting off that which has proven untrue or deceitful; a time for reshaping the direction of our path. So too is it a time for our country to cast aside the false paradigm of dependence, lack, confiscation and control. We must restore our relationship with the sacred.
The coming together of Water Protectors and the Veterans represents a cognitive shift in perspective. Our ancestral participation in the Manifest Destiny was but a prelude to WWI and WWII, Korea, and the Middle East. The prospect of war with Russia so zealously propagandized by candidate Clinton is still spuriously promoted by President Obama. American troops are being positioned to again serve the will of a false paradigm.
Global corporatists and social technocrats are aligned in their rush to control the resources of the entire planet. Technocracy has no need of the sacred or sovereign. Instead, that which is devoid of life would supplant the sacredness of all life and consciousness with the sacrilege of an artificially intelligent post human technocracy.

As the long nights of introspection give way to the re-birthing of life, we must find both the will and the wisdom to reclaim the sacred in ourselves, in our land, in the water, and in our future.

The Water Protectors remain encamped in the snow and blizzard conditions to safeguard their land from the Dakota Access Pipeline. The whole world is watching. In solidarity, we are all standing watchful and determined. The path forward must be a sacred path. We each claim the sovereign responsibility to heal ourselves, our water and our land.

Let the coming together of the Water Protectors and the Veterans set an example for the reuniting of our beleaguered and election weary Country. Let the courage of forgiveness and true healing lead us forward. May our next President rise to the responsibility of leadership that healing this sacred nation requires.