Staghorn Sumac – It Is Not Poison, It Is Therapeutic 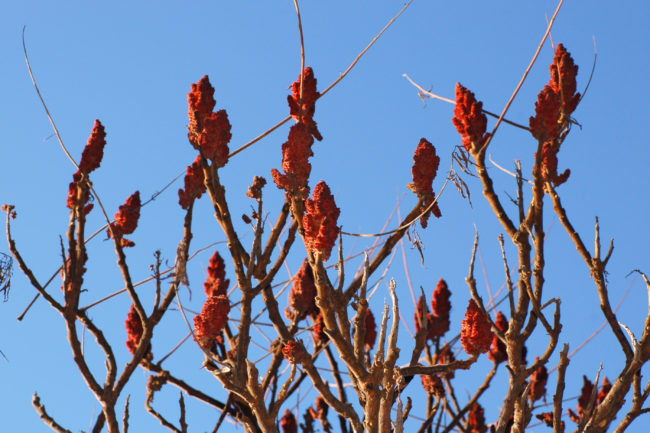 Perhaps you have heard of poison sumac, but you likely have not heard of the Red Sumac Berry (particularly Staghorn Sumac). These red berries grow all over my home state of Pennsylvania but could be found all over the world. Staghorn Sumac is more likely to be found within the eastern half in the United States. It blooms particularly around June to July, maturing from August to September. Staghorn Sumac berries could help make a delightful, healthful drink!

Is It Poison or Therapeutic?

Raw Sumac bran of the Red Sumac Berry was found to have an antioxidant value described in ORAC (Oxygen Radical Absorbance Capacity) units as 312,400 μ mol TE/100g. The ORAC system was developed by the National Institutes of Health in Baltimore, measuring antioxidant capacity in foods. When compared with other foods on the ORAC Chart, Sumac bran was at the top! Sumac bran topped many superfoods such as Turmeric, Oregano, Cinnamon and Ginger! The powerful antioxidants in the Red Sumac Berry contribute to its ability to neutralize free radicals, hence lowering the risks of cancer and disease. (More information on antioxidants found here)

Has History in Therapeutic Use –

According to the Michigan University State Extension, American Indians used Sumac Berries “to treat colds, fever and scurvy while also grinding the berries mixed with clay and using as a salve on open wounds.”

Some Beneficial Studies Done On Sumac –

Among the most popular ways to utilize the medicinal properties of Staghorn Sumac Berries, making Sumac tea gives it the name “Sumacade.” It is a tart drink (contributed from the ascorbic acid, Vitamin C) that users tend to make either hot or cold. Controversy over the fact Vitamin C may be lost due to heart, has led certain recipes to serve cold and often overnight, in the fridge (Related: “burnt” or oxidized teas promote “cancer-causing chemicals?”). For whichever temperature you may enjoy, the basis is to soak the berries (crushed for more flavor) in water for several hours, then strain with a cheesecloth or coffee filter. If you do not prefer tea, you can make a tincture! Enjoy the medicinal benefits of Staghorn Sumac!