Snow job: If government spying on all Americans is such a good thing, then why is it being conducted in secret? 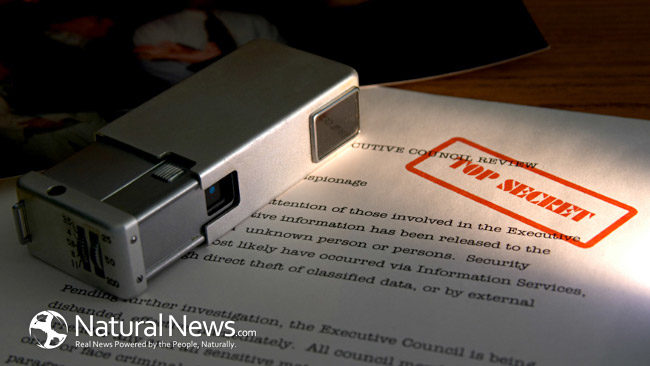 (NaturalNews) In the run up to the 2012 election, why didn’t Obama campaign on the promise that he would keep Americans safe by spying on all our phone calls, emails and electronic communications? After all, Obama says he completely endorse the program, insisting that Americans will have to put up with a “little inconvenience” in order to be more secure.

So why not run on that platform? “Hey, America, I’m the SPY President! Vote for me and have all your emails read by caring government professionals who keep you safe!” Instead of being the “Hope and Change” candidate, Obama could have been an advocate for “Snoop and Chains!”

Obama didn’t run on that platform, of course, because he would have lost the election if he admitted the things he really supports: secret military prisons and illegal torture, secret kill lists of American citizens, unarmed drone strikes on women and children, the continued criminalization of pot and industrial hemp, the continued Big Pharma monopoly over medicine, the DHS arming against the American people, and of course the over-the-top NSA surveillance machine that listens to all your phone calls and reads all your emails.

A candidate who openly admitted to supporting all the things Obama is now doing would be ridiculed… laughed off the debate stage and maybe even run out of the country. But by lying to the American public about all these things, Obama got elected. And once elected, he pushed the expansion of these programs, blowing out trillions of dollars in federal spending while multiplying the power and reach of the Big Brother police state surveillance grid.

But it’s all okay, he says. You didn’t need to know about all these details because the government was keeping you safe. And yes, you can trust government as long as Obama is in charge, you see.

Besides, you don’t have anything to hide, do ya?

YOU have nothing to hide, but WE do!

The government wants to have it both ways: YOU don’t need any secrets because you have nothing to hide, right? But WE (the government) need all sorts of secrets. And why? Because our secrets keep you safe!

The very idea that only guilty people have something to hide turns out to indict the government itself: the very fact that they are running all these surveillance activities in total secrecy practically guarantees they’re guilty. That’s the trick, you see: use their own logic against them. When the government says, “Trust us, we’re keeping you safe by keeping an eye on you,” your answer should be, “Well who’s keeping an eye on YOU?”

So now, in one of the most hilarious examples of hypocrisy we’ve yet seen from the world of high tech, Google is using its home page to promote the Stop Watching Us website which calls for Congress to “reveal the full extent of the NSA’s spying programs.”

The reason this is so hilarious is because Google was founded with help from the NSA and remains one of the NSA’s most important front-end psychological profiling tools. For Google to point the finger at the NSA and say, “how dare they spy on us!” should be met with obscene laughter.

Google calling for the NSA to stop spying on people would be like McDonald’s calling on the fast food industry to stop feeding fried foods to consumers.

The StopWatching.US website itself is a project of the non-profit called Demand Progress (www.DemandProgress.org), which sounds like some sort of uber-liberal activist site but really isn’t. It’s actually a group that opposes CISPA, the NDAA and Hollywood monopolistic controls over the internet. They’re also helping promote the petition for President Obama to pardon Ed Snowden as well as demanding justice for internet activist Aaron Swartz.

I completely agree with Demand Progress on all these points, but Obama completely disagrees with everything the site stands for. Obama, despite what he says, actually stands for more secret prisons, more government spying on Americans, more secret kill lists and the continued destruction of the Bill of Rights in the name of “security.”

Interestingly, about half the democratic party has surrendered to the Obama police state and is idiotically backing nearly all of Bush’s favorite policies now that Obama is the new front man. To truly brain-damaged individuals like Sen. Al Franken and Bill Maher — both of whom smoked WAY too much weed to be believed on anything — government abuse of power was bad under Bush, but now it’s perfectly okay under Obama. I’m not sure how much pot, crack, smack or meth you have to smoke in order to come to that conclusion, but somebody in the democratic party seems to be handing all that out for free.

No, the only reasonable, rational response to all of this — regardless of your political leanings — is that secret government surveillance of the American people was criminal under Bush, and it’s still criminal under Obama. It can’t suddenly be morally okay just because a democrat sits in the Oval Office, and any democrat who attempts to argue this point is only discrediting themselves.

Because this brings us back to the original question of this article: if government spying on the American people is so great and dandy, then why wasn’t it announced with great fanfare as if it were some sort of amazing new “benefit” of compassionate government?

Why wasn’t government surveillance mentioned as a selling point in the presidential debates?

Why didn’t television ads brag about how much each candidate believed in domestic spying on everyday Americans?

So enough with the bullshit from Obama, Feinstein, Boehner, Cheney, McCain, Clapper, Franken and every other nitwit who’s now trying to say this is all a wonderful government program being run by honest people who would never abuse all these billions of secret files they’re gathering on you.

My message to those crooks and liars? Nobody believes you anymore. You’re finished. Your government is finished. Your credibility has been shattered and your false, flowery rhetoric makes people want to vomit.

It’s important to bear in mind I’m being called a traitor by men like former Vice President Dick Cheney. This is a man who gave us the warrantless wiretapping scheme as a kind of atrocity warm-up on the way to deceitfully engineering a conflict that has killed over 4,400 and maimed nearly 32,000 Americans, as well as leaving over 100,000 Iraqis dead. Being called a traitor by Dick Cheney is the highest honor you can give an American, and the more panicked talk we hear from people like him, Feinstein, and King, the better off we all are.