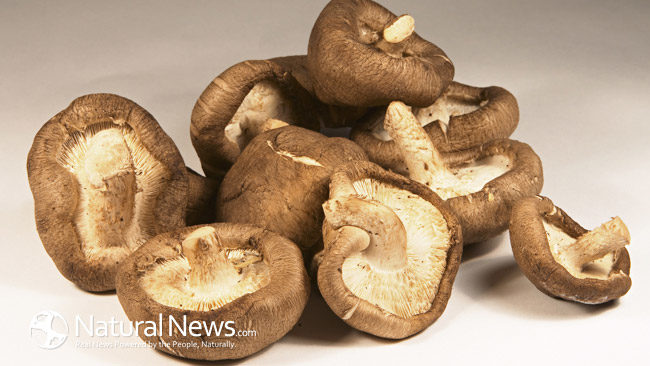 Move over chia seeds and kale?

After studying 52 healthy adults, experts from the University of Florida have discovered that mushrooms — shiitake in particular — are a health food superstar.

“If you eat a shiitake mushroom every day, you could see changes in their immune system that are beneficial,” says University of Florida Food Science and Human Nutrition Professor Sue Percival, speaking about the beneficial changes that were observed in these participants. “We’re enhancing the immune system, but we’re also reducing the inflammation that the immune system produces.”(1)

After eating one 4-ounce serving of shiitake mushrooms daily, it was observed that their before and after blood tests showed improved function of gamma delta T-cells as well as reductions in inflammatory proteins.

It’s no secret that inflammation is a key contributor that kick starts many health problems. From cancer and diabetes to heart disease and allergies, inflammation often plays a role. “It’s an underlying cause for many, many diseases,” says integrative medicine specialist Frank Lipman, M.D. Everything from stress to being overweight can cause the body to go haywire, upping the body’s inflammation levels and in turn, throwing off the body’s ability to fight certain diseases.(2)

The study was recently published in the Journal of the American College of Nutrition. Titled, “Consuming Lentinula edodes (Shiitake) Mushrooms Daily Improves Human Immunity: A Randomized Dietary Intervention in Healthy Young Adults,” the journals abstract states, “The aim of this study was to determine whether consumption of whole, dried Lentinula edodes (shiitake) mushrooms could improve human immune function.”(3)

Indeed it did; after these adults consumed the aforementioned quantity for four weeks, positive changes to their health were observed. According to the abstract:

Regular L. edodes consumption resulted in improved immunity, as seen by improved cell proliferation and activation and increased sIgA production. The changes observed in cytokine and serum CRP levels suggest that these improvements occurred under conditions that were less inflammatory than those that existed before consumption.

It’s explained in the abstract that sIgA stands for “secretory immunoglobulin A (sIgA) in saliva,” while CRP refers to C-reactive protein (CRP) in serum.

Other Health Benefits of Shiitake Mushrooms, Plus Where to Find Recipes

The fact that shiitake mushrooms have been found to be good for health has been known for some time, however experts involved in this study suggest that their findings stand out because “…very few human intervention studies have been done using contemporary guidelines.”(3)

According to the World’s Healthiest Foods site, shiitake mushrooms are on their list of the 100 healthiest foods. There, they are recognized as a great non-animal food source of iron and an excellent way to help protect the lining of blood vessels, which aids in improved heart health. Furthermore, the site explains that these tasty mushrooms are ideal ways to get in vitamins B2 and B6, as well as niacin, folate and choline.(4)

Interested in some shiitake mushroom recipe ideas? Check out these from Blisstree.com.