Sea Lettuce: A Nutritious Seaweed That Can Boost Longevity 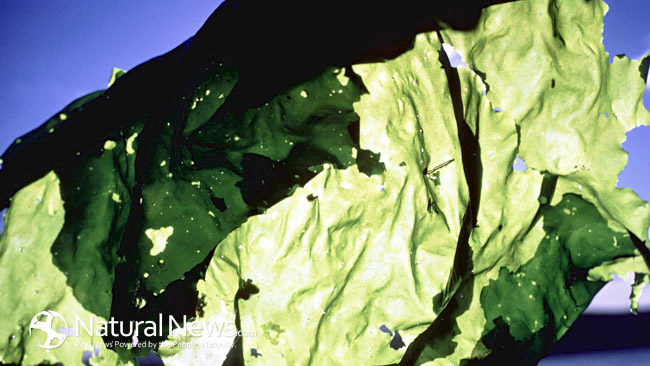 Sea lettuce is an edible green seaweed that grows along the coastlines of the world’s oceans. It is eaten by a number of sea animals including sea slugs and manatees, although humans have also eaten it for centuries. Characterized by its bright green color, lettuce-like appearance (hence the name), and somewhat waxy taste, sea lettuce can be eaten raw in salads or cooked in soups.

Compared to other sea vegetables such as nori, kombu, and bladderwrack, sea lettuce isn’t often utilized as a health supplement, even though it boasts an impressive nutritional profile.

Increases longevity – Though sea lettuce is consumed worldwide, it is especially popular in Okinawan in Japan and Crete in Greece. Perhaps it is coincidental, but the residents of these two locations are well-known for their longevity. The Okinawa Centenarian Study, for example, found that the residents of Okinawa are 82 percent less likely than the average American to suffer from coronary heart disease. Moreover, a study published in the September 2008 edition of the British Medical Journal found that the morality rate of those who favor a Mediterranean diet is nine percent lower than those who favor the standard Western diet. Seafood – including sea vegetables like sea lettuce – dominate the diets of these people, so it is possible that these mineral-rich foods are responsible for such long-term healthfulness.

Rich in vitamins – Nutrition-wise, sea lettuce almost covers the entire vitamin spectrum. 100 grams of this green seaweed provide us with 221 micrograms of vitamin A, 10 milligrams of vitamin C, 2.2 milligrams of vitamin E, 5 micrograms of vitamin K, and varying amounts of B-vitamins such as B1, B2, B12, and folate. Of these, vitamins A, C, and E are potent antioxidants that can neutralize free radical damage, thereby guarding us from a myriad of serious conditions such as macular degeneration and cancer. Additionally, this robust nutrient profile lends the seaweed excellent skin-boosting properties (this is why some natural skin cleansers, such as Alba’s Cleansing Milk, contain sea lettuce as a main ingredient).

Promotes bone health – 100 grams of sea lettuce provide us with 490 milligrams of calcium and 3200 milligrams of magnesium. While everyone knows that calcium is good for our bones and teeth, most people don’t realize that we also need magnesium to help us absorb it. Since sea lettuce is rich in both minerals, it is an ideal food for building bones and preventing osteoporosis.

Weight loss properties – Sea lettuce is an excellent weight loss food for three reasons: One 100 gram serving of it contains only 130 calories, a meager 0.6 grams of fat, and an impressive 29.1 grams of dietary fiber (which helps us to feel full after eating).

Excellent source of iron and protein – Though today’s food industry has led us to believe that meat is the best source of iron and protein, in reality algae and sea vegetables such as spirulina, chlorella, kelp, and – yes – sea lettuce match, and in some cases exceed, meat in both regards. One 100 gram serving of sea lettuce, for instance, contains an impressive 22.1 grams of plant-based protein and 5.3 milligrams of iron, approximately 25 percent of the recommended daily intake of both nutrients.